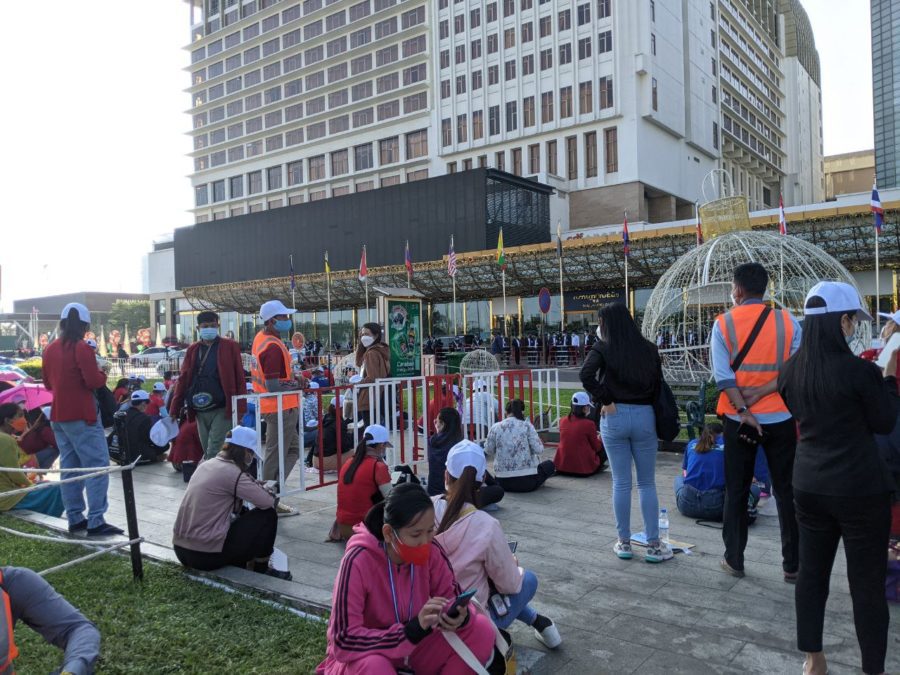 Members of the NagaWorld union sit outside a barricade at the park in front of the casino complex on the fourth day of their labor strike on December 21, 2021. (Keat Soriththeavy/VOD)

NagaCorp’s revenue dropped 74 percent and staff count by 26 percent in a year hit with Covid-19 disruptions, but the company’s acquisition of property and equipment more than doubled to $384 million amid its investment in NagaWorld 3.

Workers have been protesting last year’s mass layoffs at Phnom Penh’s monopoly casino operator, saying the company targeted union leaders and members. Amid near-daily rallies, more than 30 workers have been taken into police custody, and 11 of them remain in jail.

On Monday, as the Health Ministry shut down workers’ protests, NagaCorp released its annual statement showing revenues of $226 million last year, down from $879 million in 2020. Its loss for the year was $147 million, down from a profit of $102 million in 2020.

As of the end of the year, NagaCorp had 6,181 employees, down from 8,371 a year prior, due to “an employee rationalization program to improve cost and operational efficiency.”

“The Company believes that these changes will help with the quick return to business normality and help deliver continued financial stability over the long term,” the report said.

To reduce the layoffs’ impact on employees, the company offered a mutual separation option with compensation “over and above payments required by the application Cambodian Laws,” the report said, adding that “by and large” the “exercise has been completed.”

Of more than 1,300 staff members targeted for termination, some 1,100 were union members, according to the workers. More than 300 have yet to accept the termination: Some are demanding reinstatement, saying unionists and senior employees should be protected; while others have contested the compensation amount.

A NagaCorp press release noted that earnings before interest, tax, depreciation and amortization remained positive, at $16 million. But depreciation rose as the value of the company’s property, plant and equipment increased from $1.67 billion to $1.93 billion.

The company acquired such hard capital assets worth $384 million last year, up from $174 million in 2020, the report said.

Much of the increase is due to the ongoing construction of NagaCorp’s $3.5-billion NagaWorld 3 project, which is being built in central Phnom Penh on land that formerly housed the dilapidated but iconic White Building. Hundreds of residents were removed from the building amid contentious evictions in 2017.

In an agreement with CEO Chen Lip Keong’s ChenLipKeong Fund, some $223 million of the construction cost was borne by the fund in 2021, NagaCorp said.

Chen is using the Cayman Islands-incorporated holding company to lend $1.76 billion for the latest development. The company last year appeared in the Pandora Papers, a trove of leaked documents that detailed wealthy elites’ use of offshore firms.

As of 10:30 a.m., NagaCorp’s stock price on the Hong Kong exchange was down 2 percent, according to Bloomberg.

Updated with the company’s net loss.