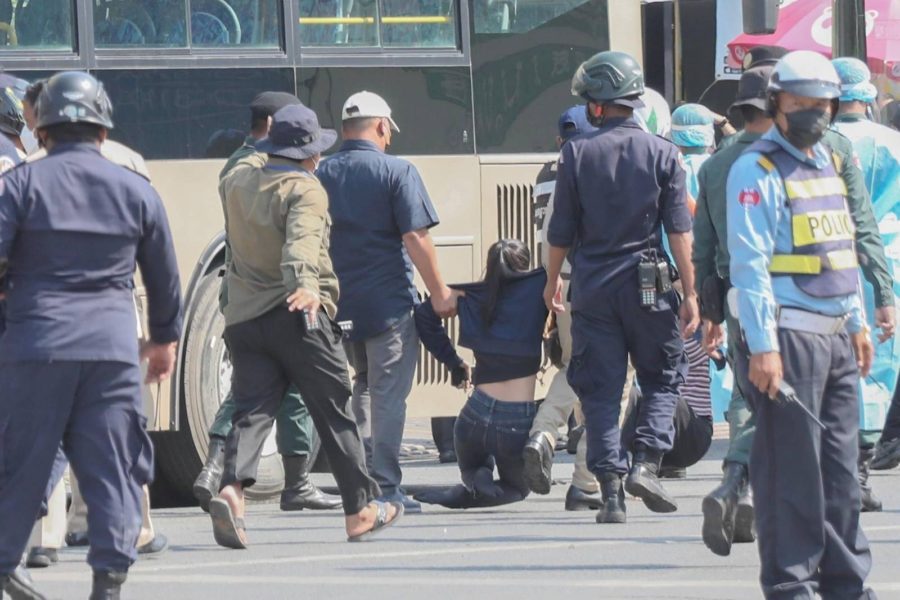 Security officials drag away a NagaWorld strike member during Thursday’s detententions. On Friday, unionists did not attempt to gather. (Photo provided by Licadho)

NagaWorld union members did not attempt to resume their strike on Friday, while most of the workers held at a Prek Pnov quarantine facility were released.

For the past four days, protesting workers attempted to reach the NagaWorld casinos in Phnom Penh but had been halted by police forces who detained them in buses and brought them to a quarantine facility. On Friday, the workers stayed away from the casino complex, leaving it unclear how their strike would continue.

One of the striking workers, Ros Lyheng, was sent to the quarantine facility on Tuesday and released only on Thursday. He said the conditions at the center were not good and that detainees had to sleep outside in the open for two nights.

“For today, I didn’t go because I felt bad when I stayed there. I did not sleep for a whole night, and on the second night I did not sleep well. So it makes me feel tired,” Lyheng said.

Union members confirmed that 48 people detained on Wednesday were allowed to leave Friday morning. Authorities had previously demanded the detainees sign contracts pledging to stop striking or pay fines of $1,250 each. The detained strikers had refused both conditions.

“I leave there and I need to find my own way [home]. I decided to leave without signing a contract and I went home on my own,” said Rithy Rathana, one of the workers released on Friday.

Twenty-seven workers who were detained on Thursday were still at the quarantine center. Two of them tested positive for Covid-19 and were sent to hospital.

Pov Raksmey, who is still at Prek Pnov, said workers refused to sign the contract because no one else had to sign such a document in the four days prior.

City Hall also released two statements Thursday night, one criticizing the workers for allegedly violating Covid-19 measures and the second one pushing back against a civil society press release alleging police had used excessive force and sexual harassment while dealing with the striking workers.

“Is it possible that the authorities can act immorally in front of people, businessmen, commuters in the city, all with many cameras, as well as other authorities who are on duty in public?” the statement read.