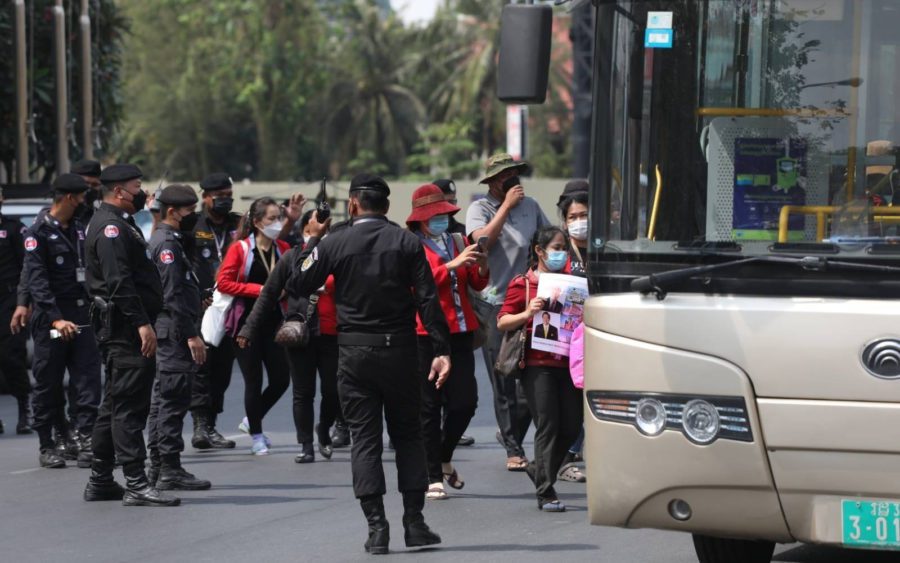 NagaWorld workers are sent to a Covid-19 quarantine facility after attempting a demonstration outside the Phnom Penh casino on March 7, 2022. (Licadho)

About 200 NagaWorld workers attempted to resume their demonstrations outside the casino complex Monday afternoon and were again loaded into buses and taken to a quarantine facility.

The strikers in mid-February were repeatedly blocked by authorities from resuming their rallies for purported Covid-19 reasons and sent to a quarantine facility in Prek Pnov. There they were kept for 24 to 48 hours and tested for the disease, with positive cases sent to hospital and those without the virus allowed to leave.

The authorities have tried to get workers to sign contracts promising not to resume their protest or attempted to fine them under the Covid-19 Law. Workers have said they resisted both measures.

Facebook livestreams from workers show around 200 workers standing outside the NagaWorld 2 casino around 1:30 p.m. in Phnom Penh on Monday. Shortly after, five city buses arrived and police officials, some in bright blue Covid-19 protective suits, started pushing and dragging workers to the buses.

Some of the workers could be seen resisting the police, who then resorted to more violent means to get them in the buses.

Ly Long Heang, one of the detained workers, said 183 workers had been detained as of 5 p.m. Monday. He said he was hit by a police officer and dragged to one of the waiting buses, marking the second time he was carted off to Prek Pnov.

“I asked that I would go myself. But he still pushed my knee angrily. My leg is hurt,” Long Heang said.

He added the workers had taken a weeklong break to self-isolate as per health guidelines.

Phnom Penh deputy governor Keut Chhe could not be reached for comment on Monday.

Civil society groups released a statement February 24 condemning the use of “state-sponsored violence” and Covid-19 measures against the NagaWorld workers to end their strike. The groups also expressed concern over tactics used by security personnel, which they said included sexual harassment.

Eleven protesters are in jail, another is on bail, while four others have been summoned by police for alleged Covid-19 Law violations.

Two of the four summoned workers appeared before the Phnom Penh Municipal Court on Friday and were placed under judicial supervision, said rights group Licadho’s Am Sam Ath.

Sam Ath said it was unclear why only two of the four workers were placed under judicial supervision. “This is the court’s decision,” he said.

Meanwhile, NagaCorp last week issued a statement that it was suspending its gaming and resort project in Vladivostok, Russia indefinitely by invoking the “force majeure” clause in its investment agreement. The company fired more than 1,300 workers last year in layoffs that workers alleged targeted unionists, leading to the ongoing strike.