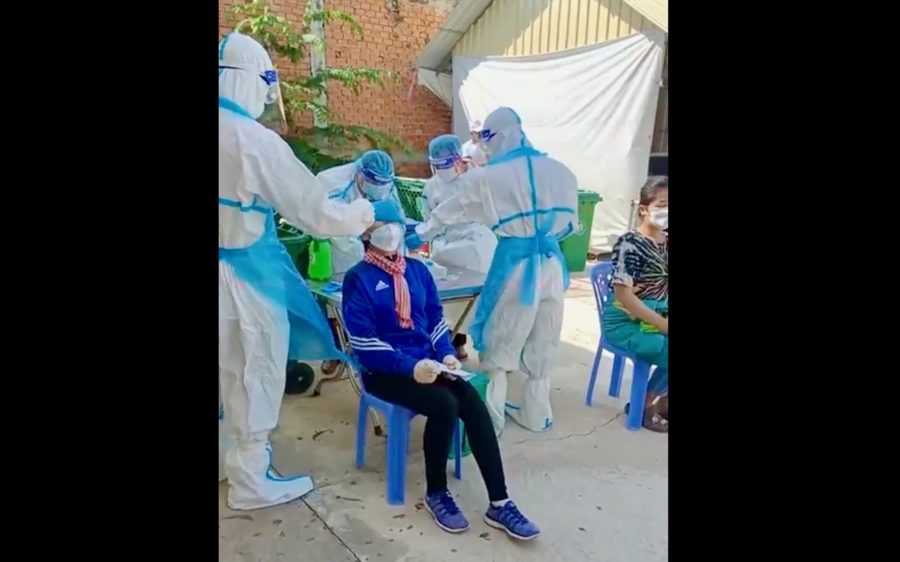 A screenshot of NagaWorld workers getting tested for Covid-19 on Wednesday morning, as seen in a livestream from one of the workers, Srey Pov.

About 30 NagaWorld strikers spent the night at a Prek Pnov quarantine center waiting for a Covid-19 test that eventually happened Wednesday morning.

On Tuesday, police and health officials continued to detain protesting NagaWorld workers near the casino complex in Phnom Penh. That afternoon, authorities took 39 workers to the Prek Pnov facility. But unlike Monday’s batch of 64 detainees, health officials did not test the workers the same day as their detention, nor make them sign contracts to leave.

However, health officials began testing workers at about 9 a.m. Wednesday morning, according to worker accounts and Facebook livestreams recorded at the facility. In those streams, workers can be seen keeping track of tests performed.

After the tests were conducted, officials can be heard saying four workers had tested positive, with the group asking for those people to be tested again. Ros Lyheng, a NagaWorld worker at the quarantine center, confirmed there were four positive cases.

“I don’t have anything to suggest besides testing the four people again. If they test again, they are positive. Please take them but we just want to [test] again,” said Srey Pov, one of the workers seen in the livestream.

A health official replied saying that was not possible and that the four workers were being placed in a separate area.

Of the 64 workers tested on Monday, two people tested positive and were sent to hospital for treatment.

Phnom Penh city spokesperson Met Measkpheakdey refused to answer questions Wednesday morning and sent reporters a copy of a City Hall statement released Tuesday night. He did not confirm the test results from the group of 39 workers.

“City Hall has eagerly appealed to demonstrators to stop illegal activity. They still violated under the pretext of holding a strike to find labor solutions by gathering through social networks and other means, and ignored health measures while Omicron transmission is spreading in the community with three digits,” the statement read.

The capital administration said it would no longer educate the workers and would instead impose fines of $250 to $1,250 going forward, according to the statement.

Meanwhile, workers complained about the conditions at the testing facility, saying the Prek Pnov center lacked basic facilities. The workers detained there said the space was divided into narrow cubicles with cots, as well as dirty linen and bedding that was left outside the rooms.

Photos posted by the workers show them sleeping on mosquito nets outside the rooms at the quarantine center.

Lyheng, one of the workers, said health officials made them complete forms but would not say anything else or address their concerns with the conditions at the facility.