Nation Is Already United Without the Opposition, Ruling Party Says 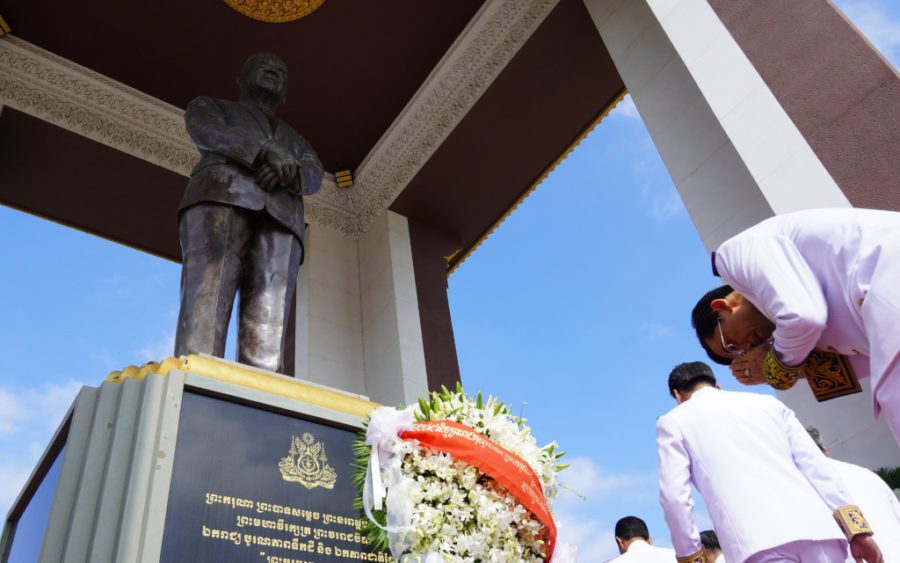 A statue of late King Norodom Sihanouk in Phnom Penh, in 2019. (Tran Techseng/VOD)

In celebrating the 67th anniversary of Cambodia’s independence from France on Monday, civil society, analysts and government officials reflected on “national unity” — though their views were sharply divided on whether the former main opposition CNRP should be included in such unity.

The premier praised Sihanouk for his strength in demanding freedom from French colonialism, extolling how the former king “sacrificed his energy and [used] intellect with the utmost zeal” to “demand real independence” for the nation.

Sokha, meanwhile, called out those who bicker and insult each other in the political area, though he did not name names.

“I think that in order to protect national independence, we must maintain strong national unity,” he said on Facebook. “[We] maintain strong unity only by reducing personal ambitions, not taking revenge, turning to tolerance, capturing conversations, abandoning insults, stopping [the pursuit of] conflicts that don’t fade.”

Sokha’s co-founder for the CNRP, exiled politician Sam Rainsy, has consistently traded taunts and insults with Hun Sen during his long periods abroad.

Sokha was arrested in 2017 over treason charges he denies, leading to the dissolution of the country’s main opposition party two months later. Some 118 senior party members were banned from politics for five years, and more than 5,000 local councilors were stripped of their positions. Sokha’s trial finally began earlier this year, but has been suspended for more than eight months due to the Covid-19 pandemic.

Former members of the party continue to be arrested and summoned to court.

Political analyst Meas Nee recalled that ahead of Cambodia’s independence, conflict among politicians was jeopardizing the country’s efforts to gain sovereignty.

Politicians today should take a cue from the past and open up dialogue across party divides in order to create national unity, rather than fighting each other, he said. It’s not too late for them to start, he said.

“Democracy is competing with each other but not taking revenge upon each other,” Nee said.

Chak Sopheap, director of the Cambodian Center for Human Rights, described the nation as “in political crisis,” saying that she does not believe national unity currently exists.

“I think that as a solution for our Cambodia, there should be a national dialogue to ease the political heat, within which the ruling party and the opposition party can work together and look forward for a solution.”

Am Sam Ath, spokesperson for the human rights group Licadho, urged politicians to take the lead by standing on their own independent principles.

Putting “the benefit of the nation and people first, [they] should find space for negotiation and conversations in order to find national unity,” he said.

Analyst Em Sovannara observed that the ruling party and CNRP only negotiate when pressured by foreign democratic governments. This year, the E.U. partially suspended trade benefits over rights concerns, including the dissolution of the CNRP.

Without such pressure, “it is hard for the opposition party’s politicians to survive or participate in the future political stage,” he said.

However, party and government officials said there was plenty of national unity already, as long as the CNRP was excluded.

CPP spokesperson Sok Eysan called the CNRP a “ghost” party that the Supreme Court deemed illegal three years ago. The ruling party won all 125 seats in the National Assembly in the subsequent 2018 election.

“Currently, Cambodia has no political crisis and those who have a crisis are the opposition politicians,” he said.

Phay Siphan, the government spokesperson, delivered the same message, and instead blamed the CNRP for destroying the culture of dialogue. He added that more than 20 political parties participated in the last election, though none of those minor parties received more than 6 percent of the vote.

“Only the dissolved party has a crisis and only those who are intent on that party [returning] have a crisis,” Siphan said. “We don’t have a political crisis. Please give justice to everyone. If we give justice to the CNRP, and we do not give justice to other parties, what do we think?”