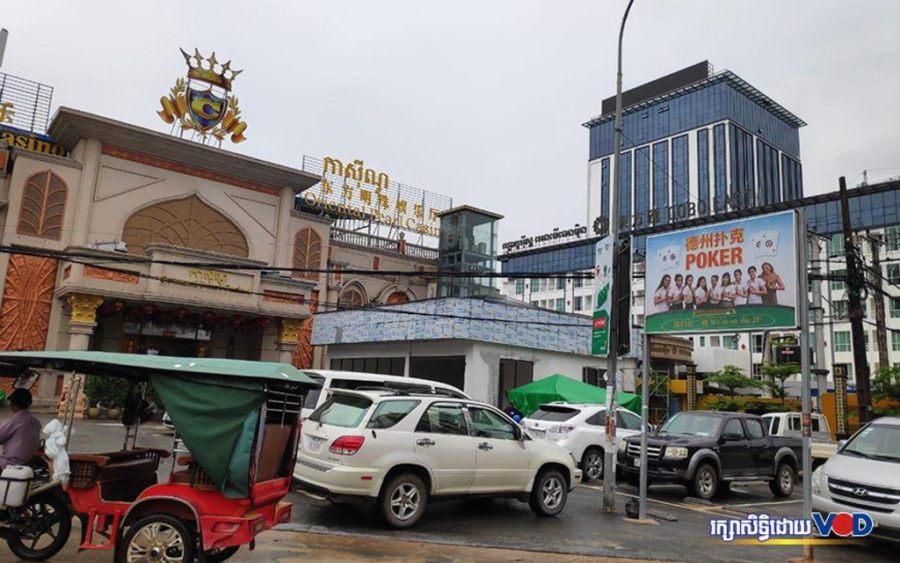 A casino in Sihanoukville (Vann Vichar/VOD)

Nearly 8,000 Cambodian staff working in casinos in Preah Sihanouk province have lost their jobs after the government ordered the shutdown of online gambling by the end of this year, according to a provincial official.

Yov Khemara, provincial director of the Ministry of Labor, told VOD that four casinos shut down all their operations, while another 23 casinos ended the employment of all staff except security guards, and 33 other casinos temporarily suspended staff. He said a total of 73 casinos were operating in the province.

The official said that a total of about 7,700 Cambodian staff members had lost their jobs.

On August 18, the government issued an order to close all online gambling in the country, claiming that foreign criminals had engaged in extortion.

Khemara said that 70 to 80 percent of the 30,000 Chinese people living and working in Preah Sihanouk province had already left Cambodia since the announcement of the ban.

He added that in 2019, the provincial labor department received 105 collective and individual litigation cases, one of them concerning a casino owner who had fled after shutting operations.

Preah Sihanouk provincial spokesman Kheang Phearum said that provincial authorities were inspecting casinos to make sure all online gambling in the province was ended by the beginning of the new year.

“Sihanoukville’s economic potential is not just about online casinos. As everyone knows, the potential in Preah Sihanouk is that we have a deep-water seaport, we have five special economic zones which are operating, and four others are being prepared for operation, and we also have factories and enterprises,” he said. “We have hundreds of factories and we have beaches, islands, which give opportunities for the province.”

Cheap Sotheary, coordinator of rights organization Adhoc in Preah Sihanouk, said the ban would also have a ripple effect on other businesses, such as landlords who rent out apartments and businessmen who rent out cars. “If we allow companies to invest in Cambodia … let’s have investment in something that provides knowledge and skills to local people,” she said.

Ros Phirun, director-general of the Ministry of Economic and Finance, said that the Cambodian government had issued 218 licenses for casinos in 2019, of which more than 100 were for online gambling.

He said that the casino industry had generated a total income of about $80 million per year.

“There are also some side effects [of the ban] … If we are closing one [casino], it definitely causes a loss. We have not yet estimated the costs because so far, some businessmen, based on my observation, are trying to increase their offline businesses. So, we have not estimated whether the ban might cause a loss or not,” Phirun said.