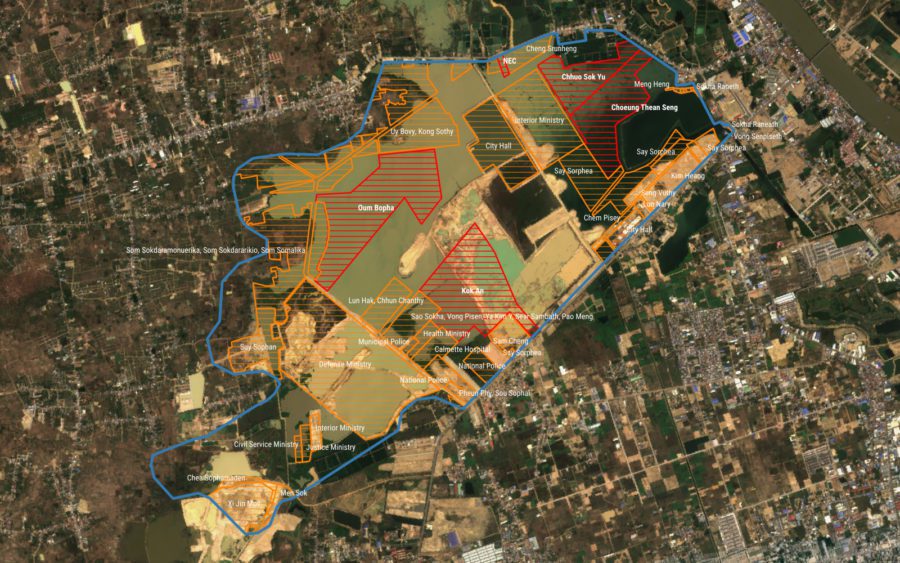 Plots given to individuals and institutions on Phnom Penh’s Boeng Tamok lake, according to sub-decrees and data from NGOs Licadho and STT.

The government continued its land privatization drive by allocating more than 400 hectares of Phnom Penh’s Boeng Tamok to private businesspeople and the National Election Committee, leaving little of the lake.

Six sub-decrees from November and December, released this week, reveal that around 425 hectares were given to five individuals and the NEC:

The land grants, combined with previous allotments, reveal that little of the lake is remaining, despite government assurances that a section of the lake will be maintained. With much of the lake allocated, a map of the area also reveals some civic planning with clearly demarcated streets and roundabouts.

According to coordinates provided in the decrees, An’s 155 hectares overlaps with a previous allocation to the Health Ministry. The sub-decree for An’s plot stated that a previous land allocation was voided.

The decree did not say if the land was sold by the ministry to An, but the interior and justice ministries have previously indicated they would be selling land given to them at Boeng Tamok to fund office renovations at their existing locations in central Phnom Penh.

Government spokesperson Phay Siphan said one of the reasons for the new allocations could be that people who farmed the land in the lake area had sold their land to private buyers, who were now trying to formalize the privatization. Another reason was ministries selling their land allotments to fund their activities, he said.

He said there was no wrongdoing in giving the land to influential government officials and businesspersons, and that the allocations were being done transparently and without creating chaos.

“They can accuse us like this but they have to know the kind of conditions that led them to receive land,” he said.

Businessman An could not be reached for comment on Thursday.

NEC secretary-general Som Sorida confirmed the election body had been given 3 hectares.

He did not know what would happen with its current building, located right next to the NagaWorld 2 casino, but said the new location was safe and big enough to house the offices and warehouses needed to complete all the work of the NEC, especially during elections.

Correction: An earlier version of this article, and previous media reporting, said Choeung Theang Seng was Choeung Sopheap’s brother. However, according to NGO Global Witness, Theang Seng is Sopheap’s son.