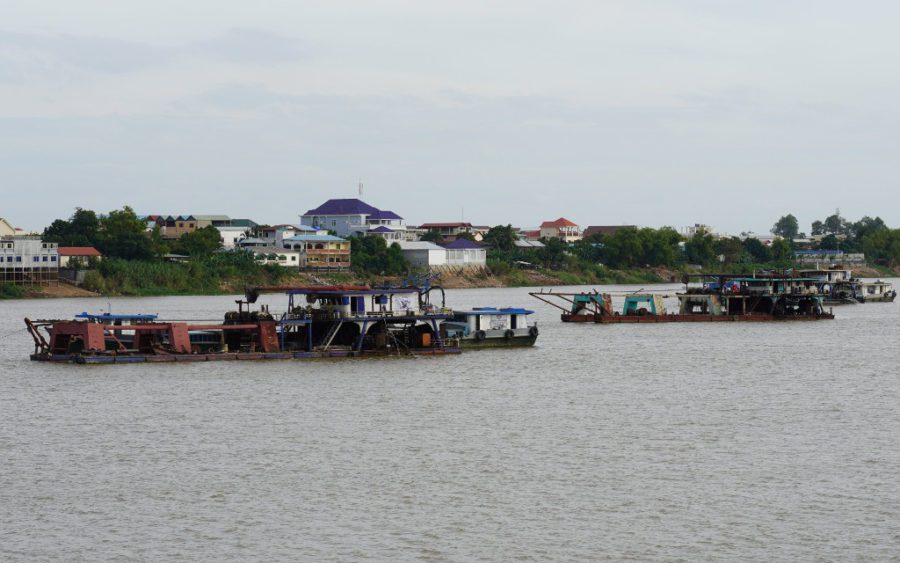 A new sand dredging operation has commenced on the Tonle Bassac river in Phnom Penh within the past month, a local official said, with more than 90 companies now dredging rivers and streams in the country, according to the Mines and Energy Ministry.

An environmentalist, however, raised concerns about over-extraction as well as the impact of using the sand for extensive landfilling of lakes and other bodies of water for development.

On the Tonle Bassac in Meanchey district’s Chak Angre Krom commune, three to four sand-dredging platforms can be seen filling up barges with river sand.

Yeav said he hoped the operators would use proper techniques, noting that there have been riverbank collapses in other areas.

In February, several residents in Kandal lost their homes due to riverbank collapse on the Tonle Bassac.

“If they follow proper techniques, there won’t be a problem,” Yeav said.

Chhin Touch, 67, a resident of Tuol Roka, has a house and farmland along the riverbank. The machines dredging sand have been outside her home for about a week, Touch said.

She said no one has told her what is happening, or consulted her about any potential impact. Her farmland is right on the bank, so she fears it could erode.

“We just ask that they don’t dredge too much. We can’t stop them. They must dredge,” Touch said.

Choub Chamroeun, 63, another village resident, said she had seen sand-dredging machines nearby but also had received no information.

“[We’re] just afraid. Our house is on the riverbank. [We’re] afraid of the land collapsing,” she said.

Mines and Energy Ministry spokesperson Yos Mony Rath said the Tonle Bassac dredging was not part of the 90 licensed operations under the ministry — it was instead a local “restoration” project handled by City Hall.

In terms of bigger dredging projects, a new operator, Chaktomuk Resources Supply last month began work based on a license to dredge 800 hectares in four zones on the Tonle Bassac and Mekong, Mony Rath said.

He said residents were consulted before dredging started, the river bottoms had been studied for potential impact, and the company had to follow strict requirements not to dig too deep or dredge outside prescribed boundaries. Government officers would inspect once or twice a month, Mony Rath said.

He added that the sand would be sold for domestic landfill first, and exported if there was excess supply.

“There’s no limitation for exporting to any country — any market that is acceptable, they can export there,” Mony Rath said.

Chaktomuk Resources Supply director Vicheth Reasey confirmed the license but said she was busy and could not comment.

City Hall spokesperson Met Measpheakdey did not respond to questions.

The group had concerns about social and environmental impacts due to the filling in of lakes as well as the health of rivers and their fisheries due to over-extraction of sand, he said.

Gonzalez-Davidson said the government should release more evidence to support their claims that sand dredging is not damaging.

“In Cambodia, there are no limitations to sand dredging, no clear research, no published reports on environmental and social impacts. Local people cannot comment or advocate, and the government does not care what civil society and activists say,” he said. “As human rights and environmental activists, we are very worried.”