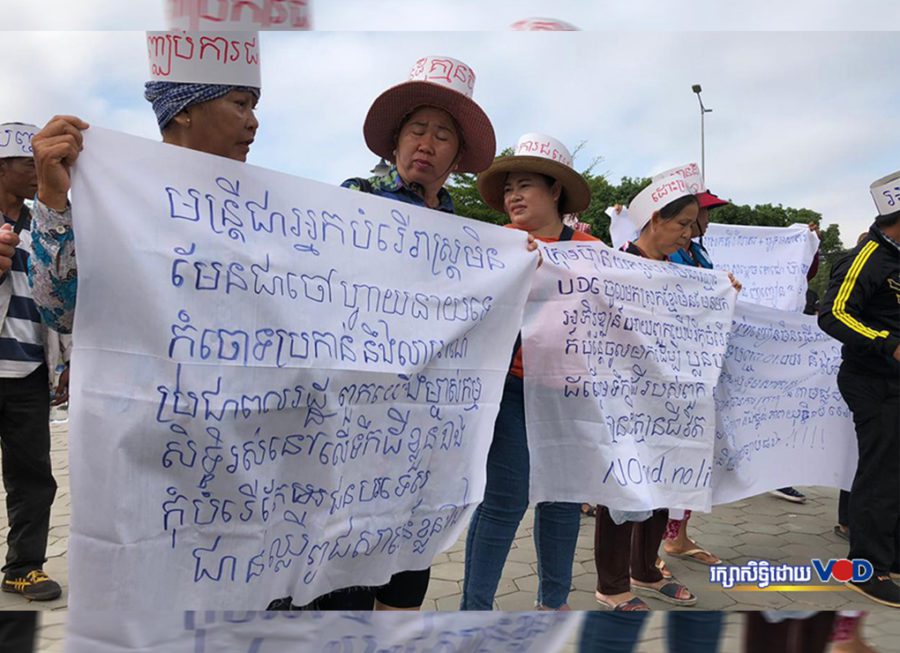 Civil society organizations have appealed to the government to stop the use of violence against women human rights defenders.

Ahead of International Women’s Day on March 8, 12 civil society organizations submitted a petition to the government seeking solutions to seven key issues.

Among these seven points raised, civil society organizations asked for an end to violence against women activists. Women have been at the forefront of many prominent protests over land dispossession in recent years—including the long-running disputes in Phnom Penh’s Borei Keila and Boeng Kak neighborhoods—and have frequently clashed with security forces.

“The government should urge for strict law enforcement, in compliance with principles of universal human rights and the promotion of fundamental rights and freedoms including rights to expression, rights to assembly, right to unionize, right to participation and right to association without harassment, surveillance and interference from competent authorities or officials,” the petition said.

It added that the courts were also being used to stifle the activities of women human rights defenders.

Coalition of Cambodian Farmers secretary general Keo Chanra, who joined in the petition, said violence, threats and legal pressure were hindering women from fighting for justice.

“For some land activists, their families are always reminding them about [the risks to] their personal safety,” Chanra said.

As leaders in their communities, the women faced pressure to set a strong example and stand up to the threats, she added.

“It doesn’t just affect them, and their families, but it also affects the participation of other members of their communities,” she said.

Women’s Affairs Ministry spokeswoman Man Chenda said the ministry had seen the civil society organizations’ petition, and would discuss solutions to the issues with other ministries, stakeholders and civil society.

“I’ve already printed out that letter for the minister. She said she would look into it,” she said.

“I just found it on the internet,” she added. “I don’t how they sent the petition…but I saw it on internet and I printed out for her.”

Some of the issues raised were already being addressed by the ministry, she said.

The petition also called for solutions to sexual violence against women at the workplace, stronger protections against human trafficking and modern slavery, safety shelters for women suffering from domestic violence, community preschools and workplace daycare centers, and reforming the transportation system for textile, clothing and footwear factory workers.