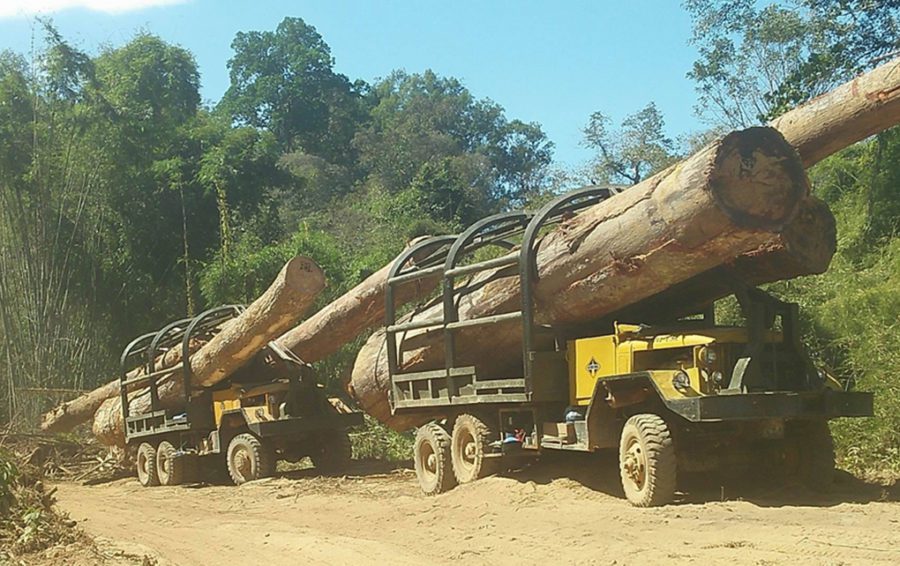 “It has created a level of comfort, what we call ‘riding a horse without holding the reins,’” said Seng Sokheng, secretariat coordinator of the Community Peace Building Network.

“Timber traders and related officials are close to the ruling party. … They can do whatever they want.”

Despite the ruling party’s recent pledges to stamp out corruption and pay more attention to the protection of Cambodia’s natural resources, the NGO officers said they had little confidence in seeing a turnaround.

Adhoc community empowerment officer Pen Bonnar said he needed to see powerful timber traders prosecuted as proof the government had the will to change.

“The most important reform is legal punishments against oknha, to set an example that the law was not made to punish only the weak, and not just to be used against the other group. It needs to be equally applied,” Bonnar said.

Political analyst Ly Srey Sros added that it would be more difficult for a government under one-party rule to take responsibility for its actions.

In January 2016, Prime Minister Hun Sen formed a national taskforce to stamp out illegal logging. It announced 57 prosecutions and the confiscation of 70,000 cubic meters of illegal wood within three months, but three years later there has been no update on the cases or any examples of top traders being prosecuted.

Eng Hy, spokesman for the military police — which also leads the national anti-timber trafficking taskforce — responded that NGO officers and political analysts had the right to speak their mind, but in this case their comments were ignorant.

“Their mouths cannot be shut because our country is a multiparty democratic country. They have the right to expression,” Hy said. But “sometimes they express themselves without even knowing what is right and what is wrong.”

The taskforce was a governmental, administrative body — not a political or partisan one — so it did not matter which parties National Assembly lawmakers represented, he said.

“The national committee was created by the government so it has nothing to do with a single party or two parties,” Hy said. “We have subsequently worked effectively. Since it was created, we have cracked down on, and stopped, many — though there are still some loopholes.”

Hy added, moreover, that checks and balances existed between the various levels of government even without a robust opposition party. “If the provincial level can’t do it, the national level will do it,” he said.

When asked, however, for an update on the taskforce’s prosecutions of illegal timber traders, Hy would only say that the taskforce tracked the numbers internally, but they weren’t summarized in a presentable form.

Complaints about ongoing illegal logging, Hy added, were based on false assumptions.

“People see wood being transported and call it all illegal,” he said. In fact, most truckloads of timber were legitimate, he said.

“How could the national committee crack down on them if they have a proper letter?”

Though public documentation is scarce, it has been reported that a directive from Hun Sen banned all exports of unsawn logs, as well as the export of sawn wood to Vietnam, in 2016. However, Vietnamese import records obtained by forestry campaigners have shown millions of dollars worth of wood continuing to cross the border from Cambodia into Vietnam.