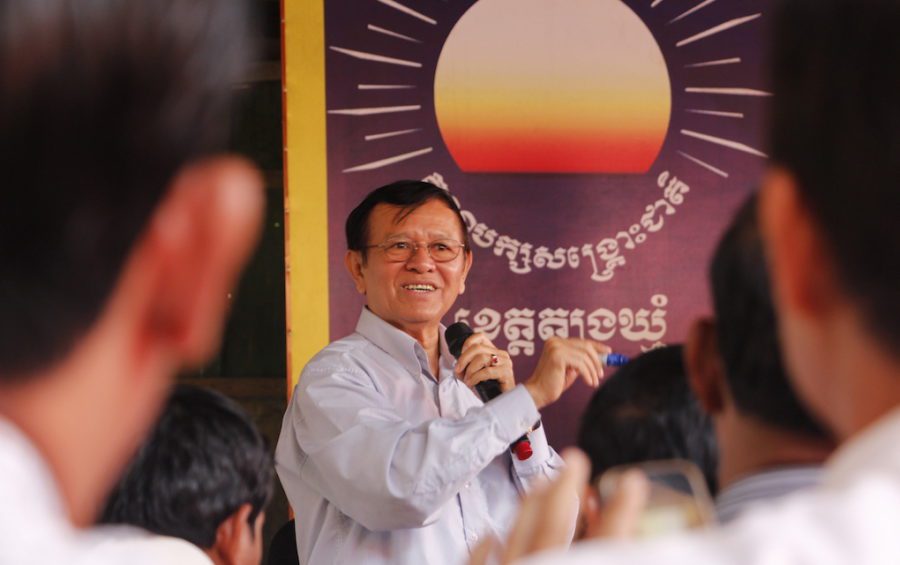 A lawyer for opposition leader Kem Sokha on Wednesday said no foreigner had been questioned during the more than two-year court investigation into allegations that Sokha conspired with a foreign power against the government.

Lawyers for Sokha, who was arrested in September 2017 and accused of attempting to overthrow the government with U.S. support, on Tuesday appealed a decision by the Phnom Penh Municipal Court to bring his case to trial.

Sokha and the U.S. have denied the charges. The court on Monday said the case would be brought to trial, but a trial hearing date has not been announced.

Defense attorney Chan Chen told VOD that after a 27-month investigation period, Investigating Judge Ky Rithy has not identified which foreigner was the relevant party in his client’s case, prompting an appeal from the defense team against the lower court’s decision to bring the case to trial.

“Previously, authorities filed the case against my client, alleging that there is a conspiracy with foreigners, but so far, we have seen that the investigating judge has not questioned any foreigner,” Chen said.

Sokha was charged with conspiracy with a foreign power, defined in the Criminal Code as the “act of having secret agreement with a foreign state or its agents, with a view to fomenting hostilities or acts of aggression against the Kingdom of Cambodia.”

If convicted, Sokha faces 15 to 30 years in prison.

His party, the main opposition CNRP, was dissolved by the Supreme Court in 2017, two months after Sokha was arrested. The following year, Prime Minister Hun Sen’s ruling party swept parliamentary elections, winning all 125 National Assembly seats on offer in a poll marked by the absence of the CNRP.

The Phnom Penh court closed the investigation into Sokha’s case last month. He had been jailed for about a year after his arrest, and was released on bail last year and held under de facto house arrest until November 10. He is still not allowed to leave the country or participate in political activities.

On Monday, the court said it had enough evidence to bring the case to trial.

Sokha’s lawyers on Tuesday appealed that decision, stating in a letter to the court that their client was not satisfied with the judge’s decision to try his case and keep him under court supervision.

Defense lawyers have requested that Sokha’s charges be dropped, arguing that the judge did not fully investigate all possibly involved parties in accordance with legal procedures, and had a duty to investigate the guilt or innocence of the accused before issuing a closing order to send the case to trial.

In a letter to the court dated November 18, the lawyers requested Sokha be acquitted.

“After more than two years of investigation, there is no evidence showing that there is a foreigner, even one, who was involved with or conspired with our client,” they wrote. “Therefore, any doubt [in favor of our client’s innocence] should benefit the accused.”

Appeal Court spokesman Touch Tharith on Wednesday told VOD that he had not received the appeal request from the defense lawyers, while Judge Ky Rithy could not be reached for comment.

“It is the court’s procedure and it is going forward. The investigating judge closed the investigation and found that there are grounds to charge and issue the order to send the case to trial,” Malin said.

“The next procedure of the court is to issue an order setting the date for trial and summon the related parties to attend the hearing. If they are not satisfied with the procedure, they can appeal to the Appeal Court and the Appeal Court will decide whether their appeal has enough grounds based on the law or not,” he added.

“Since this is a political matter and it’s not a legal matter, we cannot make a good prediction” of the outcome, he said.