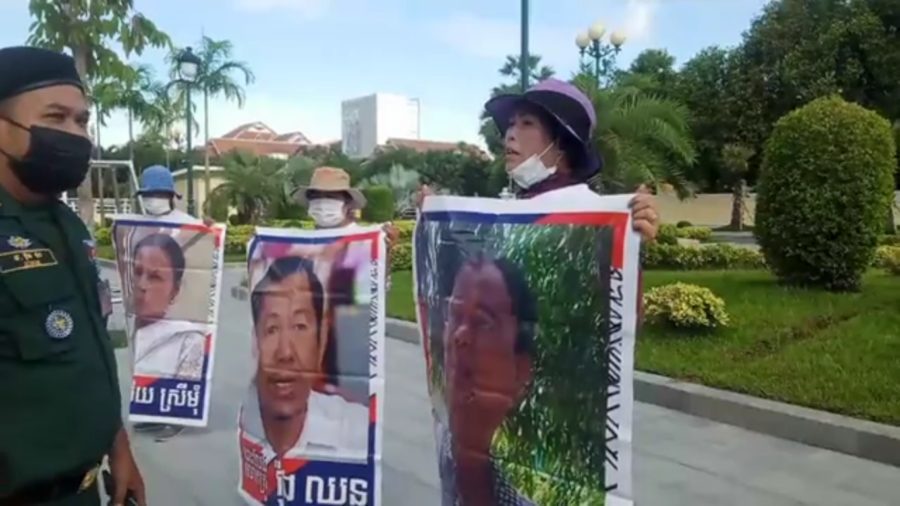 Protesters outside the US Embassy on May 28, 2021 call for the release of political prisoners amid a Covid-19 outbreak in the country’s prisons, in a screenshot from a video supplied by protesters’ families.

Through prison guards and unnamed NGOs, the wives and brother of three jailed dissidents have been told their imprisoned relatives have Covid-19, amid outbreaks in at least four of the nation’s prisons, the extent of which has not been revealed by the government.

The U.N.’s office in Cambodia said it did not have “specific information” about how many people have tested positive in the country’s “dangerously overcrowded” prisons.

The office also called for “greater transparency to ensure that information concerning the outbreak in prisons is made available similar to other COVID-19 positive cases,” according to a statement.

Government officials have confirmed positive cases in four of the country’s prisons beginning with 34 infections in Preah Sihanouk provincial prison earlier this month, followed by the news last week of 18 cases in Phnom Penh’s Prey Sar prison and an unspecified number in PJ prison.

Kandal deputy provincial governor Nov Peng Chandara said on Friday that there were more than 100 infections recently recorded in the provincial prison.

The nation has about 40,000 prisoners across the country.

The U.N. statement issued on Friday suggested it was not being told the full picture of the outbreaks.

“The United Nations system in Cambodia does not have specific information on the number of positive cases in prisons in Cambodia and calls on greater transparency to ensure that information concerning the outbreak in prisons is made available similar to other COVID-19 positive cases,” the statement said. The World Health Organization is part of the U.N. system, and has been a part of Cambodia’s Covid-19 response.

Srey Chey Vy, the wife of jailed opposition CNRP activist Ton Nimol, said she had heard from a prison guard on Thursday that her husband tested positive for Covid-19, and was separated from other prisoners.

“This information must be valid because he works there,” Chey Vy said.

But others have been left in a state of confusion.

Sam Nath, the brother of Khmer Student Intelligent League Association activist Mean Prom Mony, said he had heard from unnamed NGOs that his brother had Covid-19, but a prison officer had denied it.

“The information is different, so I’m not clear about it myself, and feel suspicious. I’m concerned about it,” he said.

She said she has been trying to contact officers in the prison, but no one has picked up.

“Prison officers should have contacted my family, not the family having to contact them. He is a prisoner who has not killed any person — he just helped other people and raised his voice.”

“I feel regret that the prison has shut down [communications] and allowed Covid-19 to spread through the whole prison. I feel upset with their recklessness. I don’t care whether prison officials want to hide information or not. I request that prison officials allow contact with family and relatives — when they fell sick, they closed off and haven’t allowed family and wives to know about their well-being.”

All three prisoners — Nimol, Prom Mony and Sophorn — are in Phnom Penh’s Prey Sar Correctional Center I, where 18 cases were revealed in a letter last week. The prison asked Phnom Penh courts to suspend court hearings to avoid the potential transmission of Covid-19.

Outbreaks have also been confirmed in the provincial prisons of Preah Sihanouk and Kandal, as well as Phnom Penh’s PJ prison.

Kandal’s deputy governor Nov Peng Chandara told VOD on Friday that the province’s Covid-19 case numbers, which have not been released daily, had fluctuated recently, but the outbreak at the provincial prison had seen numbers rise this week.

“Within these last two days, [the number of cases] in prison has increased to more than 100,” Peng Chandara said, estimating about 150 or 160 patients in total.

They were being treated at the prison, he added.

“According to an investigation, it is related to a prison doctor who was infected with Covid-19,” the deputy governor said.

Maggie Eno, co-founder and director of Sihanoukville-based social services NGO M’Lop Tapang, which provides reintegration programs to inmates in Preah Sihanouk provincial prison, said her staff had not been allowed to enter the prison since February 24 due to Covid-19.

“Since the recent outbreak we have not been able to enter or communicate with prisoners so it is hard to know the real situation since [the] Covid outbreak,” Eno said in an email.

Prisoners have told the NGO in the past that overcrowding and hygiene were their main concerns, as it was difficult to social distance and wash your hands frequently, she said.

“During Covid, the prison separated the new intake of prisoners from the existing prisoners to try and minimise risk of transmission from outside of the prison,” she added.

This week, authorities refused to confirm the PJ prison outbreak for days, and have yet to disclose current case numbers in any of the four prisons. A family member of a PJ prison inmate said on Wednesday that her daughter was told there were more than 300 cases there.

Municipal and provincial authorities have deferred to the Interior Ministry’s prisons department for figures. Department spokesperson Nuth Savna could not be reached on Friday.

After a delayed response this week, the U.N. on Friday disclosed that it too did not have details on the prison cases — raising questions about whether the Health Ministry’s daily announcement of new cases is complete, or excludes the prison cases and potential others.

Health Ministry technical department director Hok Kim Cheng, however, said on Friday that the ministry’s total included all cases in the country.

“This is the total figure,” he repeated. Asked about the U.N. not having information, he said the international agency was working directly with the prisons.

The PPE aid came following a request from the prisons department to the U.N. on May 13 for vitamins, Chinese traditional anti-flu medicine and rapid antigen test kits for detecting Covid-19 for 10,000 prisoners, as well as masks, gloves, face shields and other personal protective equipment for prison officials, according to the U.N. statement.

It was procuring most of the requested items on the prisons department’s list, the statement said.

The U.N. also said the exceptional challenges posed to the prison system by Covid-19 required equally exceptional measures to “ensure that the health and rights of all of those held in Cambodia’s dangerously overcrowded prisons are protected.”

“In the context of the current COVID-19 outbreak, the authorities need to take urgent steps to minimize the threat posed by the virus to those in detention including by releasing to alternate facilities, a wide range of categories of prisoners, namely pre-trial detainees, women with accompanying children, those with pre-existing medical conditions and non-violent offenders.”

Earlier this month, more than 140 female detainees in Preah Sihanouk were moved to the Kampot Provincial Prison to create more space. The U.N. human rights office said this week that the Preah Sihanouk Provincial Court had also released more than 100 prisoners after Covid-19 cases were reported in the province’s prison, adding that the measure used to reduce overcrowding “should be scaled up and broadened across the country as a matter of urgency.”

A U.N. Secretary-General report from last year said the U.N.’s human rights office in Cambodia “consistently found that conditions of detention generally fell short of international standards, including with regard to detainees’ access to health care and medical treatment, sanitation, and visits from family members and legal representatives.”

The report said the U.N. encouraged the government to introduce alternatives to detention as a means to reduce prison overcrowding, work to lessen the use of long pretrial detention and delayed release after sentence completion, and review a ban on pardons and sentence reductions for drug offenders.

Naly Pilorge, of local rights group Licadho, echoed those calls, which she said had been made for years, as well as urged the government to be more transparent about the number of cases in prison.

“There are many political prisoners or other people imprisoned because of their defense of human rights, environmental activism, etc. There are also vulnerable groups, like pregnant women, children, the elderly, and people with disabilities,” she said in a message. “They should not be put at extreme risk of getting COVID-19, a disease that requires multi-level action to address, starting with prevention, transparency and equal access to healthcare for everyone, especially for prisoners under the state’s care.”

“The crisis in prisons is an entirely avoidable disaster,” Pilorge added.

Cambodia has seen a surge of cases since February, with over 25,000 cases recorded in just the past two months.

On Friday morning, seven family members of jailed dissidents also protested outside the U.S. Embassy in Phnom Penh, calling for support in securing their release.

“We want to release all political prisoners because the Covid-19 condition is heavily spreading in the prison, and a few of our activists have already been infected. We are their children and wives who are concerned about them,” Madola said, adding that she considered her father innocent.

The main opposition CNRP was dissolved by the Supreme Court in 2017, and continuing support for the outlawed party has been met with dozens of court cases and arrests.

On Friday, about 30 officers came to drive away the seven protesters before they could submit a petition to the embassy, she added.

“They look down on us and accuse us of rebelling and causing chaos,” Madola said.