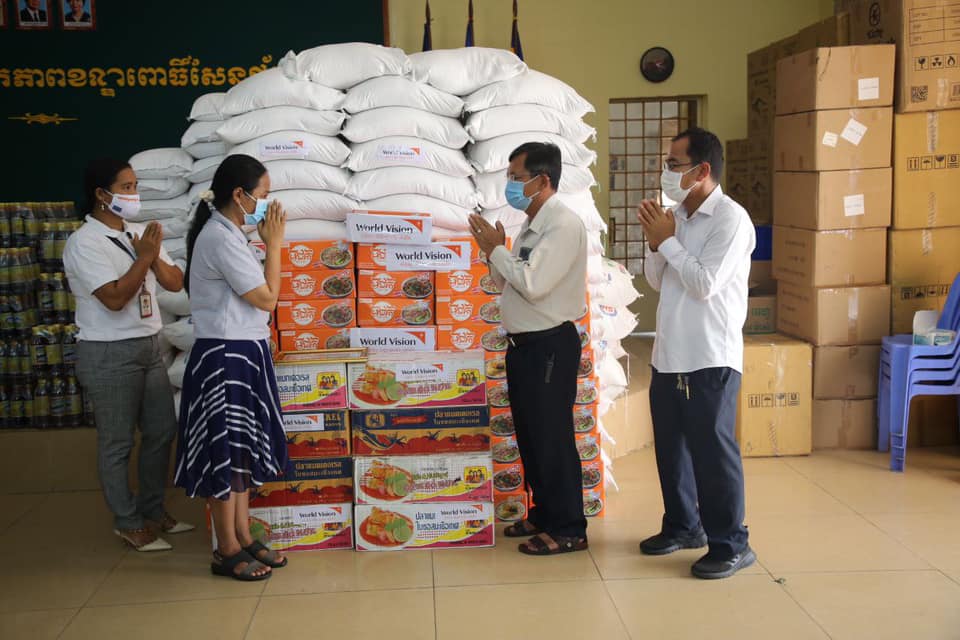 Representatives from the NGO World Vision donate Mee Chiet instant noodles and other food to the Pur Senchey district office for distribution in a photo posted to the district’s Facebook page on May 14, 2021.

Choeung Sokuntheavy, the tycoon overseeing Vital water and Mee Chiet noodles, gained the title of “neak oknha” earlier this year, a step up from the unembellished “oknha” title that has attracted controversy this year.

Sokuntheavy is the daughter of Choeung Sopheap, the Pheapimex tycoon who was granted 315,000 hectares of land in 2000 and is also vice president of the Cambodian Red Cross.

Sokuntheavy is chair of the NVC Corporation, which sells Vital water — the chosen product sold by the Commerce Ministry in Covid-19 red-zones this year. Her Mee Chiet noodles were also on sale by the ministry. Prime minister’s daughter Hun Mana was formerly a director in NVC.

The “neak oknha” title was granted in a January royal decree recently obtained by reporters.

Sokuntheavy is also the wife of Lao Vann — a military general who is the son of CPP senator Lao Meng Khin. Meng Khin and Sopheap have married, making Sokuntheavy and Vann step-siblings as well as spouses.

The royal decree says Sokuntheavy was earlier made “oknha” in November 2009. It adds that Vann was also an oknha before giving up his title in September 2019 as a two-star military general.

Her parents, Sopheap and Meng Khin, are also oknha, both gaining the title in 2006.

Other neak oknha tycoons include Kith Meng, chair of the Royal Group.

The number of oknha has ballooned in recent years. According to the Cambodia Daily, they numbered around 20 in 2004 and more than 700 in 2014, and, according to Radio Free Asia, at least 1,000 as of this year.

The rise in number has been associated with occasional trouble and rising criticism, including oknha Doung Chhay’s alleged domestic abuse caught on video and oknha Heng Sier accused of attempted rape, both earlier this year.