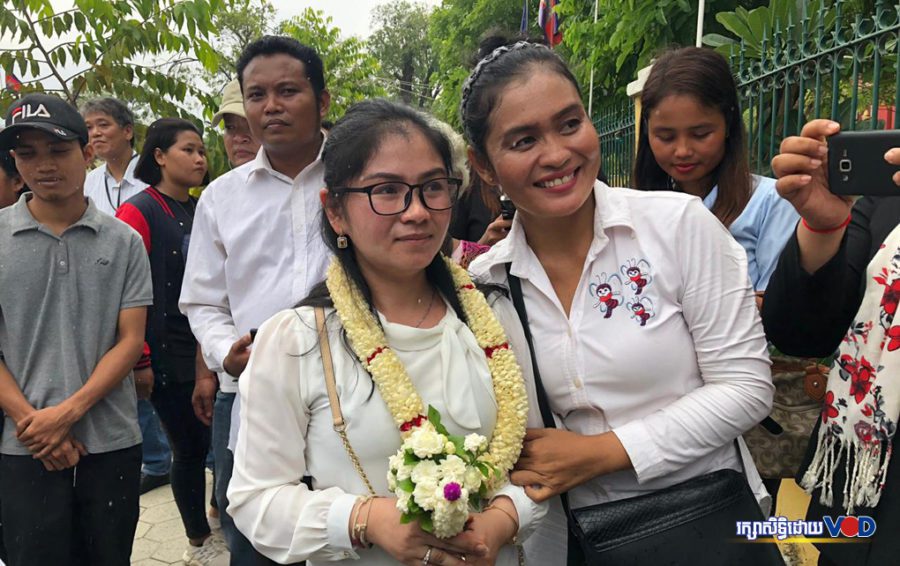 Sin Chanpeou Rozeth leaves the Battambang Provincial Court after being questioned on May 9. (Pich Chamrong/VOD)

Six more former opposition officials were to be questioned at the Battambang Provincial Court on Thursday as those leaving the interrogations maintained they have the right to num banh chok.

Police blocked roads around the court as questioning continued for a second day against 26 former members of the Cambodia National Rescue Party (CNRP) in the province. Some observers have likened the sudden and largely unexplained summonses to “intimidation.”

Former commune chief turned restaurateur Sin Chanpeou Rozeth, the proprietor of the Khmer-noodle eatery at the center of prosecutors’ questions, entered the courthouse during the morning. She is accused of exercising her political rights without permission.

The Supreme Court dissolved the CNRP in November 2017, nine months ahead of a national election, and banned 118 of its top officials from participating in politics for five years.

The grassroots party members summoned to court in Battambang were not part of the 118-member blacklist.

Sam Vong Dara, former second deputy chief of the city’s O’Mal commune, gave his testimony on Wednesday and said afterward that he was asked about a gathering at Rozeth’s place in December.

The gathering — which he said was unplanned — was posted as a live video stream to Facebook. Deputy prosecutor Keu Bunnara told him that the video could be considered incitement and a violation of the Supreme Court verdict.

“I think the gathering was a normal thing because everyone has the right to gather,” Vong Dara said. “I think there was nothing against the law.”

Saing Bun Mao, first deputy chief of Svay Por commune, said the focus of the gathering had been coffee and num banh chok.

“At that time, [Rozeth] had opened her new restaurant. I always went to have coffee and eat num banh chok at that place,” Bun Mao said.

“The court asked, was it incitement — was it inciting members of the public to follow and serve the CNRP?” he said.

“I said I had no intention to incite anyone. I said I am a person. I have the right to expression.”

Defense lawyer Sam Sokong, who was present during the interrogations, said on Wednesday that the case seemed to stem from a provincial police report.

“I observed the representative of the prosecution questioning the [accused] based on a report from provincial police headquarters, in relation to disrespecting the Supreme Court verdict and in relation to the gathering in Battambang province,” Sokong said.

Human Rights Watch, however, condemned the summonses as “absurd.”