‘Not a Big Deal’: Six Released After Alleged Sale of Vaccination Cards 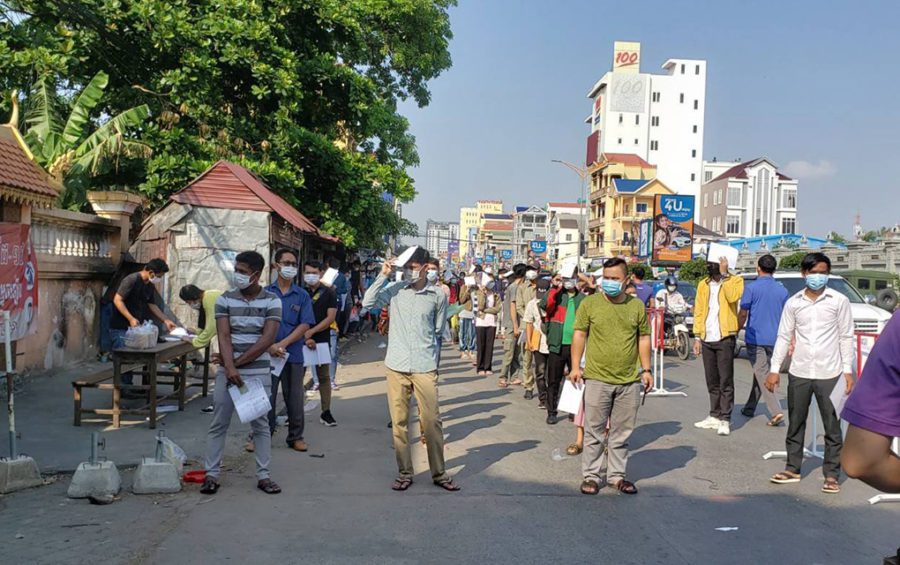 Preah Sihanouk police arrested and released six people accused of selling vaccination cards, though neither police nor the provincial administration would give any details of the accused individuals, including whether they could be local officials.

Provincial administration spokesman Kheang Phearum said the six people were arrested on Friday over allegedly buying and selling vaccination cards as well as application forms for registering for vaccines.

On Monday, he referred a question about whether the six were officials, doctors or citizens to police and the provincial court.

Phearum earlier said on Friday that he could not give details about those arrested while the investigation was ongoing.

The province started its public vaccination campaign on June 22, with a target of 200,000 people vaccinated. The vaccinations are free of charge, Phearum said.

Provincial police chief Chuon Narin said on Monday that the six people had been released after confessing and signing contracts that they would stop selling the vaccine cards.

“We didn’t impose any punishment because [we are] the same Khmer. It is not a big deal. It is just that they have short-term thinking. We have educated them to stop doing this,” Narin said. He hung up when asked who the six were.

Yong Kim Eng, president of NGO the People’s Center for Development and Peace, said the incident was corruption, and should be penalized.

“There are sellers of vaccination cards, there are payments for taking tests … [they] must be severely punished so it will not happen again. It sets a bad example,” Kim Eng said.

Any corruption in the Covid-19 response was a detriment to public health, he added.

“The Covid-19 disease is still rampant, and there are people taking advantage of it by committing corrupt acts. It will have a devastating effect and will pose a higher risk for society, and the vaccination [campaign] will not be able to achieve its goals,” he said.

The Health Ministry has previously warned of brokers taking money in relation to the public vaccination campaign, and asked that local authorities take action against perpetrators.

The number of first doses given out countrywide has hit almost 4 million out of its ultimate goal of 10 million people vaccinated, but Covid-19 cases have seen another recent uptick, with 883 new cases announced on Monday. That is the highest since June 4, and the seven-day total has reached 5,086, the highest since May 5.

In a separate case, 39 people earlier this month complained of being asked to pay 60,000 riel, or about $15, each for Covid-19 testing at a public district hospital in Kandal province’s Ang Snuol district. Authorities intervened to return their money, but no action has been announced against the doctors who took the money.