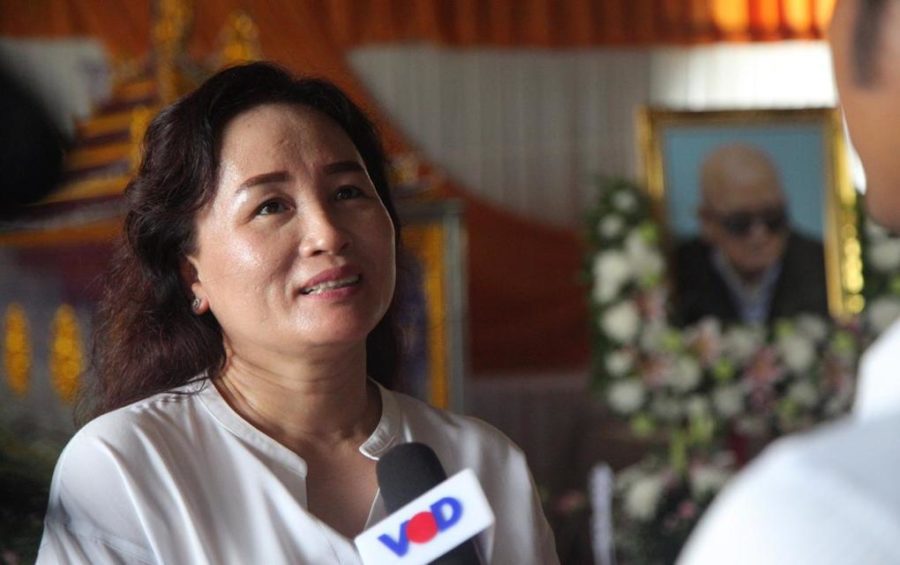 Lao Chea Linda speaks to a reporter at the funeral of her father, Nuon Chea, in Pailin province on August 6, 2019. (VOD/Chorn Chanren)

The daughter and friends of former senior Khmer Rouge leader Nuon Chea said her father’s last wish was to see people in Cambodia join together in solidarity.

Nuon Chea, known as “Brother No. 2” of the Democratic Kampuchea regime, died aged 93 at the Khmer-Soviet Friendship Hospital in Phnom Penh on Sunday. His body was taken to a pagoda in Pailin province by his family for a traditional funeral.

At the pagoda, Lao Chea Linda, Chea’s 52-year-old third daughter, said her father had wished to see his children and Khmer people unite, do good deeds and love one another.

“He told his children to help the disadvantaged, to have the heart to help people who are more disadvantaged than us,” she recalled. “He asked us to take care of our health, study hard and unite together.”

Chea was the one who had initiated the building of the pagoda, and he had asked for a traditional funeral when he died and for a message of loving the land and one another to be shared.

“When I communicated with him in 2000 or so, he always talked about national issues, not much about politics,” Chan Somay said. “When I was listening to him, he always instructed us to strive to protect our land as he was always worried about this society.”

Chea’s body was kept at Prom Kiri Morokot pagoda for one night and two days for relatives to pay their last condolences, but few others turned out to the ceremony.

Some of the visitors were former Khmer Rouge subordinates living in Pailin, but they did not stay long. Most merely lit incense sticks, gave money and left. They did not say much, especially to journalists.

Chea’s family said his body would be kept at the pagoda before being cremated at 7 p.m. on Friday.

Political analyst Em Sovannara said a message of respect and love was noble, but that was hardly the example set by Khmer Rouge leaders.

“Instructing people to love and unite with one another for the Cambodian people is a good message for any leader, but the Khmer Rouge regime did not encourage the spirit of loving each other,” Sovannara said.

What the Khmer Rouge had spread instead was “the spirit of distrust, seeking vengeance, doubting and reporting on each other — the so-called Eyes of the Pineapple,” he said.

Chea was arrested on September 19, 2007 and twice convicted in the Khmer Rouge Tribunal, first in 2014 for crimes against humanity, and second in 2018 for the genocide of ethnic Vietnamese and Cham Muslims.

(Translated by Kang Sothear from the original article on VOD Khmer)