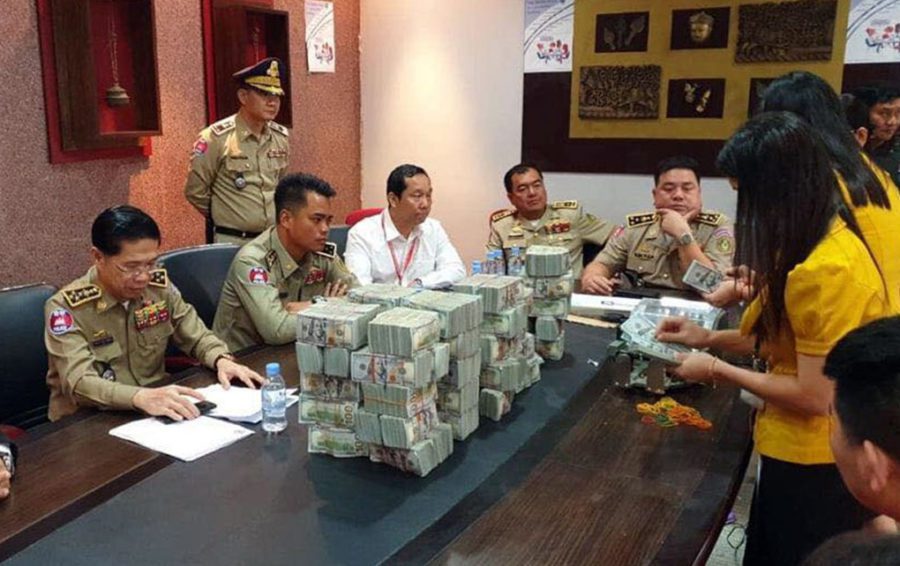 Nine suspects arrested for illegally bringing $7 million in cash into Cambodia said they won the money gambling in Macau and were stashing it in the Cambodian property market, immigration department director-general Keat Chantharith told reporters.

Chantharith, however, said he suspected the smuggling of cash was part of an organized operation rather than individual actions.

The important takeaway from their confessions, he said, was that the destination of the illegal cash inflows was Cambodian real estate.

“They answered the same as each other that they invested the money on land and property in our country,” he said to gathered reporters after a meeting at the Interior Ministry on Wednesday.

Officials were still investigating the exact source of the smuggled money, he added.

“If the money has no clear source, it will be a crime of money laundering.”

The nine suspects were comprised of seven Chinese nationals and two South Koreans. Two of the Chinese suspects arrested at Siem Reap Airport admitted the money was to be eventually transferred to other people, Chantharith said.

Cambodia’s property boom has long been suspected of being stoked by wealthy Chinese nationals seeking to move their money out of their tightly controlled economy by laundering it through the highly dollarized and loosely regulated Cambodian economy.

Vorn Chanthorn, vice president of the Cambodian Valuers and Estate Agents Association, said his association did not make a habit of looking deeply into the source of investors’ money.

However, Chinese investors were clearly the primary drivers behind booming land purchases, particularly around Preah Sihanouk province, he said.

Last week, Interior Minister Sar Kheng said the ministry was working with Hong Kong authorities to crack down on suspected money laundering through Cambodia. He has previously advocated for stronger policing against money laundering in order to protect the country’s international standing.

According to the Basel Anti-Money Laundering Index, Cambodia was rated as having the seventh worst risk for money laundering in the world out of 129 countries measured.