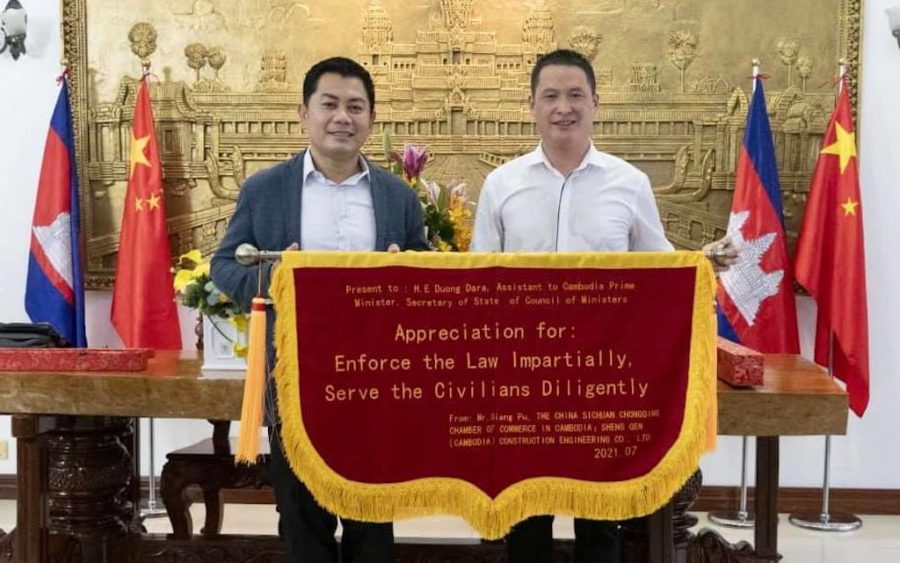 Duong Dara, left, receives a ‘flag of appreciation’ from a chamber of commerce, in a photo posted to his Facebook page in August 2021.

Duong Dara admonishes a reporter when asked about his recent statement about officials reporting false information to Prime Minister Hun Sen on land disputes in their areas.

“Some questions that you’ve raised, I’ve looked into them and some seem like even though a fire isn’t burning yet, your questions as posed will light the issue on fire,” Dara tells VOD. “I want to know you deeply, whether brother truly wants to help society or not.”

“I welcome the intelligent person and the good, conscientious journalist,” he adds.

Dara, an adviser to Hun Sen, has become a fix-it man for people’s grievances across the country, especially over land.

He stepped in when Preah Sihanouk residents faced eviction from lake land given to the family of Senator Ly Yong Phat, showing them the potential resettlement site. He has also mediated after investors lost millions in GoldFX, a financial firm involving the family of Interior Minister Sar Kheng.

Dara has also courted some controversy amid Covid-19, when his visit to coastal provinces to look into land disputes ended up temporarily shuttering some schools as a health precaution. He was found to be a contact of a visiting Hungarian diplomat who did not quarantine upon arrival and tested positive for Covid-19 immediately after leaving the country.

His Facebook page contains a string of interventions for families, businesspeople and others embroiled in disputes all over the country.

On Thursday, Dara posted online that when people ask Hun Sen to provide justice, “I will try to coordinate and resolve for you.”

“I would like to thank the officials, authorities and experts who have worked together to solve the problem for the people so that samdech does not have a headache,” he wrote.

He continued, however, by suggesting that Hun Sen was not receiving accurate information from his officials.

“Together, we will stop making false reports to samdech, in order to solve the problem for the people as soon as possible,” he said.

On Friday, Dara reiterated the concern. He says he won’t give specifics, or he would not be able to maintain good communications with those officials. But he elaborates that many disputes are being falsely reported as already resolved.

“According to each of the cases that I have received, the majority of cases have had false reports written about them, which impacts the decisions and judgement in providing land titles for people,” Dara said.

In official documents, it can appear that the dispute is solved, “but the problem still continues there,” he said. “That has caused problems till now — some people for 10 years, 15 years, 20 years.”

False information gets in the way of resolving people’s problems, he added. “That’s what I have seen in the past, like in Poipet, so I released the message recently that we must jointly stop making false reports … to quickly find a true solution for the people.”

“Through these work experiences, I have seen these false reports that obstruct the resolution of land disputes, so I would like to request some officials who falsify reports, and make wrong reports and lie to change them, to make correct reports so that we jointly and truly solve and end the problem for people.”

Historically, land disputes are said to have affected as many as 770,000 Cambodians since 2000, the International Federation for Human Rights has said, especially as economic land concessions granted to companies and individuals overlapped with people’s existing farmland.

Lin Sarin, Ream commune chief in Preah Sihanouk province’s Prey Nob district, said Dara in the past year has worked to have villagers accept a compromise at Boeng Thom Angkep. Six-hundred hectares, including the lake, was allocated to Ly Arporn and Seng Nhak, the daughter and son-in-law of CPP Senator and businessman Ly Yong Phat.

“The majority of people have agreed,” Sarin said. “His Excellency Duong Dara came to compromise with the villagers and bring them to see the new site. For some people who came to live on the land without a house, the company gave money.”

Villagers told VOD last year that they thought their livelihoods would suffer in the new location. “We cannot complain — we’re just people,” one said. “I do not dare to speak out. We just want peace, and now it’s not very peaceful.”

“I do not dare to make an evaluation because he is too high,” Sarin said. “How he has solved the land issues, I do not dare to speak about because I will make a mistake.”

In Kampot province, administrative chief Vith Vathana said he knows of at least one case Dara has resolved.

“Sometimes he comes without alerting us. He has solved the land issue of an American man. … What I know is he solved it for the foreigner, who was cheated over land. For other cases I do not know.”

Preah Sihanouk provincial spokesperson Kheang Phearum denied there have been any falsified reports about land disputes.

Khieu Sopheak, spokesperson for the Interior Ministry, said aspersions should not be cast on all officials.

“When he raises the whole forest, it is difficult for me to answer, and there are good officials too. Yes, there are some officials who have lied,” Sopheak says. “The most important thing is who are the ones and where, and it will be easy for me to [take action].”

There are more than a thousand commune-, 200 district- and 25 province-level administrations in the country, he added.

“It’s OK, we have our leader just as he does,” Sopheak said of Hun Sen, asking Dara to be specific. “It is like if we are sick and we go to the hospital but do not know what sickness. … Please tell the doctor clearly whether it’s your ear that is sore. … We welcome true information from Mr. Dara.”

On August 31, Dara posted online that a Chinese investor had spent $3 million in a Cambodian investment, but had yet to receive his land title as agreed with an official.

“As for the reason, we still do not know for sure … maybe the officer is working … or there is no land for sale,” Dara wrote without details. “Unable to wait any longer, he decided to apply for intervention to samdech techo to help provide justice.”

“I personally am very sorry for this case. Let the Chinese investors have confidence in the Royal Government of Cambodia led by Samdech Techo Hun Sen. I will try my best to find a solution in accordance with the laws of the country.”

On September 6, he posted that two land dispute victims had died while waiting for a resolution.

“They lived in misery both mentally and physically.” Dara wrote that their children had told him: “Please, brother, his excellency, hurry up and solve this for us. The old victims are gone, or are we to wait until we are all dead?”

“I’m not angry with you, I understand how you feel,” Dara wrote. “However, I still believe that those who create problems should be involved in solving them soon so that you can get rid of these chronic problems.”

On Friday, he told VOD that he is trying to tackle problems as the last resort for many people.

“I am not in charge of a national authority to solve land issues, and I am not the Ministry of Land Management or the court — so the cases that I receive from people are ones where they have no other option. In the end, they put their confidence in samdech and see him as their last hope. … I check on those cases and whether we can solve anything.”