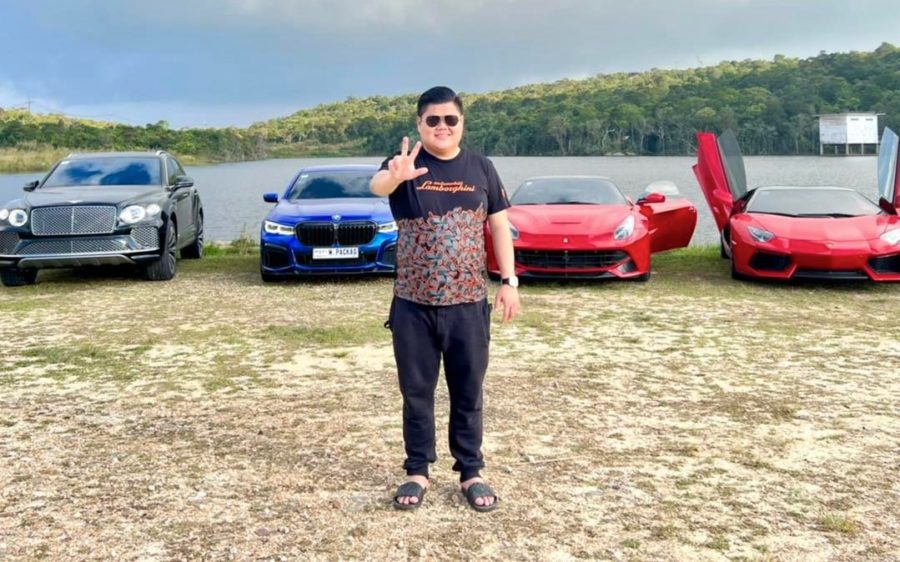 Duong Chhay in a photo posted to his Facebook page on February 9, 2022.

A tycoon who made headlines last year for assaulting his wife railed online against his now-jailed father — meanwhile spraying accusations of injustice against the country’s courts, leading to his own expulsion from a ruling party committee.

Duong Chhay is the son of Interior Ministry general Duong Ngeap, who was jailed this week following a Facebook rant about corrupt courts. Ngeap said in online videos that he had run out of money from repeated court visits, acknowledging an adultery case against him but denying fraud.

The son, Chhay, was last year caught on footage dragging and attacking his wife in their home.

In his own Facebook video that Chhay posted this week — but has since been deleted — the son detailed his father’s affair with a woman and alleged financial improprieties that resulted.

The father built a villa for the woman on the family company’s land, and had his nephew marry the lover to take assets from the company, Chhay alleged.

Senior ruling-party officials mediated in the dispute, and Chhay and his mother filed a lawsuit, he said.

But the courts ruled in favor of the lover, allowing the woman to keep the villa, he said, criticizing then-Appeal Court president You Bunleng for taking the wrong side.

“My mother was shocked — he was the president of the Appeal Court and a law expert and he used the words ‘wife of Ngeap’” about the lover, Chhay said.

“Many leaders and people have had extramarital relationships, they have experienced this, but they’ve ended the issue. Why didn’t my dad end the issue, instead giving the house [to her]?” he said, claiming that powerful people’s affairs often started at golf courses.

Chhay said the dispute had left him and his mother impoverished and crying every day, and he bemoaned that his mother did not have her own villa.

Still, as the family’s eldest son, he would try to help get his father out of jail, he said.

“He is lost and confused,” Chhay said.

Chhay then moved to railing against his own ex-wife, saying the footage of violence against her had been a “trap” in order to take all his property in their divorce. His then-wife had called him home when he was drunk and insulted him, Chhay said, and complained that his ex-wife already had a new man to protect her.

Chhay followed up his expulsion by posting an apology video.

Bunleng, the criticized court official who is now vice president of the Supreme Court, laughed on Friday when asked about Chhay, saying the tycoon had always had a penchant for stirring up trouble online.

“I don’t have time to answer this, because in this case he came and bowed and begged me to help find a compromise between his parents, and I told him that when it came to Facebook, if you want to live peacefully with each other, you should not go public. Once you publicize it, it causes problems,” Bunleng said.

The court case about the villa had led to an injunction, but the courts could not kick out the woman from the house, he said. “It would violate her rights,” Bunleng said. “We complied with the law.”

CPP spokesman Sok Eysan said he did not know the details about Chhay’s case, but those who participate in the party’s working groups need to be able to build trust with the public and earn votes.

“When there is not a good background, the party has the right to remove and transfer,” Eysan said. “When an issue occurs that impacts the spirit of the people, the head of the working group discusses whether to transfer or remove or change to prevent bad impacts on the party.”