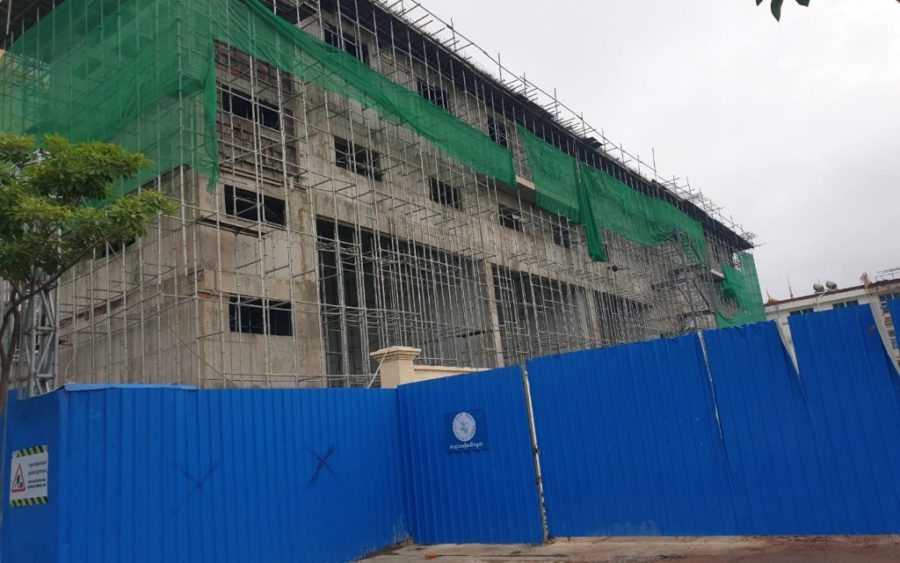 A new electricity substation on the grounds of the Olympic Stadium in Phnom Penh, in October 2020. (Mech Dara/VOD)

Another new building is rising on Olympic Stadium grounds with the government handing over a corner to the country’s electricity supplier — and joggers and others who use the public space say the historic grounds are becoming hemmed in with new constructions and increasingly unpleasant for exercise.

An electrical substation is under construction on the stadium’s east side, based on a years-old request by the Ministry of Education, Youth and Sport. The project is part of Japanese aid agency Jica’s work to expand electricity transmission and distribution, according to government documents.

Soy Bora, 18, said she found it harder to train at the stadium because of the construction and car parking. The space was getting crowded, with a football team that trains in the morning moving into the lot she previously used, she said.

She was forced to move her workout onto the stadium’s walking platform, stairways and field inside the stadium itself.

The tall buildings now surrounding the grounds, as well as ongoing construction, make it harder to catch her breath after a run, she said.

“It is stuffy because the high buildings are blocking the sun,” she said. “In the past when we came to exercise, we felt fresh but now it is stuffy.”

Construction work on the substation and the Chinese-owned condominium development Sky Villa spills onto the two-lane track running outside the stadium, with workers and debris encroaching on some stretches. The track is also used by both exercisers and cars driving to parking spots.

Security guards blocked off the northern half of the track on at least one morning late last month.

Kim Mai Eng, 56, an orange juice vendor who sells near the stadium, was carrying a bag of five bottles around to groups of older people during their dance workouts, seeking thirsty customers. She said she used to have a stand inside the stadium, but officials completely banned vendors from selling snacks and drinks inside the complex.

It’s not like “the old days” when the stadium was free of developments, Mai Eng said, adding that exercisers have been complaining because they’re losing space for running due to the parking and construction. She fears that the dancers — who come at dawn and dusk to perform group workouts and Tai Chi — will soon be driven out too.

“They told us that they want to do like other countries [do] and they will close everything, even the dancing areas,” she said. “They want us to go to the gym, and we do not know what to do so we will wait and see how it is in the future. It is very difficult these days.”

According to a letter signed by Education Minister Hang Chuon Naron in October 2013, the ministry transferred a 60-by-26-meter piece of land to Electricite du Cambodge so that Jica could build a substation, as part of an approximately $134 million aid package to support three development projects that Prime Minister Hun Sen signed that December with the former Japanese premier Shinzo Abe.

When asked about complaints related to shrinking public spaces and rising constructions, Siphan said the buildings added to the cityscape.

“The landscape of the city is these skyscrapers,” he said. “We want to meet the public demands that are the priority. It cannot satisfy every person.”

Vath Chamroeun, secretary-general of the National Olympic Committee acknowledged the constructions, but did not respond to questions about how this would affect athletes and citizens using the stadium, referring questions to the Education Ministry.

Ann Thida, associate director of real estate agency CBRE Cambodia, said the land surrounding the stadium had grown in value — now worth up to $4,500 per square meter — due to the central location and the long-term leases that the government offered developers on state land. The area is also becoming crowded with developments, driving the demand up, she said.

“If an investor wants to buy to live there, they should buy it now because later it could be difficult to get it,” she said.

According to CBRE listings, a shophouse in the Overseas Cambodia Investment Corporation’s Olympia City development sells for $700,000, while Sky Villa properties, part of Chinese-owned MCC Land, start at $707,200.

Hun Sokagna, a senior guide for Khmer Architecture Tours, said the Olympic Stadium was an important monument in the city, noting that it was designed by renowned architect Vann Molyvann in order to host the 1963 Southeast Asia Games, which were canceled due to the political situation at the time.

She’s noticed that the construction has taken its toll on the stadium, that the drilling and cranes “make it shake, so I notice around the stadium it’s cracked in more places.”

The guide grew up around the stadium, and she has watched as developers filled the system of moats inside the complex as part of the city’s beleaguered drainage system.

Now that construction of the 85-hectare Morodok Techo National Sports Complex is underway, Panha fears the Olympic Stadium is being dismantled, bit by bit.

“I worry that they will build the new stadium for the future, and they will stop using this stadium for hosting events, so I worry that one day they will destroy it,” she said. “I have no idea [what their plans are], but I really worry about it because they’ve destroyed it indirectly by building the buildings.”