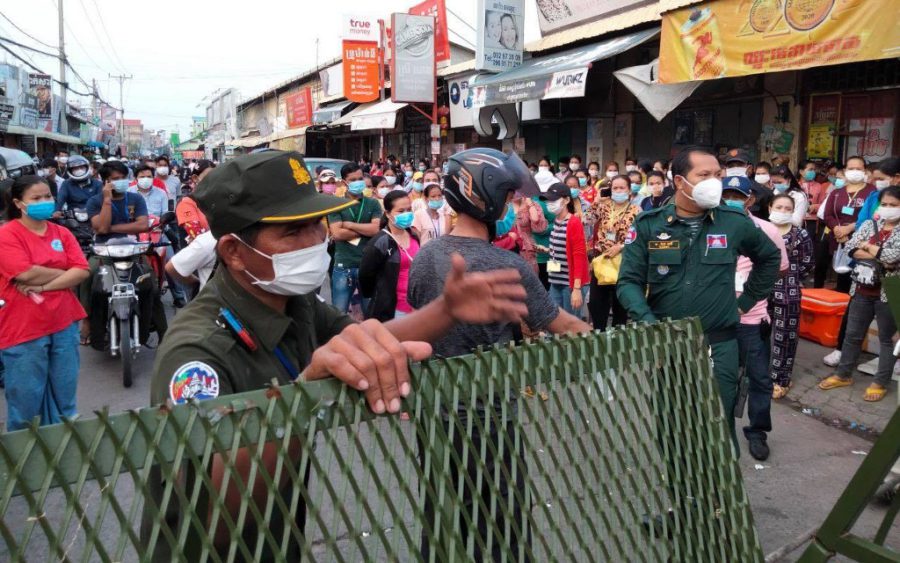 Protesters face police officers at a red-zone barrier in Meanchey district’s Stung Meanchey III commune on May 13, 2021, in a photo posted to the commune police’s Facebook page.

Poor residents of Phnom Penh, Kandal’s Takhmao city and Sihanoukville have another week to apply for emergency cash aid to alleviate the impacts of Covid-19 lockdowns, the Planning Ministry has announced.

The ministry said 61,678 families had so far been selected for the program and could begin withdrawing money as of Thursday. Assistance ranged from 156,000 to 311,000 Riel, or about $39 to $78, based on interviews and evaluations by staff, it said.

The families must not already be receiving the national IDPoor aid or have garment workers in their households, who are separately receiving assistance from the Labor Ministry. The lockdown-assistance program’s estimated cost is $4 million.

Theng Panhathorn, from the ministry’s planning department, said at a press conference on Thursday that families were evaluated based on the conditions of their housing and livelihoods.

The deadline for applications is June 17, he said.

“We would like to inform [you] in advance about that, and please quickly contact [local officials]. If it isn’t [on time], it is not the fault of the authorities or the fault of our team that went down to do this work. It is the fault of our own people themselves,” Panhathorn said.

“I don’t think there are any complicated issues, because the lockdown areas are small,” Soth said.

The program began receiving applicants on May 13, and a staff of about 1,000 has been working to interview families.

Amid a record surge in Covid-19 cases in April, cash-strapped residents of Phnom Penh’s lockdown protested, saying they had lost their incomes, were banned from going out to buy food, and were going hungry. Markets were closed citywide, and in the most restrictive “red zones,” the Commerce Ministry was designated to take over all sales of food — though according to a survey by NGOs, few red-zone residents were aware of the ministry’s distribution channels.