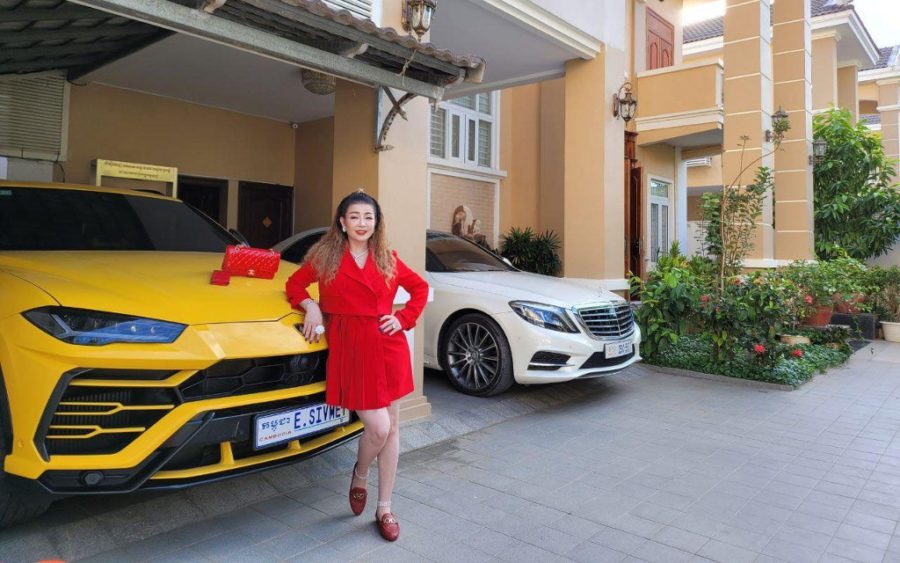 Ean Sivmey poses with a Lamborghini Urus parked at her Phnom Penh house, in a photo she posted to her business’s Facebook page on November 26, 2020.

An online cosmetics tycoon who poses with a Lamborghini and boasts of lavish donations to the state has been served a court summons for defamation amid complaints of insulting people in her livestreams.

Ean Sivmey’s “Siv Mey Online Shop,” which has nearly half a million followers on Facebook, has gone silent since police surrounded her borey home in Pur Senchey district’s Choam Chao I commune on Tuesday.

Lim Vuthy, an assistant to the commune chief, said officers from the Interior Ministry as well as the district had gone to serve the summons against her to testify in a defamation case. She was not home, but Vuthy said authorities would take stricter measures against her if she fails to appear in court.

A Phnom Penh Municipal Court spokesperson could not be reached on Friday.

Sivmey has posted online about a defamation complaint against her, saying she was sued by Meas Sovannratana, a product distributor for rival cosmetics tycoon and self-proclaimed “celebrity” and “humanitarian” Try Dana.

Though there were few details for that case, Dana complained in an open letter in August signed by her lawyers that Sivmey had accused her of trying to copy her brand.

“Despite the oknha title, the words are cheap,” the letter says. “Such an oknha is called a ‘used’ oknha.”

The title is given to businesspeople who make sizable donations to the state.

During live Facebook streams, Sivmey allegedly insulted people for having “dog’s brains,” mocked them over the deaths of their parents, and taunted a woman over the death of her first husband, according to the letter and clips posted online by Sinath.

In a video reply, Sivmey is unapologetic, and questions why Sinath shares her bad words and not her good ones.

Sivmey posts regular videos to market cosmetic products — under the brand name Ei Ei — on Facebook, including some featuring staff who sell her wares across the country.

In August, she revealed a $50,000 donation to the Kandal province Red Cross, raising her donated total to $90,000. She said the number represented her September 9 birthday. She received the oknha title in a sub-decree signed by Hun Sen the same month.

The prime minister’s wife, Bun Rany, has led the Cambodian Red Cross since 1998 and has faced scrutiny for alleged politicization of humanitarian aid.

In July, Sivmey donated $20,000 to build a traffic light on National Road 8 in Kandal, according to her page. She also donated $5,000 for Covid-19 prevention efforts, and received a thank you letter from Hun Sen.

Interior Ministry spokesperson Khieu Sopheak, criminal investigations department director Ngeng Chuo and Phnom Penh Municipal Police spokesperson San Sokseyha said this week they had no information on the case or were too busy to comment.

Staff who picked up the phone for Sivmey’s shop said they knew nothing about where their boss was or how to contact her. She could not be reached through a phone number listed on Commerce Ministry records.