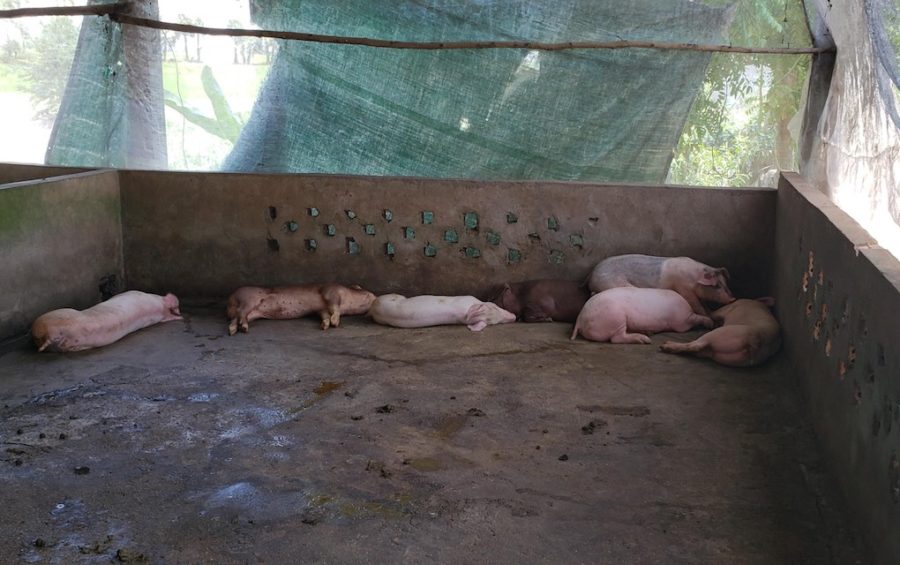 About two weeks passed before Long decided to contact the Agriculture Ministry, which soon after began sending officials to inspect pig farms in Kandal province. By then, Long’s 30 pigs were all dead.

Kandal is the fifth and latest province to be hit by African swine fever (ASF), which has killed about 3,600 pigs in Cambodia as of this week, after having first been reported in Ratanakiri province in late March.

Officials have touted the government’s efforts to contain outbreaks, but accounts from pig raisers in Kandal and warnings from health experts suggest the disease may have outpaced official reports, raising concerns about the speed and transparency of farmers’ and government responses to an aggressive virus that is almost always deadly for swine.

Even though ASF has no direct effect on humans’ health, the disease merits a stronger response from the region’s human health authorities and organizations because of its impact on food supply and livelihoods, said Dirk Pfeiffer, a professor of veterinary medicine at City University of Hong Kong.

“We’re lucky that this disease doesn’t kill people, but at the same time it’s a disadvantage, because the authorities don’t take it as seriously,” Pfeiffer said. “It’s a problem for livelihoods.”

Another expert, Sara E. Davies, said Cambodian health officials told her while she was  researching her book on human health crisis response throughout Southeast Asia that they could not report a public health concern without getting approval from a range of officials above them, or risk penalties, like losing their jobs.

“The concern is you could lose crucial response time while the politics is sorted out,” said Davies, author of “Containing Contagion: The Politics of Disease Outbreaks in Southeast Asia.”

As of this week, ASF has claimed at least 3,604 pigs in Cambodia, including those that died of the virus and those culled by authorities in an effort to stop the disease’s spread, according to the World Organisation for Animal Health (OIE).

A Series of Outbreaks

The virus has ravaged the pork industry in China since August 2018 and Vietnam since February, killing millions of pigs across Asia, including in South Korea, Mongolia, Laos and Hong Kong.

The virus was first reported in Cambodia in Ratanakiri province on March 22 and has now killed some 2,600 pigs there, according to OIE. Cambodia’s Agriculture Ministry reported this initial outbreak as resolved on May 9, but subsequent outbreaks emerged in four provinces near the Vietnam border since June 23.

When asked in July about the spread of the disease, Tan Phannara, director-general of the Agriculture Ministry’s animal health and production department, said it had been contained in Ratanakiri by the authorities’ culling and disinfecting measures, but ASF spread through the four other affected provinces through Vietnam.

“Cambodia didn’t say that we can get rid of the disease yet, but we stopped the transmission,” he said.

The government banned the import of pigs from Vietnam and Thailand, and Phannara said the country increased control of animal sales across borders. However, he also noted in a press conference in July that a group of Cambodian soldiers had been allowing pigs to be smuggled across the border, though the pigs tested negative for the disease. After the discovery of the cross-border pig smuggling, the ministry launched an inquiry into officials who appeared connected, but no results of the investigation have been publicized.

Phannara told VOD that officials had control over the disease’s spread, but he suspected that it would remain in the country for a long time. He said authorities were now responding quickly to reports of pig deaths, adding that farmers reported a few deaths in Preah Sihanouk and Koh Kong provinces, but the pigs had tested negative for ASF.

An OIE representative said in an email that the organization independently researches rumors and unofficial reports of outbreaks as a way to improve response times, but the organization did not comment on whether any of the 13 reported ASF outbreaks in Cambodia were recorded via this process.

The U.N. Food and Agriculture Organization led educational seminars and response missions in Cambodia as early as April, but representatives did not answer questions about the disease’s spread and containment in the country.

According to OIE, ASF was reported in Tbong Khmum province on June 23 — nearly three months after it was first recorded in Ratanakiri — then was tracked in Svay Rieng on June 25 and Takeo by July 3.

The disease was first reported in Kandal’s Khsach Kandal district on July 4. But one resident of Sa’ang district’s Kraing Yov commune, farmer Yav Long, said ASF arrived in his area sooner than that. He noticed his pigs’ symptoms on June 24.

Kim Long said she noticed the symptoms when one of her family’s dogs brought a pig carcass into her farm’s pen to eat. She knew of ASF but in her 10 years of raising pigs had never contended with the disease, she said.

The farmer finally reported her pigs’ symptoms to commune officials on July 10. She only felt confident in doing so after she and her brother autopsied a pig and saw abnormalities in its veins.

According to OIE, signs of ASF may include hemorrhages in pigs’ skin, which results in redness of the ears, abdomen and legs, chronic skin ulcers and loss of weight.

In mid-July when VOD spoke with Kim Long, she was preparing to bring her surviving pigs, which appeared lethargic and immobile, to slaughter at the village’s makeshift burial near the pagoda. She had separated the healthy and sick pigs, and sprayed antibacterial and antifungal disinfectant around the pens, as recommended by visiting agriculture department officials.

“This one might be dead already,” she said, pointing to a pig lying on its side in the pen designated for sick pigs. When contacted by reporters about two weeks later, she said all 100 of her pigs had died.

Other local farmers with fewer pigs seemed not to know about ASF or how it spreads, as they had buried their deceased swine in their backyards, Kim Long said.

Because ASF spreads through a number of vectors — between pigs, and through feces, feed, trash and dirt — the disease spread aggressively through both small-scale and industrial farms in China and Vietnam, which have a much higher number of farms than Cambodia. Small-scale farms are particularly prone to ASF because the farmers don’t have the equipment or resources to thoroughly clean and cut off the disease, according to Pfeiffer, the veterinary medicine expert.

“The question is about biosecurity, cleanliness,” he said. “The reality is that small-scale farms will find that hard because [sanitation] costs money. This virus is taking advantage of that situation.”

Kim Long, for instance, doubted that she would have the finances to resume raising pigs, but even if she did, Pfeiffer said there would be a high risk that new pigs would be contaminated by her farm, or they could already carry the disease from hard-hit neighboring countries.

Doeup Sau, first deputy commune chief for Kraing Yov, said he was working with other officials to track the virus’ spread by mid-July. According to their count, ASF hit all 19 villages in the commune as of July 22, killing 961 pigs there.

Sau’s stated figures reveal a greater death toll than what has been reported by OIE, which issues regular updates based on national government reports.

OIE reported on July 8 that 164 pigs were susceptible to ASF and 95 died in Kraing Yov, while 59 were reported dead in Kompong Chamloang commune on July 4. The government reported no increase in the number of outbreaks in a report for the period of July 26 to August 1.

One outbreak in the country — in Kraing Yov — was reported as ongoing as of this week.

Agriculture officials have distributed informational posters explaining how the disease is transmitted, which were seen in the commune office and scattered among livestock feed on Kim Long’s property.

Sau attributed ASF’s spread to a lack of knowledge from commune residents, but he also admitted not knowing that the disease was spreading through China and Southeast Asia.

“People thought it was just normal,” he said. “Animals die during rainy season.”

While traces of the virus can last several months in processed meat and up to a few years in frozen carcasses, unfounded fears that it can be transmitted through the air or that humans could eventually contract the disease abounded in Kraing Yov commune.

This fear’s effect on the pork industry reflects a national trend: Cambodia Livestock Raisers Association president Pov Srun said pork prices dropped 25 percent in July, from 11,000 riel (about $2.75) per kilogram to about 8,200 riel (about $2).

In a recent speech, Prime Minister Hun Sen made a point of encouraging citizens to continue eating pork.

“ASF cannot affect human beings, don’t get worried too much. I also eat pork,” he said.

Before buying pigs, slaughterhouses need a letter of confirmation from a veterinarian that the pigs tested negative for the disease as well as others, as required by the government’s 2002 sub-decree on sanitary inspection of animals and animal products.

“It’s difficult, but we have to do it,” Srun said. “If we don’t, who would trust our product?”

Since the outbreak began, officials have required ASF blood tests for pigs as they reopen the trade in affected provinces. If five or six pigs out of 100 test negative for ASF, farmers can sell them all to a slaughterhouse, Srun said.

For Davies, the researcher, one of the key threats to Cambodia in a public health emergency is the lack of open information and communication about the spread of a disease. She noted that there is a fear the media can get information wrong, but argued that the benefits of sharing information about an outbreak, even if it’s not ideal for the government, outweighs the risk of spreading the disease.

“While you might have a very good process of detection and then verification and release of information, it sits within a wider context where civil society and media have been heavily controlled so then you lose trust,” Davies said.

Communication issues within Cambodia and between Southeast Asian nations can partially stem from countries’ reliance on international aid and donors, who inadvertently encourage Cambodia to report to them rather than among provinces and regional neighbors, she said.

Even if Cambodia’s understanding of reporting and implementation of the World Health Organization’s International Health Regulations has improved in recent years, Davies said it may not do much good during future outbreaks.

“If [regional officials] are not picking up the phone and telling each other what’s going on,” she said, “there’s literally a plague on both our houses.”