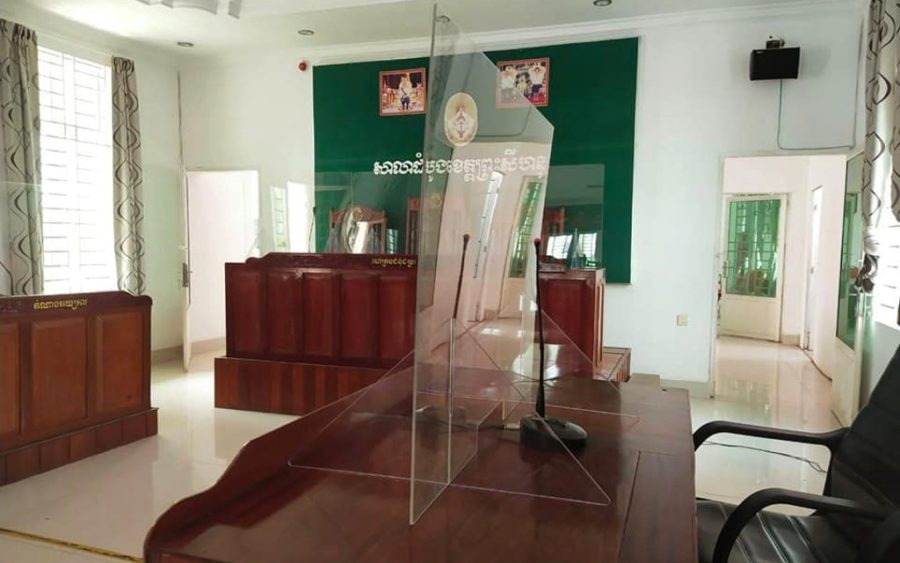 A courtroom equipped with transparent screen as Covid-19 precautions, in a photo posted to Justice Ministry official Kim Santepheap’s Facebook page on April 16, 2021.

Following hundreds of arrests, at least 102 people are facing court charges for Covid-19 violations, including more than a dozen put on trial without a lawyer after the accused chose to represent themselves in their misdemeanor cases, according to court officials.

At least nine people in five different provinces have already been sentenced to a year in prison for pandemic-related crimes, such as having drinking parties in violation of a ban on gatherings and alcohol. After the government passed the Covid-19 Law on March 11, Prime Minister Hun Sen urged severe punishments for violators amid a surge in coronavirus cases centered around Phnom Penh.

Preah Sihanouk Provincial Court deputy prosecutor Huot Vichet said on Tuesday that his court had dealt with four cases related to violations of Covid-19 measures, including an accused already sentenced to a year in prison and fined $500 under the new law.

The defendant told the court he did not need a lawyer, so the case was able to proceed, Vichet said.

“Police already spent time investigating and it is a red-handed crime,” he said.

Asked how the court guarantees a fair trial if the accused does not have a lawyer, Vichet said the court was following the law, which allows defendants to represent themselves in misdemeanor cases.

“We work to find justice for people, not to find injustice,” Vichet added.

People should follow the Covid-19 requirements to avoid legal action, he said, and declined to give the total number of accused involved in the four cases.

Fourteen of the Chinese defendants had already stood trial and were awaiting a verdict due on May 6, he said. The 14 did not want lawyers, he said.

Lim Sokhorn, deputy secretariat chief of the Takeo Province Court, said two of three Covid-19-related cases there had already reached a verdict, with six men convicted to a year in prison and $250 each in fines last week.

Sokhorn said he was not sure whether the six men had lawyers, but the court always asks the defendants whether they want legal representation.

Five others in the third case were in pretrial detention, he added.

Chak Sopheap, executive director of the Cambodian Center for Human Rights, acknowledged that Cambodian law allows courts to proceed with trials without a lawyer for some minor charges, but said having a lawyer is necessary to guarantee a fair trial in line with international law.

“The right to access a lawyer is necessary to guarantee that people have been properly consulting with [lawyers] and is a benefit for them in contesting [charges] during the trial stage,” Sopheap said.

The ongoing surge of Covid-19 cases was a difficult situation, Sopheap said, but urged that legal action be used only as a last resort.

In Phnom Penh, municipal police said it had sent more than 200 people to court for Covid-19 violations, though the court said it had only 22 cases involving 39 accused.

San Sokseyha, Phnom Penh municipal police spokesperson, said on Monday police had arrested 226 people between April 15 and Monday morning in the capital and sent them to court.

A further 234 people have been hit with an immediate fine, Sokseyha added.

Y Rin, secretariat chief at the Phnom Penh Municipal Court, said the court had reached one conviction out of the 22 cases so far.

The convicted man had cut police tape marking restricted areas, and was sentenced to a year in prison under the Covid-19 law, Rin said.

Four other cases were currently delayed as the accused had asked for lawyers, he said. The trials were due to resume on Thursday, he said.

“The accused need lawyers so the procedures need to be delayed, because we couldn’t immediately find a lawyer, and they couldn’t find one either,” Rin said.

Kampong Cham Provincial Court secretariat chief Chhorn Chandet said he had six Covid-19 cases involving 20 people. One man had already been sentenced to a year in prison, while the other 19 accused were in pretrial detention, he said.

So Sarin, secretariat chief at the Kandal Provincial Court, said from April 15 through Monday, the court had dealt with five cases involving 14 people, all Cambodians. All were in pretrial detention awaiting additional investigation, he said.