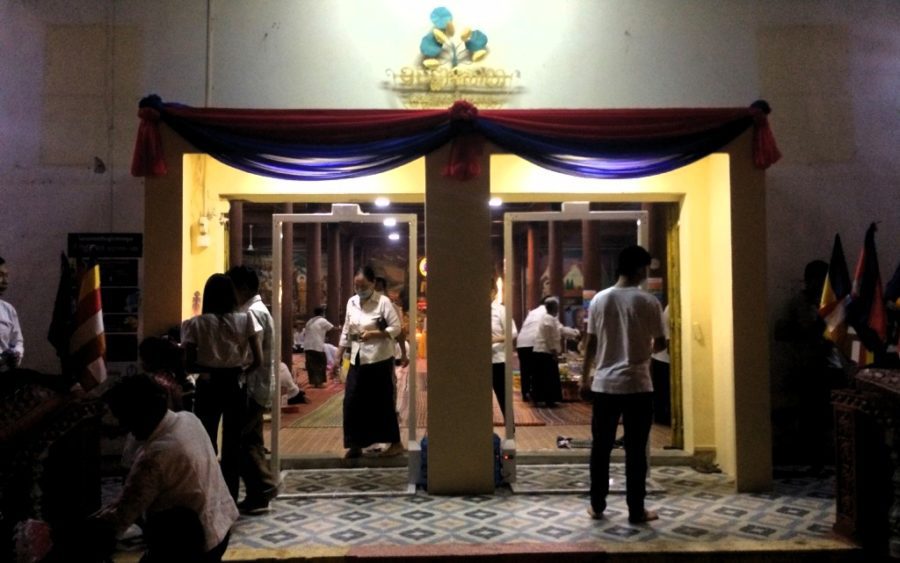 Worshippers merely trickled into several Phnom Penh pagodas on the first day of Pchum Ben early Thursday, with visitors saying they had to balance Covid-19 advisories and health risks against their desire to make ancestors’ spirits happy.

Before dawn at Wat Sansam Kosal, in Meanchey district’s Boeng Tompun commune, food sellers lamented the lack of customers as a small number of worshippers passed through automated disinfectant-spraying gates into the pagoda’s main hall.

It was barely worth it, she said, “but I need to support four children to study.” Buddhist holidays used to be her best days for selling num banh chok, she said.

She was sad for ancestor spirits whose favorite dish was the cold Khmer noodles: Those who loved them while alive continued to crave them as spirits, Sophea said.

Mom Mor, a lay priest, or achar, said ancestors would be unhappy at the low turnout, and it could even cause “some bad luck.”

But “it’s OK,” Mor said: People were just being cautious. “It’s because of the disease.”

He estimated that “thousands” normally attended the first day of Pchum Ben at the pagoda. Crowds would fill the main hall and even the roadway outside, he said.

Around 5 a.m. on Thursday, only about 50 people sat in the hall, listening to monks’ chants. Most wore masks.

Worshipper Pen Ly, 68, said she was concerned about health risks, but was determined to come anyway “for my ancestors.”

“If we don’t come here, we’re unhappy and our ancestors are unhappy,” Ly said.

Outside, shoe valet Yin Lon, 54, said that in other years there were so many visitors that “you couldn’t count how many.”

She would normally watch over hundreds of sandals that accumulated in great piles. This year, a dozen shoes barely covered half of her straw mat. “It’s so quiet,” she said.

The 15-day Pchum Ben festival is a time for many Cambodians to pay respects to deceased relatives. Three days around the festival’s final day, falling on September 16-18 this year, are designated as public holidays.

In a statement on Monday, the Health Ministry said worshippers who go to pagodas during the festival period should wear masks, wash their hands and maintain social distancing.

People who want to travel or have family gatherings should stay within their family group rather than mixing with others, it added. People are also advised to avoid crowded places, and it suggests that workers avoid using public transportation.

Since January, Cambodia has recorded 274 cases of Covid-19 and no official deaths.

Mor, the Sansam Kosal achar, said Thursday morning that the Religion Ministry had provided the disinfecting gates for the pagoda, along with two barrels of disinfectant.

Nearby Wat Dambok Khpors had no such amenities. Only about 30 visitors were in the pagoda’s main hall around 6:15 a.m., though people were frequently coming in and out.

Worshipping inside, Mor Horn, 73, said no one was staying long because of Covid-19 fears.

“They make an offering and leave the pagoda,” she said.

Guard Sou Saroeun said the pagoda didn’t get many visitors on weekdays anyway, but Thursday’s small crowd was an aberration.

“Everyone’s being careful,” Saroeun said, pointing out a single row of motorbikes parked in a lot that he said normally fills up for Pchum Ben’s first day.

At Wat Niroth, across the Monivong bridge in Chvar Ampov district, achar Tith Ros, 79, also said that the morning’s visitor count was down to about 100 from the usual “thousands.”

The pagoda had in recent days been broadcasting public health safety messages over its loudspeakers, telling visitors to wear masks, wash their hands and maintain a 1-meter distance between one another, he said.

The pagoda was being particularly proactive “because we respect the law,” Ros said.

“This is the way to protect ourselves. No one came to help us. People who don’t wear masks are being irresponsible — they lack discipline.”