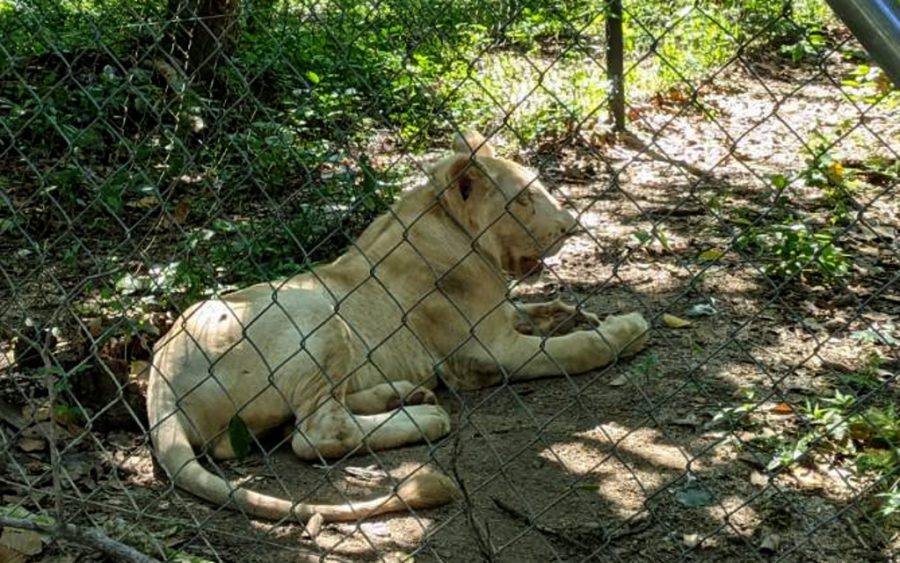 Prime Minister Hun Sen ordered authorities to return a lion to the Chinese owner who kept it as a pet, siding with celebrities’ and public support for the luxurious life the owner claimed to provide for the declawed and defanged animal.

Wildlife Alliance announced late last month that the conservation organization and Cambodian authorities confiscated an 18-month-old lion from a house in Phnom Penh’s Boeng Keng Kang I commune, transferring it to the Phnom Tamao Wildlife Rescue Center, which is government-owned and run by Wildlife Alliance and the Forestry Administration. WA claimed it learned of the lion through viral TikTok videos of the animal at its home, though when it was transferred to the conservation center, a flurry of social media users were upset to see a man lose his wild pet.

In his Facebook post on Sunday, the premier said he took the response on social media into account when deciding to return the animal, in addition to consulting Agriculture Ministry officials.

“I really appreciated people outside and inside the country for suggestions and compassion for the lion,” he wrote in the post, adding in the comments that the Chinese national would be refunded any fines he paid after the seizure.

The decision came after officials saw the strong reactions on social media and felt the lion was well taken care of, said Agriculture Minister Veng Sakhon. The owner would be required to sign a contract promising to provide appropriate care for the lion and ensure caregivers and neighbors won’t be endangered by the animal.

A Facebook user named Qi Xiao who claimed to own the lion gained tens of thousands of shares on a post asking for his lion to be returned. After his wish was granted, the user thanked Hun Sen and said he hoped Cambodia and China would retain a “strong relationship forever.”

Throughout last week, herds of Facebook and TikTok users were both condemning and supporting the rescue operation.

Singer Sok Pisey posted a photo of the lion lounging on a sofa inside the spacious villa, saying she was crying for the animal. “Please allow the lion to return to its home … I cannot stop my tears! The tears fall … [I] just pity the animal.”

Sethea Um, an actor, also called for the lion to return to its home. “To me, animals seem to stop eating food because they miss their owners,” he wrote. “Even if they go to live in Phnom Tamao, it is true, but [the place] cannot provide happiness like being with its owner. [But] if you cannot afford to raise like this owner, do not pretend to be a conservationist for animals.”

Pictures circulating of the cat at Phnom Tamao also drew some criticism of the lion’s care under Wildlife Alliance — which did not respond to requests for comment.

As the Phnom Tamao lion’s situation gained attention, Hun Chea, the prime minister’s nephew and a three-star general, on Friday also posted on Facebook about another lion being kept at Kampot’s zoo, saying he could take better care of the Kampot lion.

“Give it to me, I guarantee it will be eating a delicious and full amount of food, and [I] will take good care of it,” he posted.

When reporters visited the Phnom Tamao wildlife center on Saturday, before the lion was returned, a wildlife caretaker who wished to go unnamed shot back at the criticisms of Phnom Tamao, saying they feed the lion 5.5 kilograms of meat in a day, and that they have to boil it because the lion had its claws and some canine teeth removed.

The caretaker said the owner had made a dangerous move trying to own the lion, and the risks were only going to grow as the animal aged.

“The lion will never abandon its nature. When it grow bigger and wants to have sex, it will show its aggressive nature. [The owner] loves it, but one time, it will attack [the owner], they cannot control it,” he said. “It was very high risk that they did not place [the lion] in a cage. Now he is OK since he is small and has no claws … when it starts to grow to full strength, it will show its aggressive nature.”

The caretaker claimed that based on a chat with a driver for the Chinese national, the lion’s owner was connected to casino constructions.

The caretaker retained his claim that the lion would become more aggressive as it ages, but he said he had no choice as to whether the lion stays or goes at Phnom Tamao: “If brothers and sisters or senior leaders considered it is suitable for [the lion] to return to live with his owner, we will follow that decision. We just look after him, but when they order to give it back, we will follow it.”

Keo, a vendor selling fruit at Phnom Tamao to feed the animals, agreed that the lion had a luxurious life with air conditioning and food in a Boeng Keng Kang I villa, but said it was safer for the lion to live at the zoo, where it would have more space to roam.

“Living here is also safe,” he said on Saturday. “Why wouldn’t the whole Phnom Tamao [center] not be able to raise one lion to survive, since here the [center] already has hundreds of wild animals. It will take time [for the lion] to get used to the place.”

The lion did draw more visitors than usual, Keo noted, and said based on his conversations, about 60 percent of the zoo guests seem to support the lion’s owner in this spat.

Though some visitors at Phnom Tamao told VOD that the lion should return to the Phnom Penh owner, others felt the wildlife sanctuary was the right place for a lion under the circumstances.

Touch Phally, 62, said the lion looked sad and skinny, but she believed it would just take time for the lion to adjust to its new home, which is more fit for a big cat.

“I think this is a good choice to bring the lion here because he is a wild animal,” she said. “He does not need to stay in the house. Here is much more freedom for him as well as a new good home for him where he can  relax with nature.”

Dalin and Dara, a couple who came to see the lion, said they believed it should stay in the zoo, where he would have a more natural environment to roam than he could in a Phnom Penh villa. They believed social media users grew worried because they wouldn’t know whether the Phnom Tamao center was feeding it properly, but they also believed it was common behavior that animals don’t eat when they move to a new location — their own puppy wouldn’t eat for days when they first brought it home. However the couple had some questions about why a lion would be in Phnom Penh in the first place.

“I wonder how the lion can enter Cambodia, because we do not have this type of lion alive in Cambodia,” Dara asked. Dalin added that pet animals need a passport to travel between countries.

“Maybe when he brought the lion over the border, it was seen as a cat, and when it became bigger, it’s clearly a lion,” Dara said. “I better not talk more about it.”

Correction: A previous version of this article misstated that Hun Chea was referring to the Phnom Tamao lion, not another lion in Kampot.