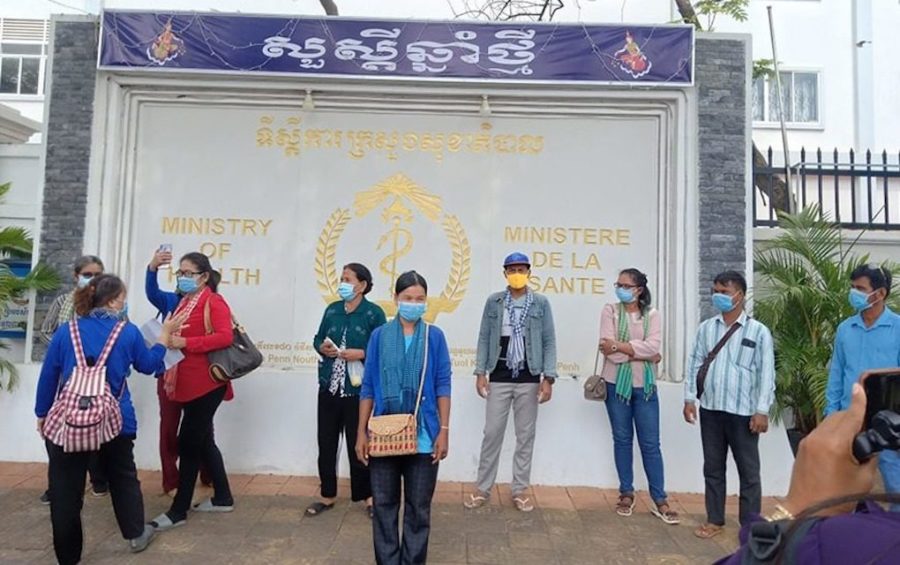 Activists submit a petition to the Health Ministry requesting alcohol-based sanitizers, face masks and other social support from the government on April 28, 2020. (Supplied)

Ten petitioners who called on the government this week to provide debt relief and protective health supplies to poor citizens were detained and questioned in Phnom Penh and Kampong Speu province, and then released after agreeing not to petition the state again.

The community representatives from at least five provinces intended to deliver petitions on Tuesday to the ministries of health and finance, Council of Ministers and Prime Minister Hun Sen’s cabinet office in Phnom Penh, the activists said. But nine were held for questioning by local authorities for about 10 hours, while another activist was questioned in Kampong Speu’s Oral district on Thursday.

After attempting to deliver petitions in the capital, Seong Sokhom told VOD that he was called in for questioning by Trapaing Chor commune police and released at about 5 p.m. on Thursday after signing a contract with authorities in which he agreed to stop submitting petitions.

“It is an injustice for me because I didn’t do anything wrong, but they turned to call me to make a contract,” Sokhom said.

The activist said he had gathered people in his community in the past to demand an end to land encroachments by private interests, but since the global Covid-19 pandemic reached Cambodia, community members have not gathered because they were scared of the virus.

“I went to Phnom Penh to submit petitions with just 10 representatives,” he said.

Sokhom said they had asked for government intervention to ensure microfinance lenders and banks would allow loan payment delays during the current economic downturn, and also called on officials to provide alcohol-based sanitizers and face masks, and raise awareness about preventative health measures in poor communities.

Phav Nhoeung, a representative of Koh Kong residents, said on Wednesday that she and eight others were detained by Daun Penh district security guards on Tuesday afternoon after they tried to present their petition to the office of the prime minister’s cabinet. Nhoeung said the group was held until 10 p.m. and forced to thumbprint a contract before being released.

“I regret that we have authorities who do not respect the law on human rights, human rights treaties and the Constitution,” Nhoeung said. “So, next time…I ask that they respect human rights because they are human and I am also human, not a dog.”

Ny Sandos, a Phnom Penh community representative, said she too had petitioned the government for debt relief, but ended up feeling more pressure.

Daun Penh district governor Sok Penh Vuth ordered her and the eight other activists to stop delivering petitions and to show up for any future questioning, according to Sandos.

“Even though they did not beat us up or mistreat us, it seemed like I was being seriously threatened,” she said.

Soeng Senkaruna, spokesman for human rights group Adhoc, said submitting a petition was a peaceful and legal way for citizens to express their needs or concerns. The government’s decision to detain and question petitioners appeared to be a threat meant to stop them from expressing their views in the future, he said.

“If we look into the fundamental freedom of expression, people have the right to submit [a petition] to demand a solution from state institutions,” Senkaruna said. “So when [the government] is arresting them and continuing to call them for questioning, it is a threat to the spirit of those who are demanding [solutions].”