Phnom Penh Governor Calls for End to Threats Against NGOs 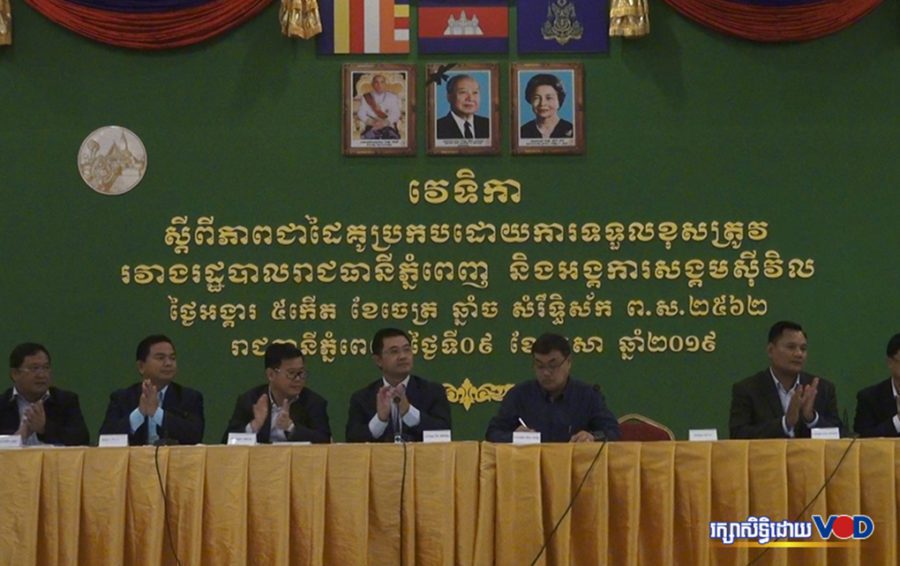 Speaking at a meeting of civil society organizations on Tuesday, Sreng, who as deputy city governor helped lead the violent repression of protests in Phnom Penh in 2013 and 2014, called on police, military police, district officials, municipal departments and any other relevant units to permit free public gatherings.

“Please help to find compromises and make it easy for associations and local NGOs that have been properly registered at the Interior Ministry, [and] foreign NGOs that have signed MOUs with the Foreign Affairs Ministry, to conduct their activities freely, without threat and bias,” Sreng told the meeting.

All parties, he said, should act “in accordance with the Law on Associations and Non-Governmental Organizations, directives, orders and regulations in force.”

The controversial law, commonly known as “LANGO,” as well as the government’s general treatment of civil society groups, has been a main focus of the European Union’s ongoing review into Cambodia’s rights situation, with warnings the country’s tariff-free export access to Europe could be revoked.

Deth Bunthok, vice chairman of the board of the Hands of Hope Community, which supports children with disabilities, welcomed the city governor’s appeal, explaining that local authorities had repeatedly blocked his organization from holding forums even when it submitted letters requesting permission.

“After today, seeing that district governors were present [at the speech], I think when they return back, they can pass on this information to local officials and local authorities can cooperate with us,” Bunthok said.

Am Sam Ath, an investigator at local rights group Licadho, said the appeal was a positive sign that relations between the city and civil society might be restored.

“We will wait and see whether all the authorities will cooperate with civil society in order to allow civil society to work freely and what level it will be,” Sam Ath said. “We will monitor this further.”

Relations between authorities and civil society deteriorated rapidly over the past three years following the arrest of four senior officers from local rights group Adhoc in 2016 in relation to opposition leader Kem Sokha’s sex scandal.

As elections approached in both 2017 and 2018, some NGOs were threatened for reputedly being part of a “color revolution” seeking to destabilize Cambodia. The U.S.-funded National Democratic Institute was forced to leave Cambodia and civil society events across the country were broken up by local authorities.

Recently, a march for International Women’s Day was also blocked by police. On Saturday, a group of young environmental activists were prevented from holding a New Year’s celebration to clean up the trash-laden Boeung Trabek canal.

In the wake of the government’s victory in last year’s opposition-less national election, Interior Minister Sar Kheng issued a directive on October 31 requiring city and provincial administrations to hold consultations with NGOs, associations and local communities every six years to strengthen cooperation.

Kheng stated in the directive that groups properly registered with the Interior Ministry could even hold activities without informing authorities in advance. He also recently called for the government to listen more closely to NGO advice.