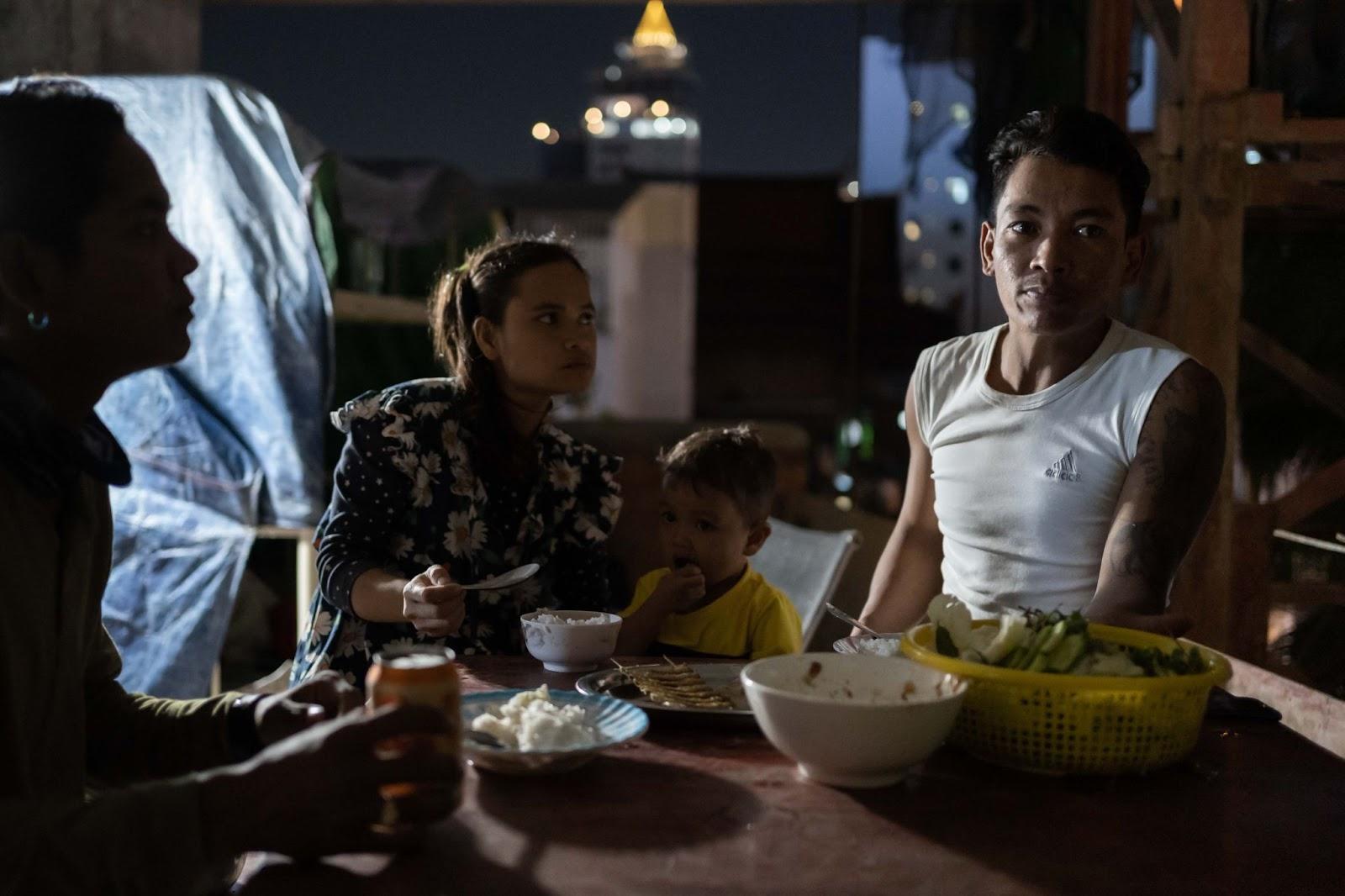 The day may be done for 34-year-old construction worker Ma Srieng, but he will not be joining the revellers on Bassac Lane tonight—or any other night for that matter. Instead, as the streets below begin to swarm with life, Srieng, his 29-year-old pregnant wife Som Theary and their 2-year-old son are settling in for dinner on the building site where they work.

“Living onsite, there’s no peace,” says Srieng, one of the estimated 250,000-785,000 construction workers who have helped transform Phnom Penh’s skyline in recent years. “It’s always noisy, there are always other workers coming and going, it’s not safe and there are disturbances, even when we’re tired and just want to relax.” 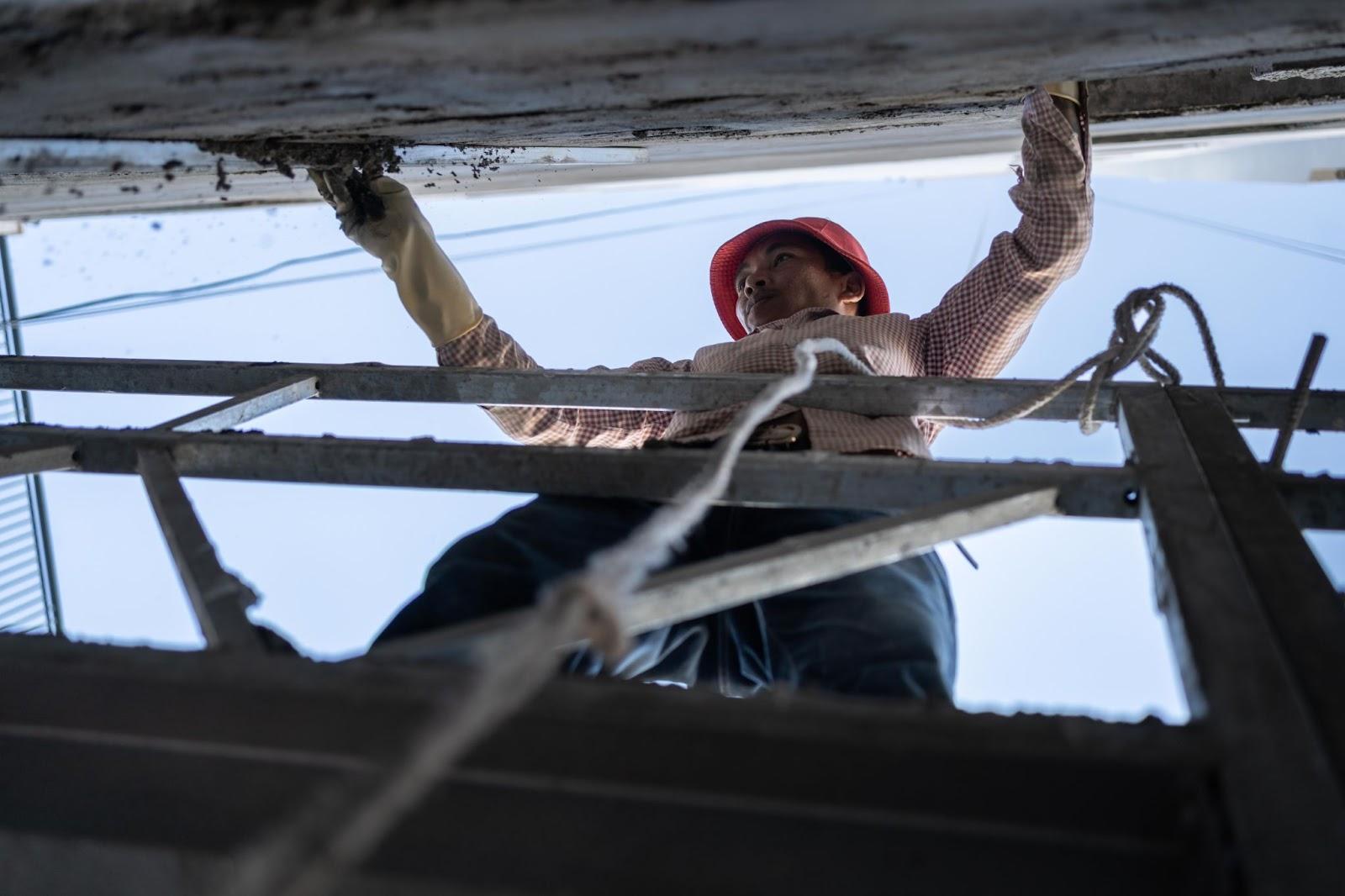 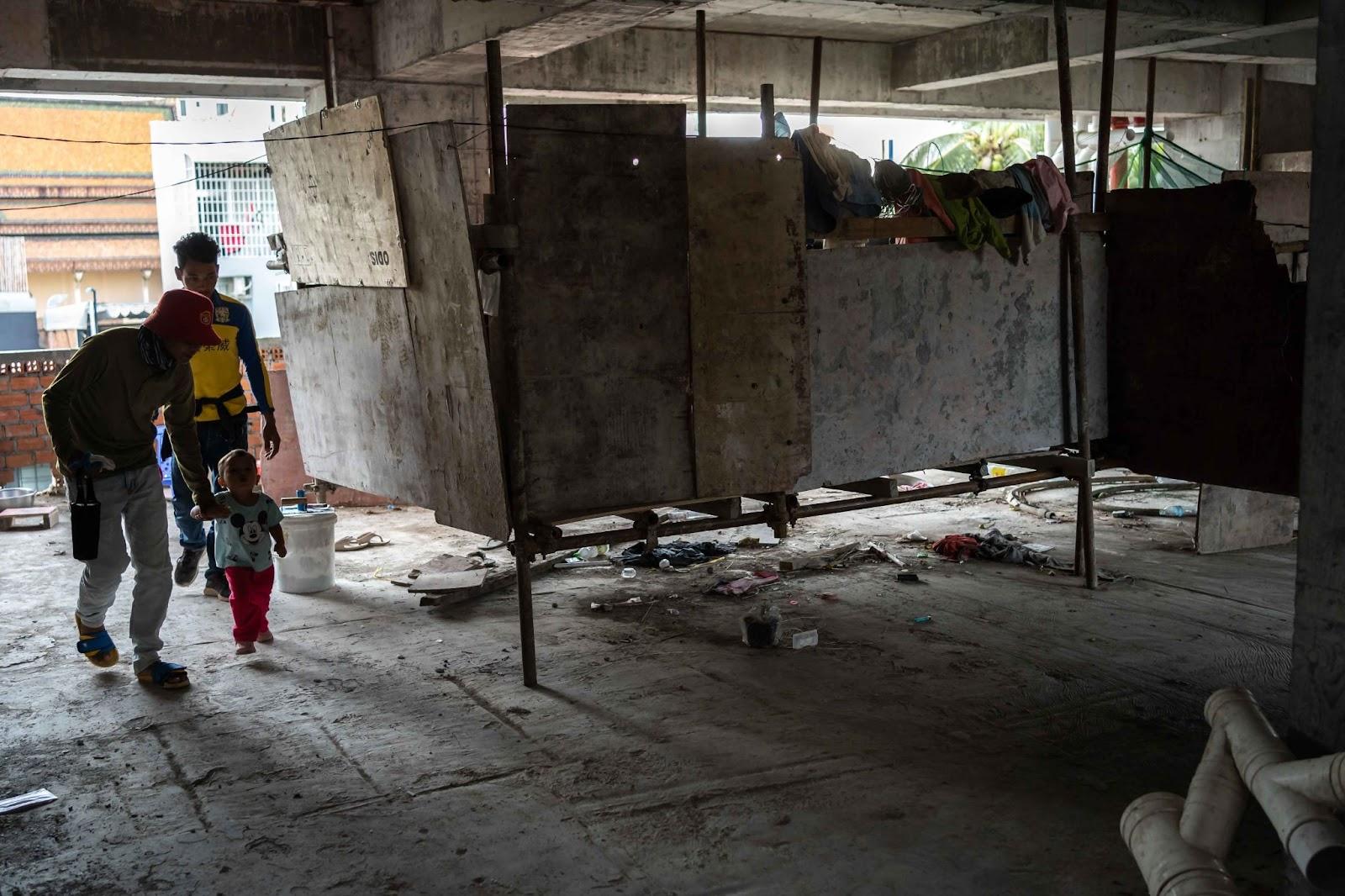 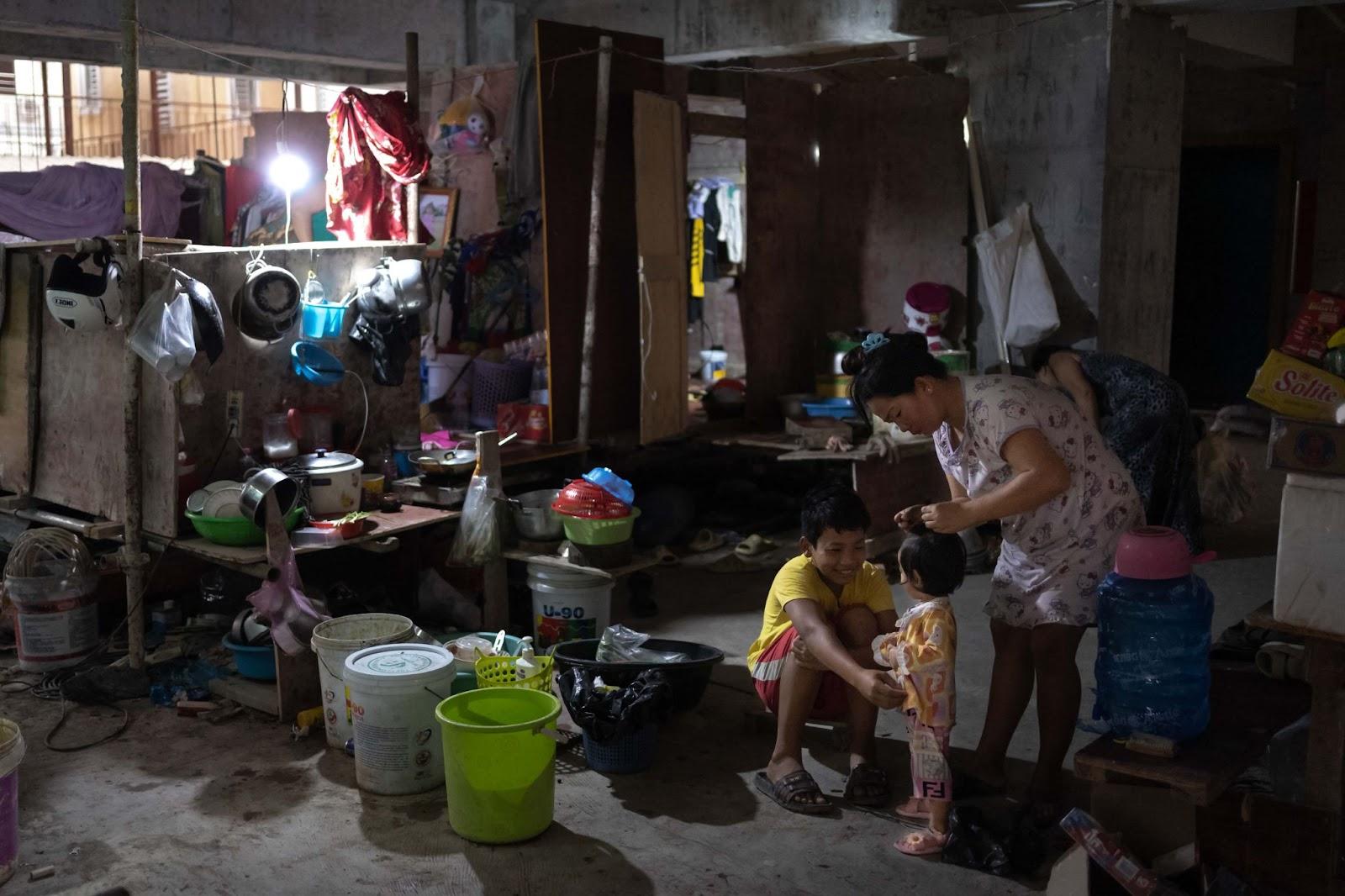 A family living on the site at Bassac Lane. 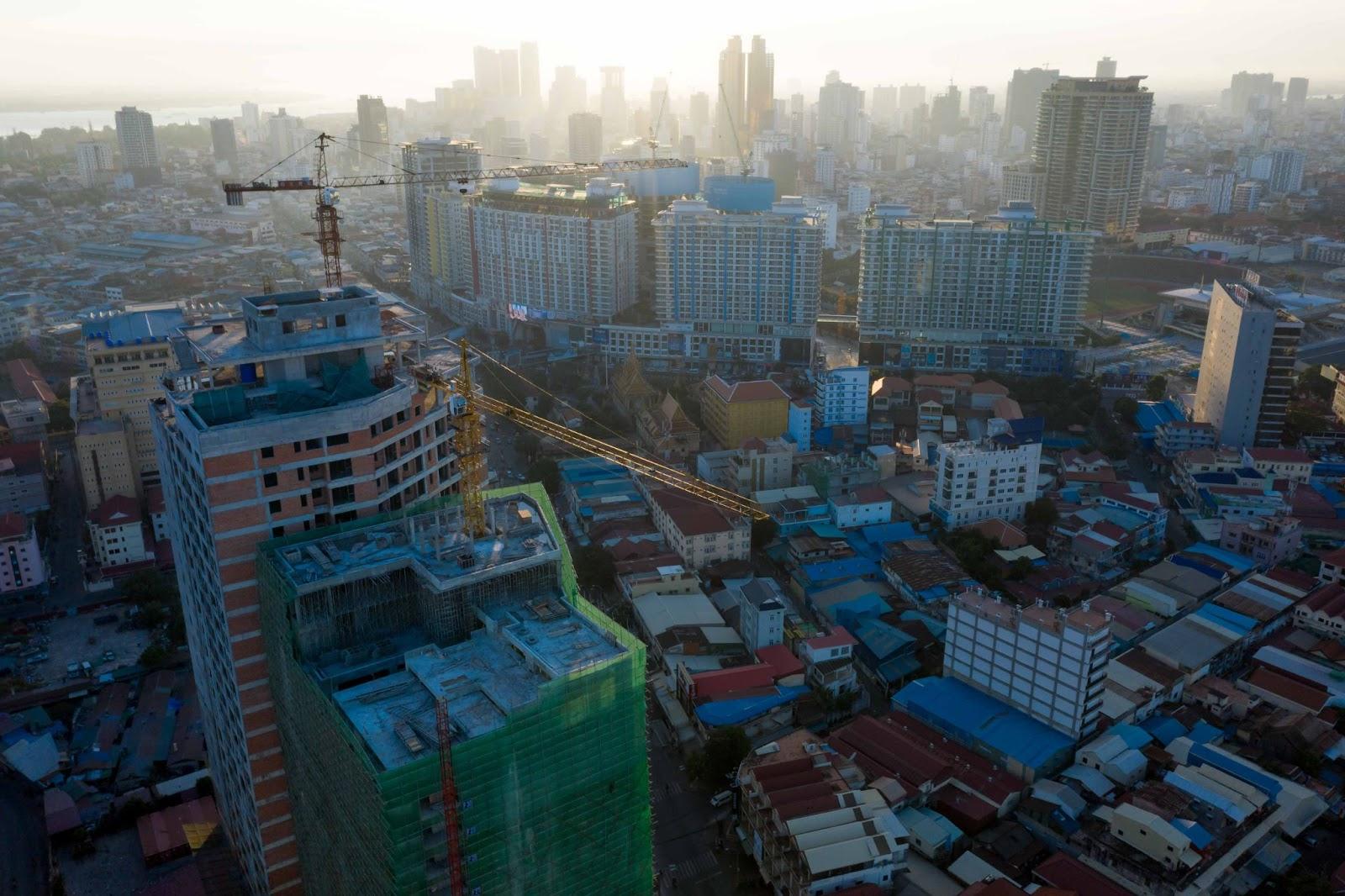 Phnom Penh’s skyline has changed dramatically over the last decade as a result of a construction boom. Despite the fallout from the pandemic, the construction sector still attracted an investment of US$10.3 billion in the first 11 months of 2021.

In recent years, however, building collapses have brought the cost-cutting methods of the sector crashing into the public spotlight. On 22 June 2019, a seven-storey building in the coastal city of Sihanoukville collapsed in the early morning, killing 28 and injuring 26. Those who died were workers who had been sleeping in the unfinished building.

It later emerged that the Chinese building owner and construction supervisors had not acquired the required building permits.

Officials said construction had started without the owners obtaining a licence and while they had been permitted to build a six-storey building, the whole thing came crashing down while a seventh was being built.

Despite the massive capital infusion in the sector in recent years, construction workers at the Bassac Lane site say little has changed in terms of worker safety.

One nearby street vendor who wished to remain anonymous complained of debris falling from the site. Reporters spoke with workers who told of grim conditions which they believe led to the deaths of two colleagues. After a strike, the owner of the building fired them all and simply recruited a whole new staff.

According to Srieng, when labor inspectors do visit sites, they don’t speak with workers or actually inspect the site for safety violations. Instead, the inspectors meet with site managers or representatives from the building company and then leave, he says.

“They don’t inspect, they just take money—if they weren’t taking money, there’s no way that our site would still be operational,” laughs Srieng.

A 2020 report from the US Department of Labor on the Cambodian industry says “labor inspectors were rarely able to conduct inspections in the construction sector, as owners who were closely affiliated with government officials were able to obstruct labor inspectors from accessing their properties”. 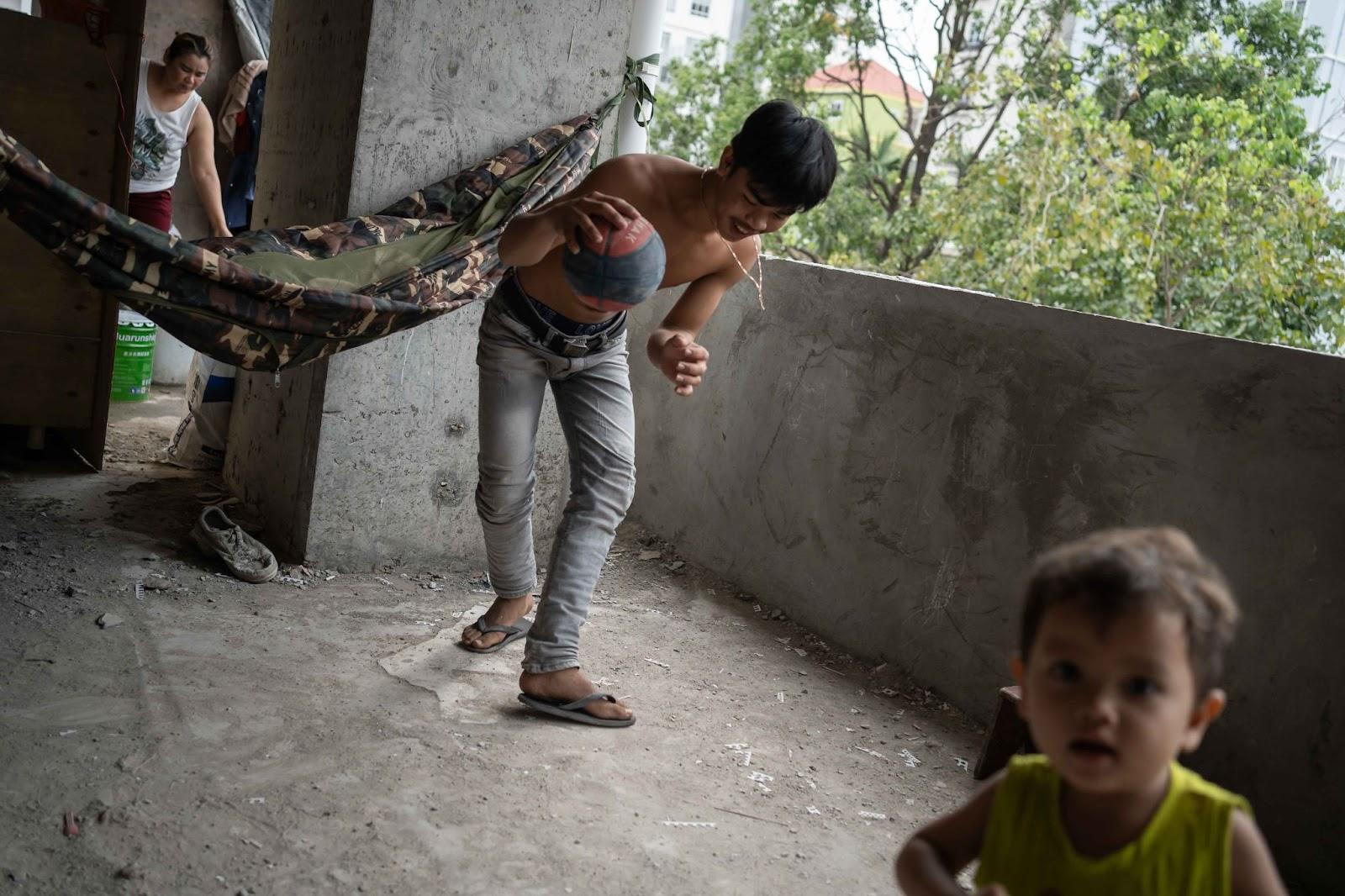 A construction worker dribbles a basketball at the Bassac Lane site. 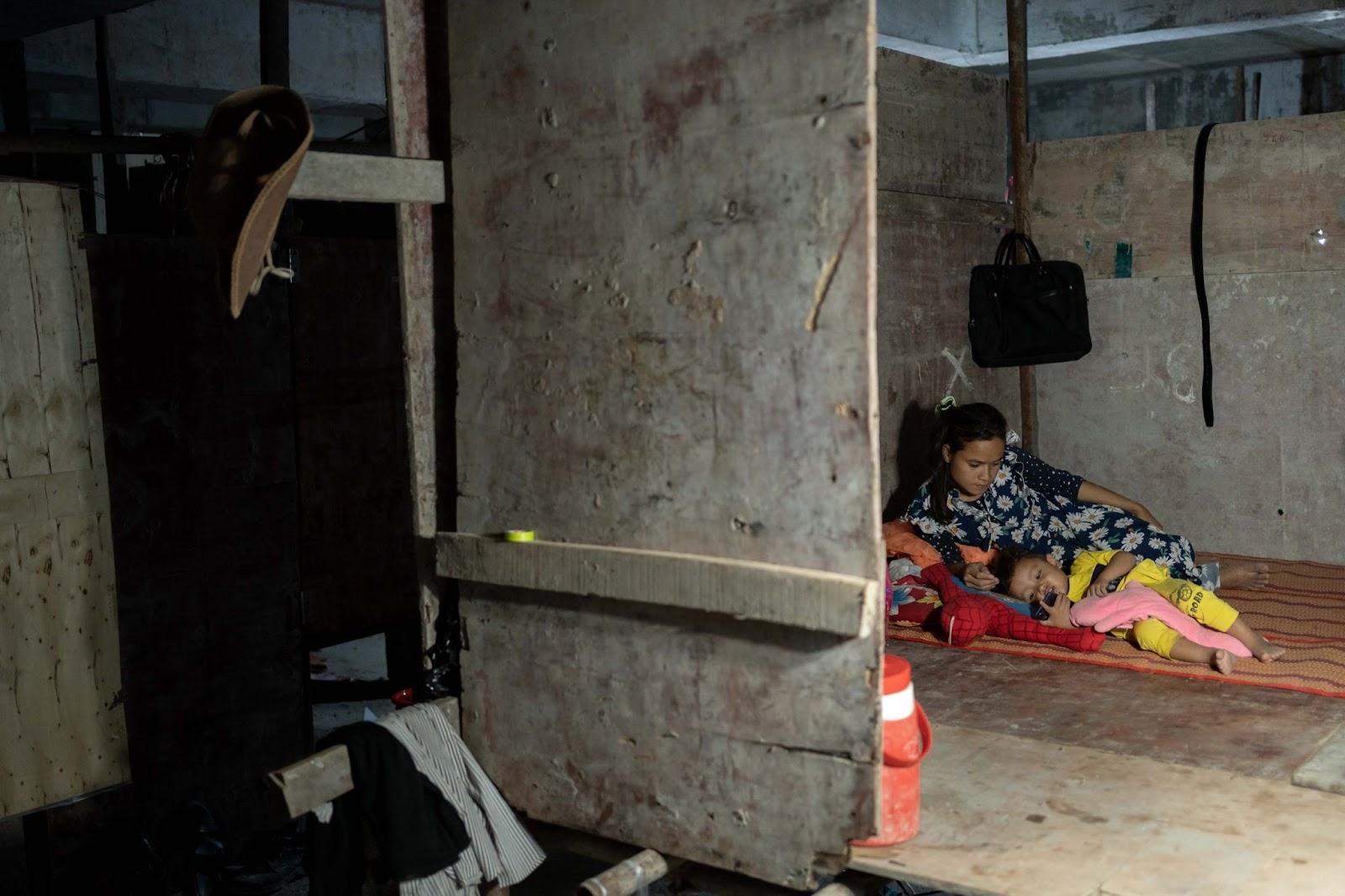 Som Theary watches a video on a phone with her 2-year-old son before going to bed at their onsite accommodation. 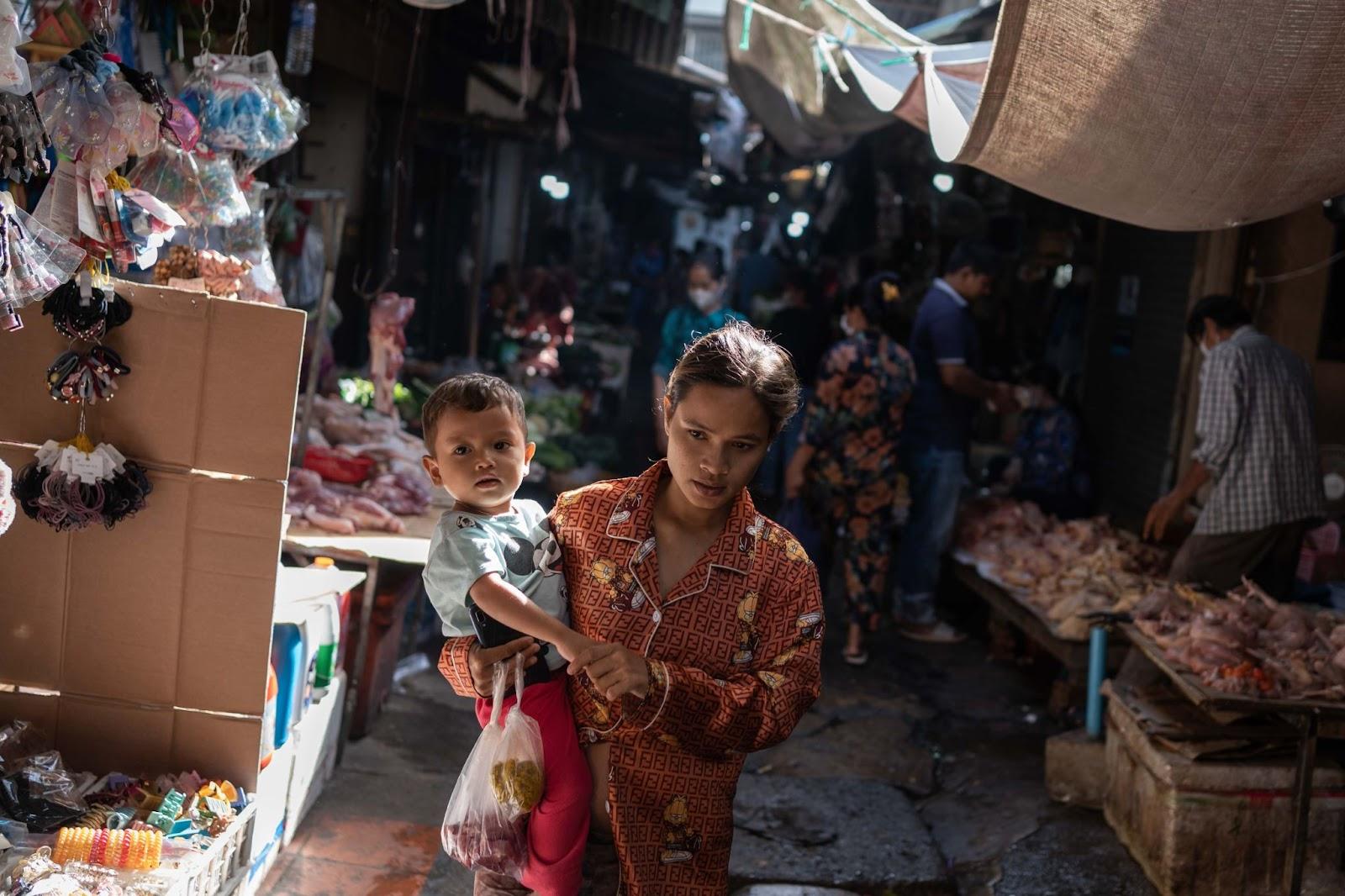 Theary was six months pregnant as of January 2022, and Srieng is determined that his next child will not have to live on a construction site after being born.

“It’s so hard to get up and down, to get out to the market, but I can handle it—I’m used to living like this,” she says with a smile as she plays with her son. “I move with my husband, we’ve lived on building sites since we were married, we have each other and the other women onsite all look out for each other and each other’s children.”

Dieb Phearum, a 26-year-old from Kampong Chhnang Province and cousin of Srieng, explains that he quit the Bassac Lane job after just 10 days in January 2022 because his pay came late. In order to buy food, he pawned a ring his mother gave him.

“I don’t want to work in construction again. It’s exhausting and I don’t want to live like this. I just want to go back to my village and raise livestock,” he says. “There were too many safety issues from the lack of helmets, gloves and boots.” 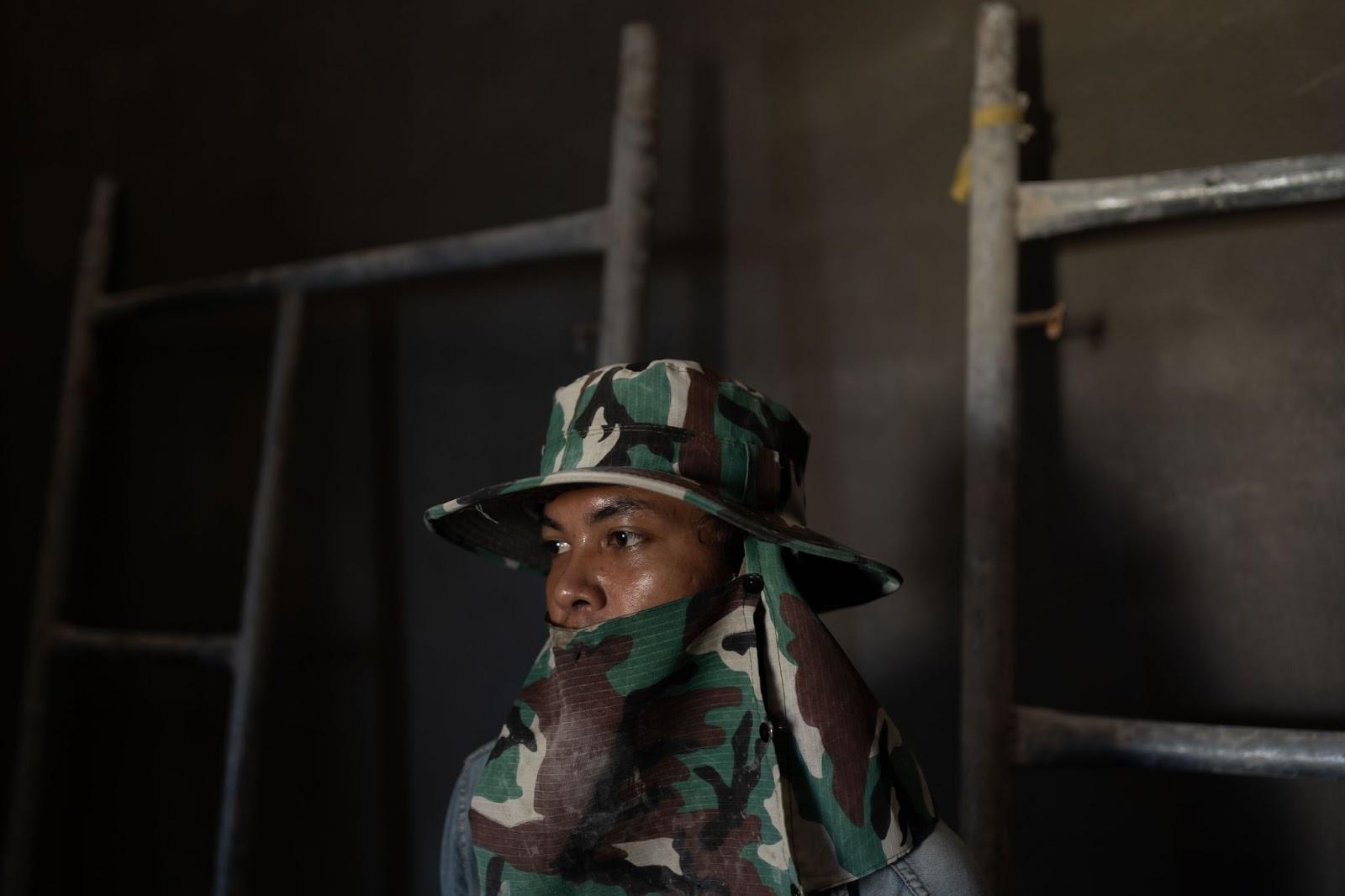 But by late February, Phearum was working again at a smaller construction site on the outskirts of Phnom Penh in Kambol District. 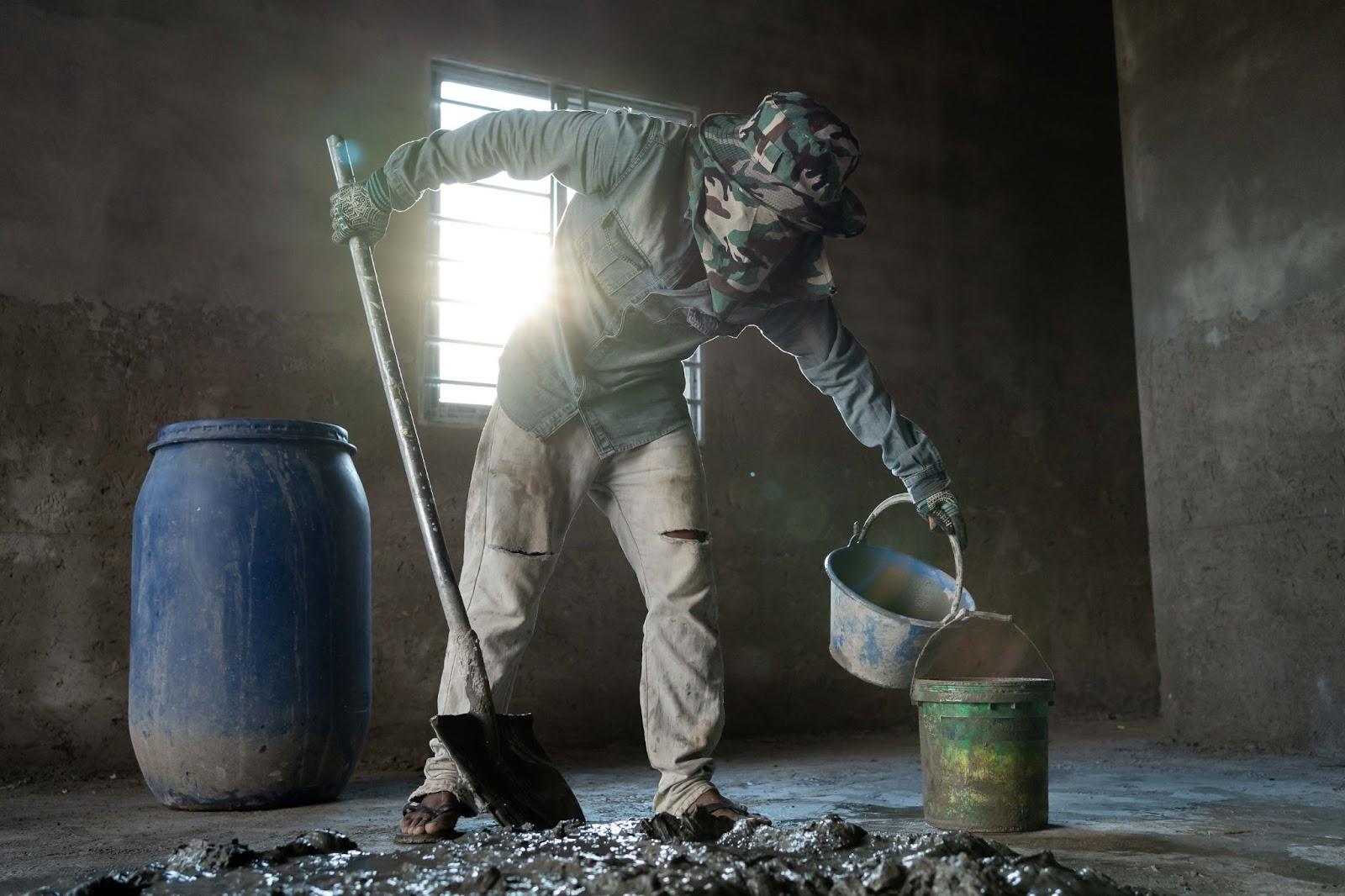 Sim Ry, a 29-year-old site manager in Kambol, says he does this job because he “lacks the networks” to get better, higher-profile jobs with better pay and safety protocols.

Ry says he has worked in construction since he was 15 years old and that accidents, injuries, not getting paid and not having enough food to eat are all just part of the process.

Phan Sochantra, one of Ry’s colleagues, agrees. “Two months ago, the site I was working on just stopped paying everyone because the day I was supposed to get paid, a subcontractor ran away with all the money. Every construction worker experiences not being paid at least one time. We went for two months without pay.”

Sun Kim Yan, another construction worker on the site, speaks of the camaraderie that develops among labourers who work, eat, sleep and play together, rarely leaving the site they’re working on. While the workers come from different provinces, their problems are similar. They face poor treatment “because we’re cheap,” he says.

“There are no jobs in our villages, so we all take out loans, then we come to work in construction as we are in debt, but in construction, there’s no contract—everything is just a verbal agreement.”

Ry, the site manager, recounts how he fell out of a skyscraper he was working on in Toul Kork District in 2017.

“I fell because I was careless,” he says. He had tried to carry a bucket of cement up scaffolding without holding on properly.

“Life in the construction industry is just survival,” Ry says. He says he believes he lacks the skills to do anything else. Everything he’s learned has been picked up on the job, making it a risky environment to make a mistake in. 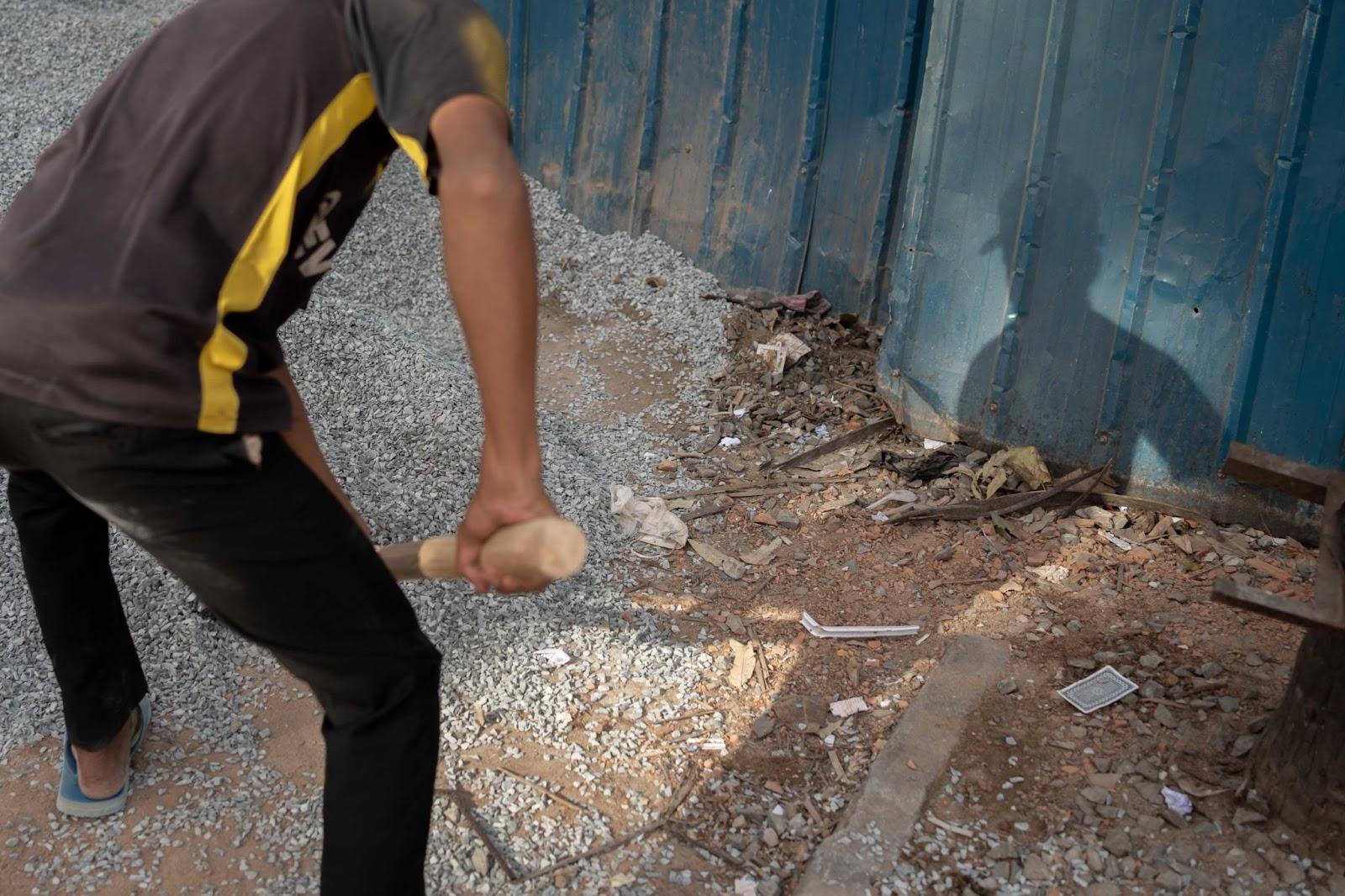 A young worker shovels gravel just outside of the Bassac Lane construction site. In 2017, the Building and Wood Workers Trade Union Federation of Cambodia conducted a survey of 1,010 construction workers, 12% of whom reported that they felt unsafe on construction sites, 19% had been injured while working and 41% complained about the lack of safety equipment provided or used onsite. More than half of workers surveyed—62%—said they had received no training or information from their employer or any vocational training programme regarding occupational safety. 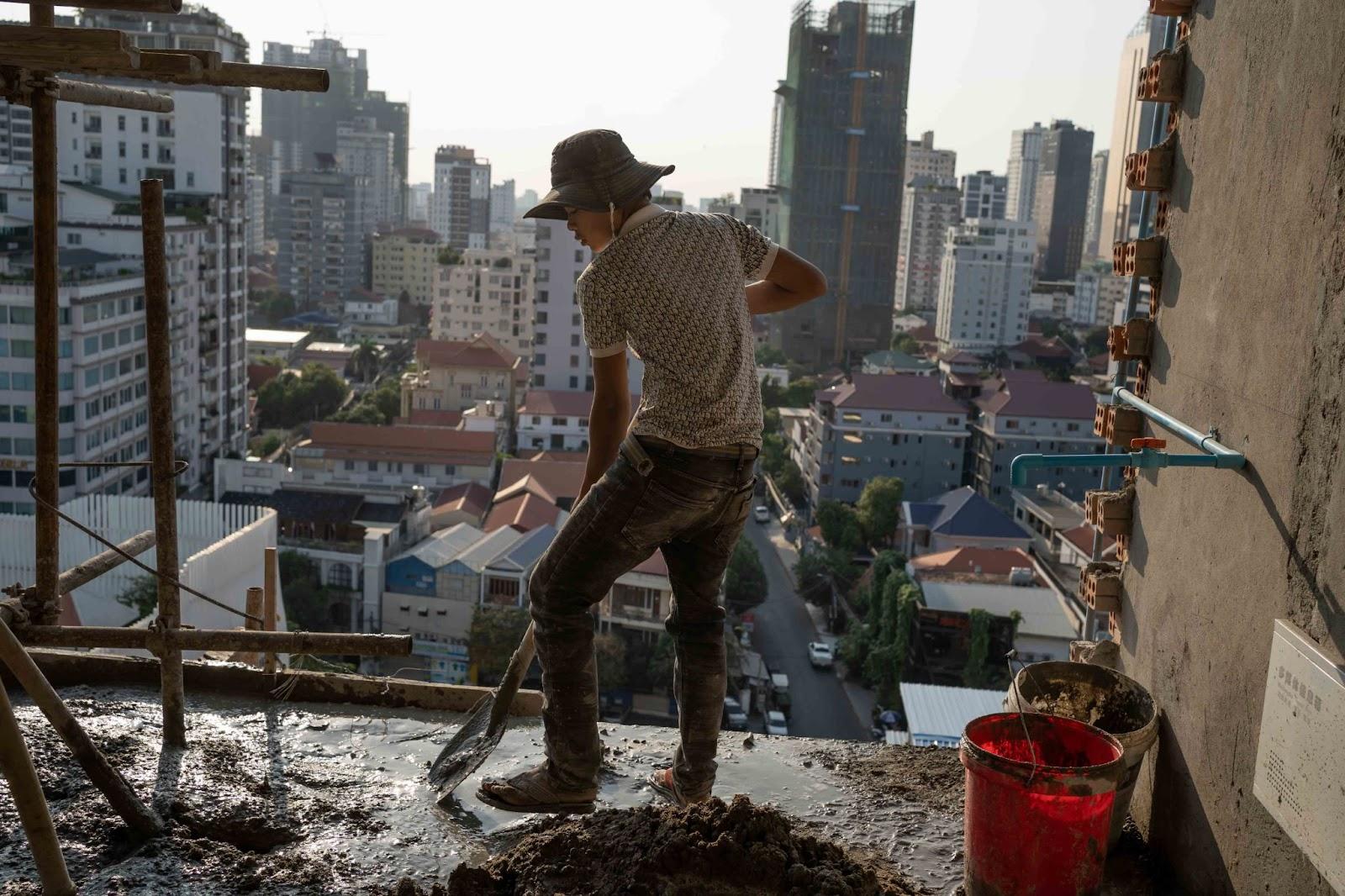 Among the benefits sought by workers is access to the National Social Security Fund, a government scheme covering healthcare costs associated with workplace injuries. By late 2020, the Labour Ministry announced that informal workers would also be able to receive healthcare by registering for NSSF benefits.

However, Yann Thy, secretary-general of the Building and Wood Workers Trade Union Federation, says his attempt to register nearly 10,000 members was rejected. “We failed to get it approved because the [government] required them to certify the profession and current address.” Thy says most construction workers lack a fixed address. 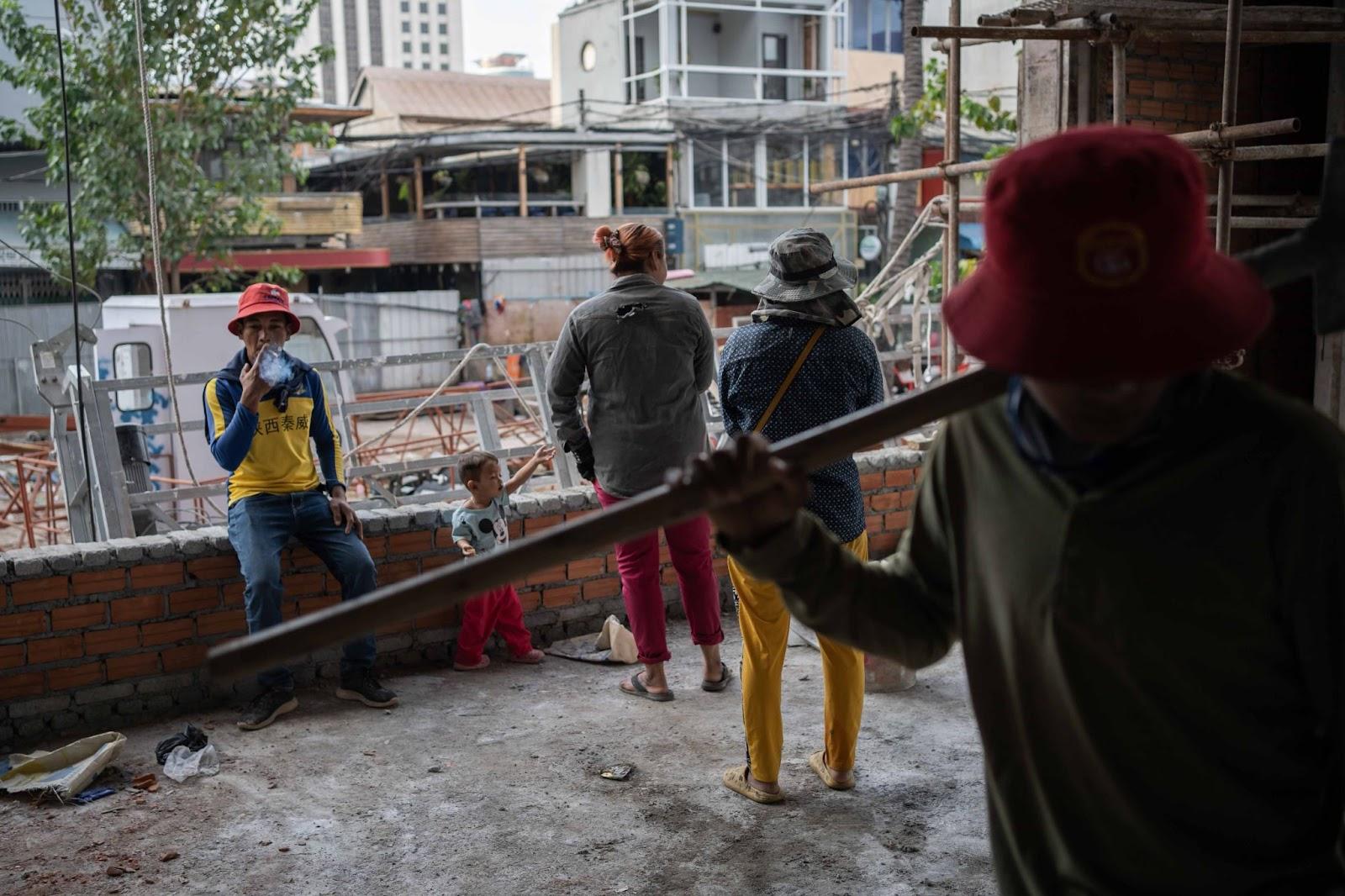 The rise of subcontracting, the seasonal shift from construction to agricultural work and the general informal nature of the construction sector make organising workers a challenge. “Sometimes they work for a few months then move to another construction site because the wage is less or it’s difficult to get paid,” Thy says. “The [workers’] voice is divided.”

The fractured labour movement within the sector makes it tough for BWTUC to hold much sway with the government. 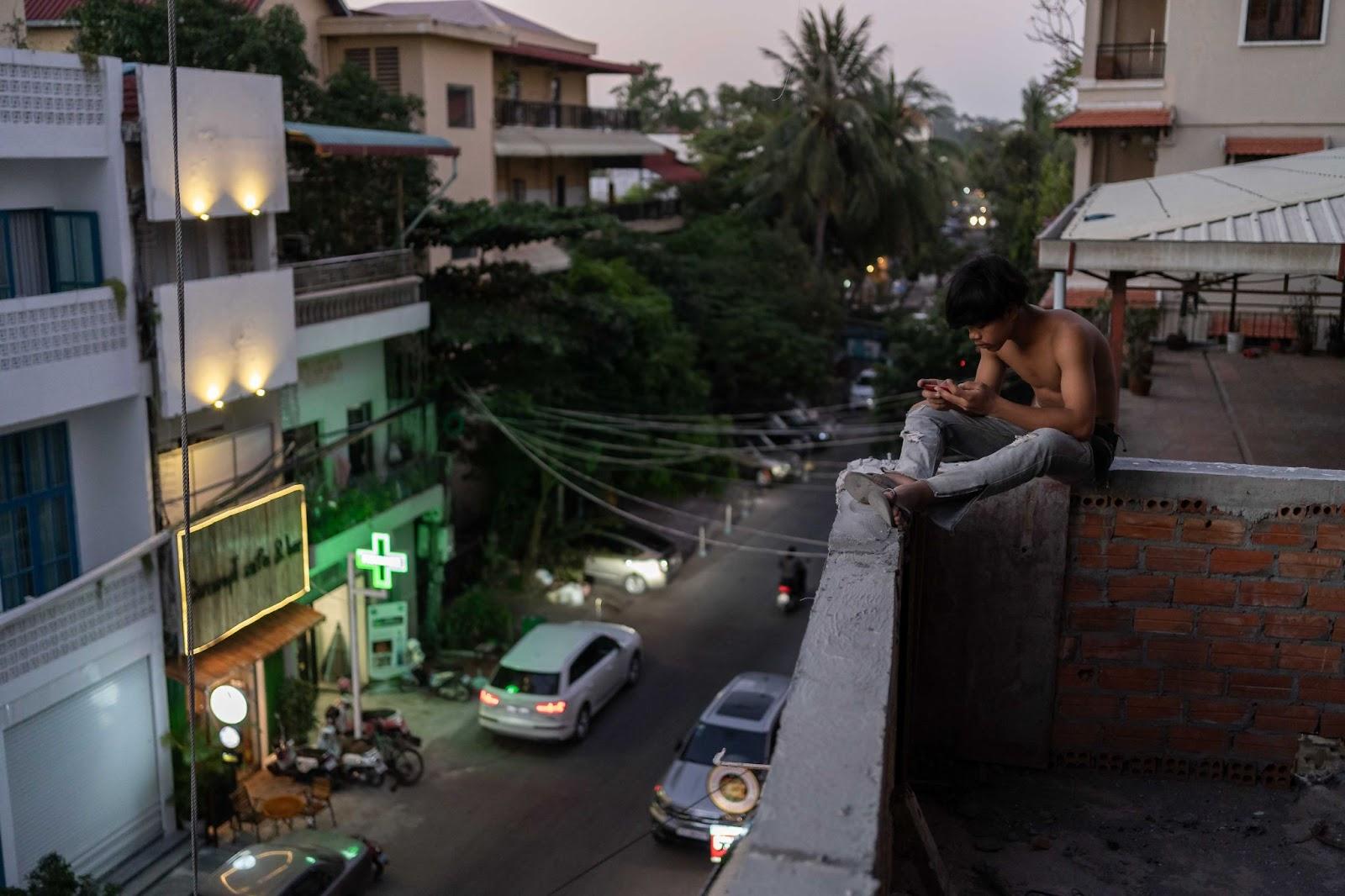 In January 2020, the Ministry of Labour issued a statement over dangers at construction sites and the lacking law enforcement that drives it, including infrequent onsite inspections, developers building without proper permits, little access to NSSF benefits for workers and inadequate compensation to the families of those killed onsite while working.

The Ministry of Land Management also issued a directive on 1 February 2022 that lays out more specific instances in which the authorities can take action, such as if a construction site poses a threat to the public, is at risk of collapse or does not meet safety standards.

But the union says much of this will be hindered by a lack of enforcement. “In the end, nothing changed,” Thy says. “Right after the building collapsed in 2019 in Sihanoukville, the Labour Ministry made an announcement that workers should not be allowed to sleep onsite—it was not a law, just an announcement—and what has the actual implementation been so far? There are still workers sleeping on site. The problem is still a problem.”

He says unionists are also feeling under pressure. “We feel intimidated and scared,” admits Thy. “We have families, wives and kids. Look at Kem Ley and Rong Chhun — this intimidates us. We try to continue our work and not associate ourselves with [political] opposition members.”

Seng Lot, spokesperson for the Ministry of Land Management, did not respond to repeated requests for comment.

Heng Sour, spokesperson for the Ministry of Labour, did not respond to multiple requests for comments.

Heng Sophannarith, deputy director general of the NSSF, said: “NSSF has never refused to register an enterprise, as it covers all sectors including individuals in the public sector, persons subject to the provisions of the labour law, including the air and sea sectors and domestic servants, and self-employed.” 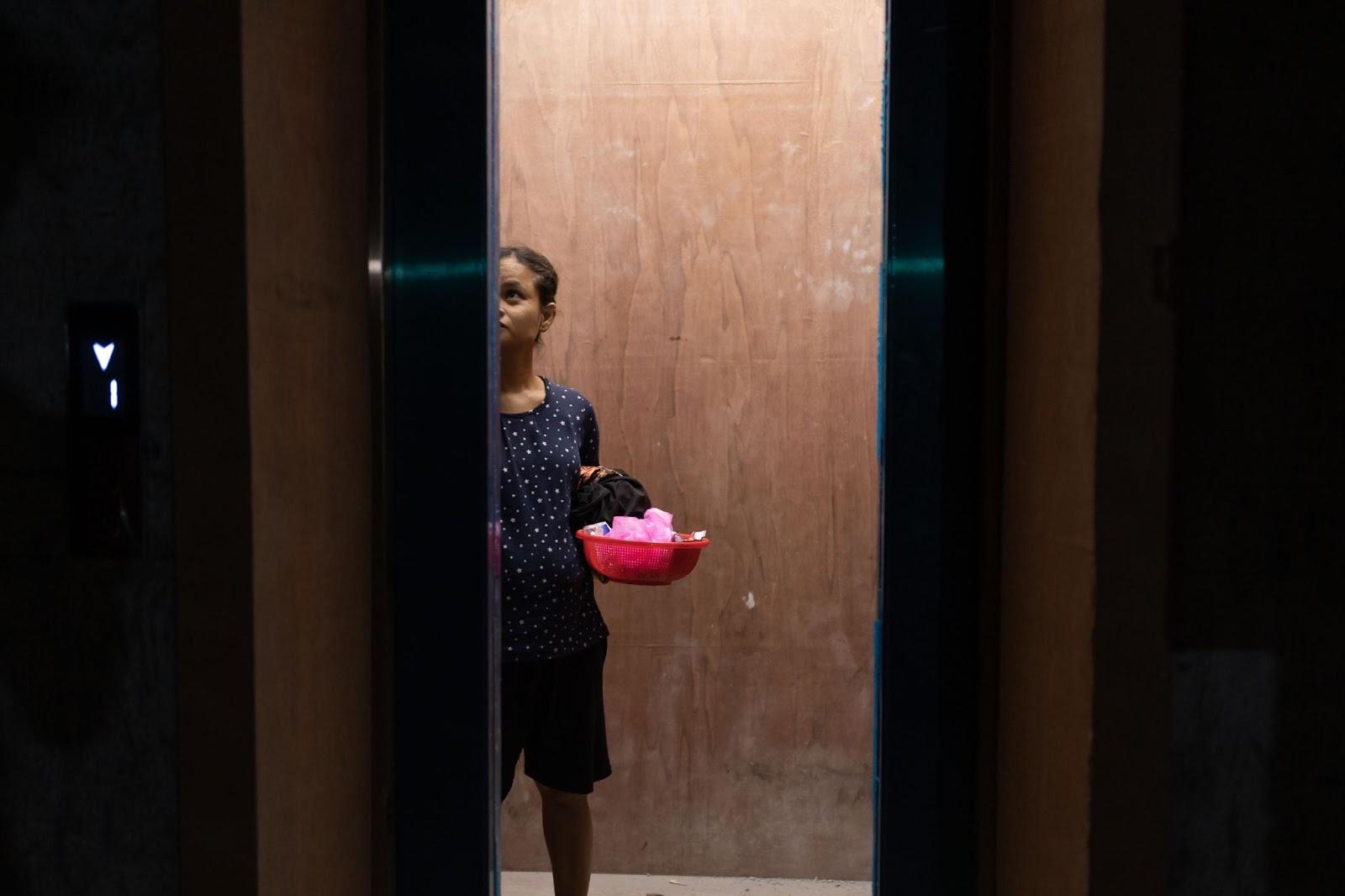 Som Theary uses the construction elevator to get to the ground floor to shower. At seven months pregnant, she’s unable to comfortably use the stairs. 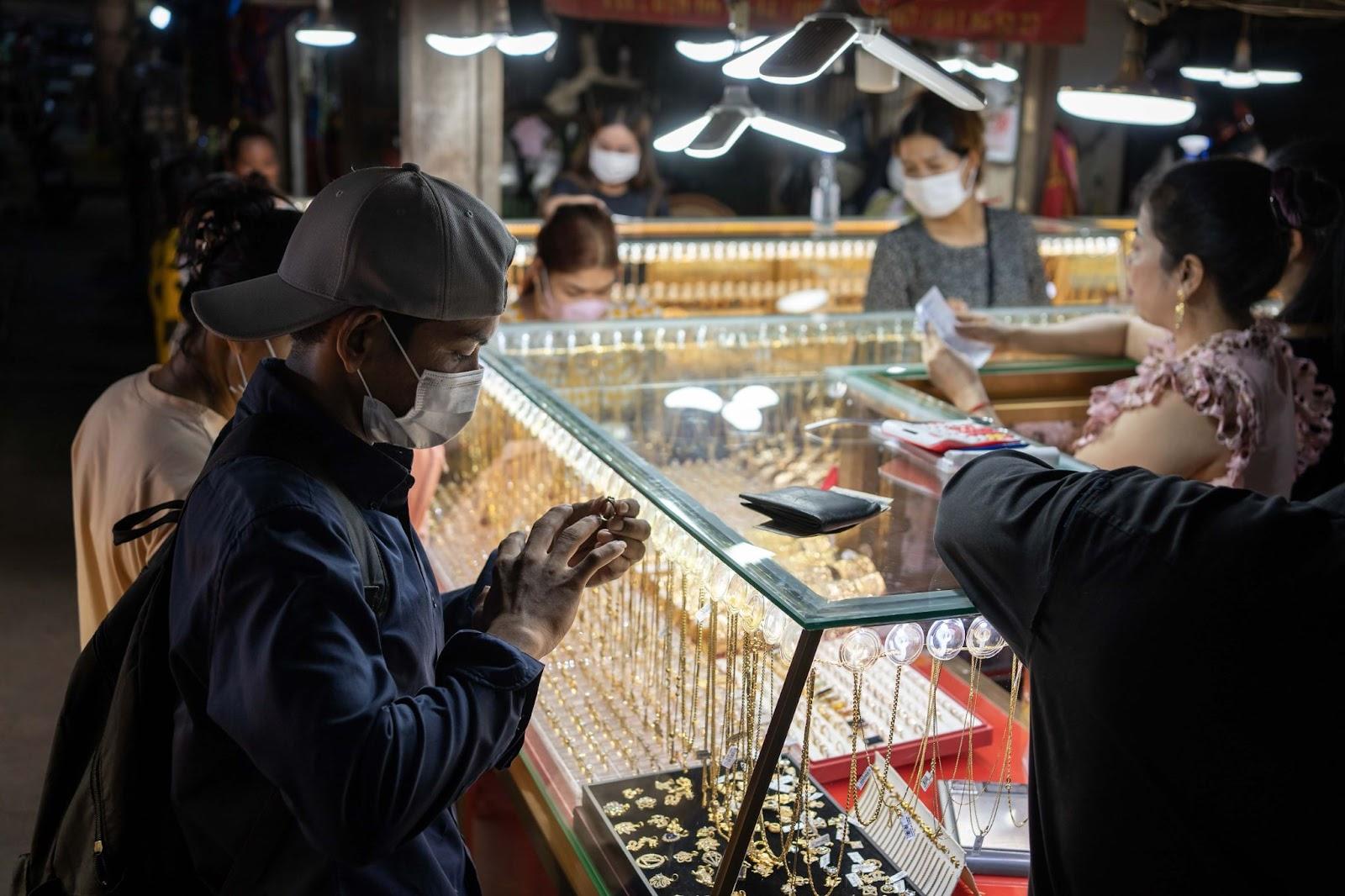 Dieb Phearum buys back a ring his mother gave him for US$55 at a pawn shop.

As of late February, Srieng had quit his job at the Bassac Lane site and moved to Sihanoukville for one last job before his next child is due. While Srieng’s family have temporarily dodged the worst of Cambodia’s construction sector, Srieng knows he will likely be drawn back into it until he can afford to turn his dream of farming fish into a reality.

“If I die while working, all I want is for my family to be supported financially.” 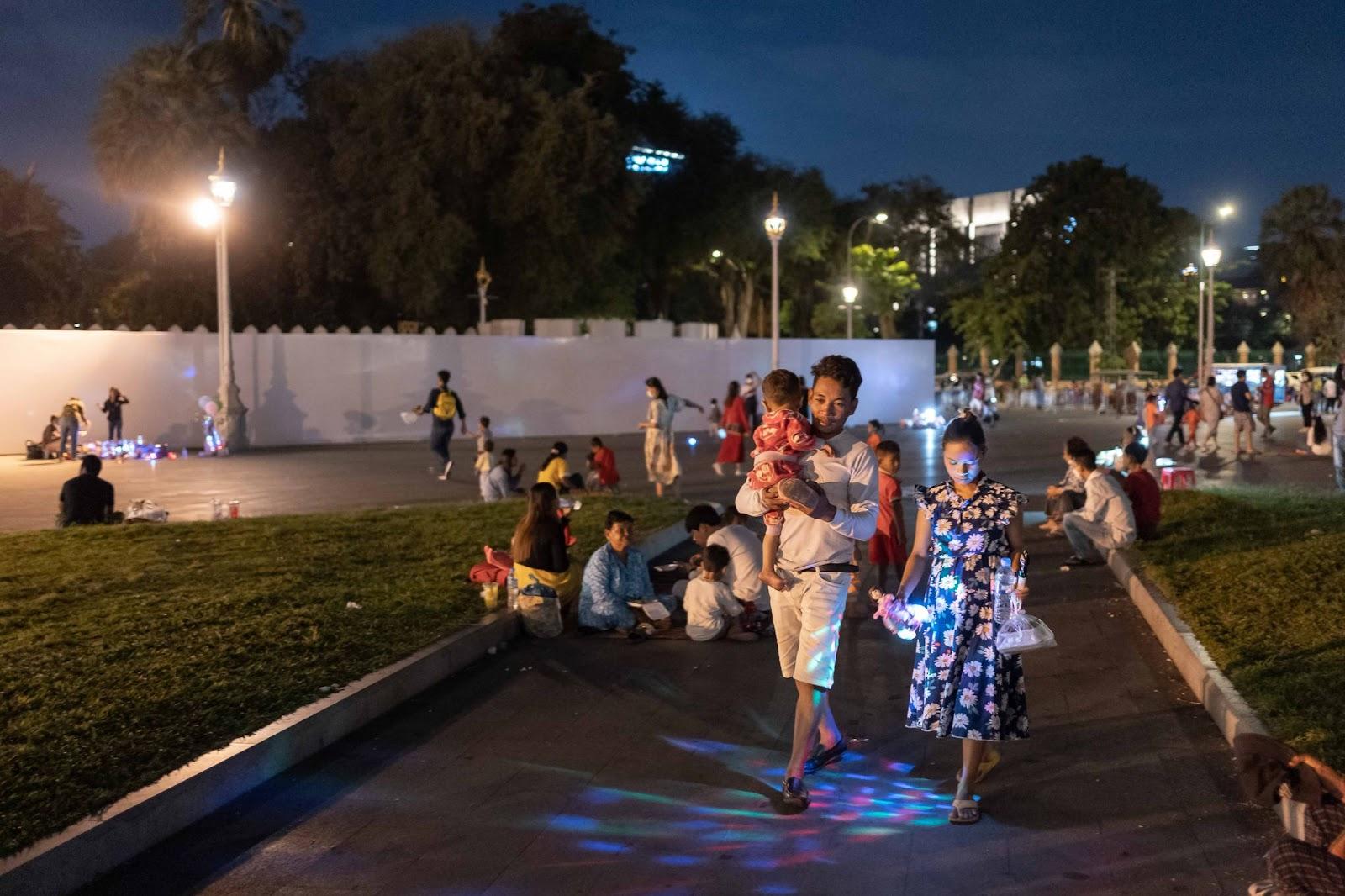 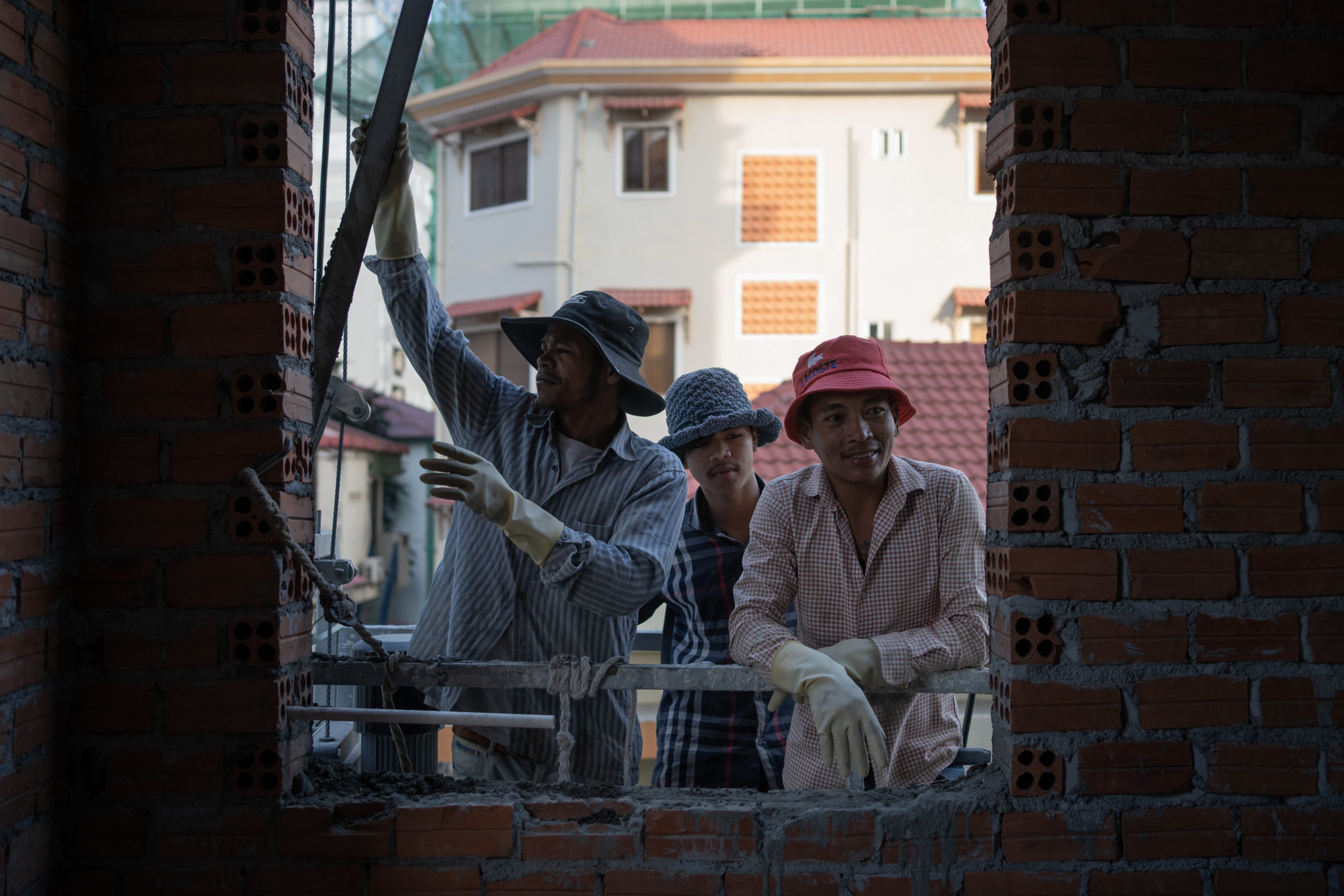 Behind the Scaffolding. By Andy Ball, Vutha Srey and Gerald Flynn. Images by Andy Ball. A collaboration with New Naratif. April 6, 2022.