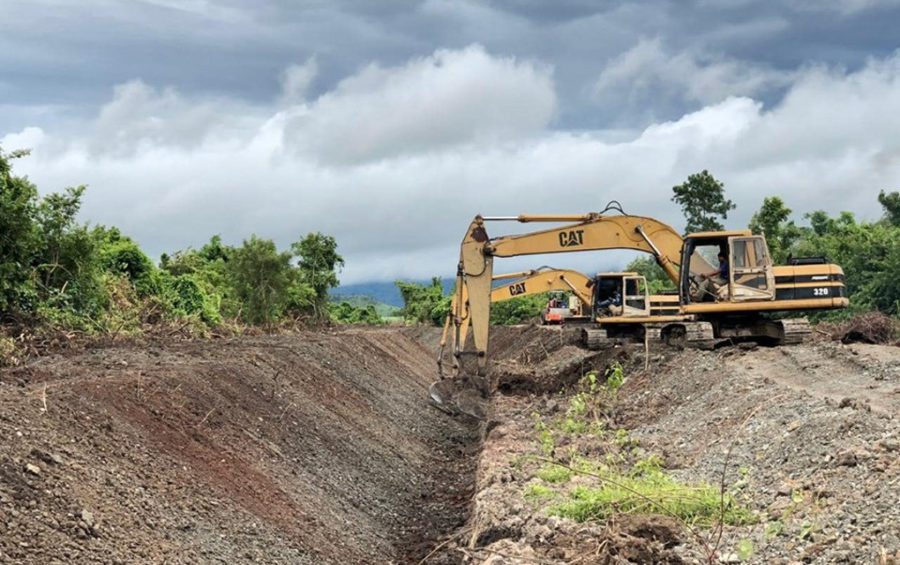 Excavators dig an irrigation channel in Kampong Speu province, in a photo posted to the Water Resources Ministry’s Facebook page on October 24, 2019.

The 48-year old farmer anxiously awaits every rainfall in Cambodia’s northwest. “I worry about the water and my livelihood every day,” Vann En said. Growing sweet cucumbers in Banteay Meanchey, his income depends on there being enough water — but he said he had already seen signs of an upcoming water shortage around his area. “There is only little water in the river,” En said.

With this observation, he is not alone. Water levels have rapidly dropped on the Mekong River to as low as half of the long-term average, raising fears of water shortages in the upcoming dry season all over the country. Dry season typically starts around November to December.

Water Resources Ministry spokesman Chan Yutha said that despite the flooding of recent months, the water had come quickly and the peak was short-lived. “We find that once the water starts to subside, it recedes quickly,” Yutha said.

Ministry data shows the Mekong dropped to a depth of 5.1 meters in Kampong Cham on Tuesday, 2.5 meters lower than the same day last year and 5.4 meters below the average since 1991. The daily fluctuation varied between two and 19 centimeters.

In Phnom Penh, the Chaktomuk monitoring station recorded the Mekong at 4.5 meters, 2.1 meters below last year and 4.1 meters lower than the average.

Water levels have also fallen to below 1998 levels, when a record-setting drought caused widespread food shortages.

To the east of En’s Beanteay Meanchey home, 52-year-old rice farmer Bun Kimla faces similar issues in Siem Reap. She said she feared a repeat of last year, when a severe dry season caused widespread droughts, bringing about poor harvests. “In my place I don’t have any water at all,” Kimla said.

And fields are likely to dry up even further over the next few weeks. According to forecasts, the Mekong will drop another meter ahead of the Water Festival on November 10-12 to 3.5 meters, Yutha said.

Coalition of Cambodian Fishers director Long Sochet said the Tonle Sap was about 0.8 meters lower than last year based on measurements in Pursat province. This was not only cause of concern for farmers and their crops, but could also mean a decline in fish stock in an already sensitive water ecosystem. “There will be a lack of fish in the dry season coming up,” Sochet said.

To make sure farmers and fishers weren’t facing the same hardships as before, the government had to step up, said Yong Kim Eng, president of the People Center for Development and Peace. Yet, that had not happened enough, he said. “I have little hope in the authorities’ actions, because we’ve seen ponds and artificial lakes [built], but we still face water shortages in the dry season,” Kim Eng said.

But Yutha, from the Water Resources Ministry, said his ministry was prepared. His officers had managed to capture water into reservoirs before it began to recede, he said, and there would be enough to grow dry-season rice at a similar level to previous years. “Today, all of our pools around the country have enough water,” he said.

According to the National Committee for Disaster Management, about 20,000 hectares of rice fields in 13 provinces were affected by drought in November last year.

Ban Chantha is part of the Newsroom Cambodia training program.

Hotel Guards Out of Quarantine as ‘Draconian’ Covid-19 Law Advances

After a Single Covid-19 Case, Factory Workers in Dangkao Work in Fear

Hotel Guards Out of Quarantine as ‘Draconian’ Covid-19 Law Advances

After a Single Covid-19 Case, Factory Workers in Dangkao Work in Fear