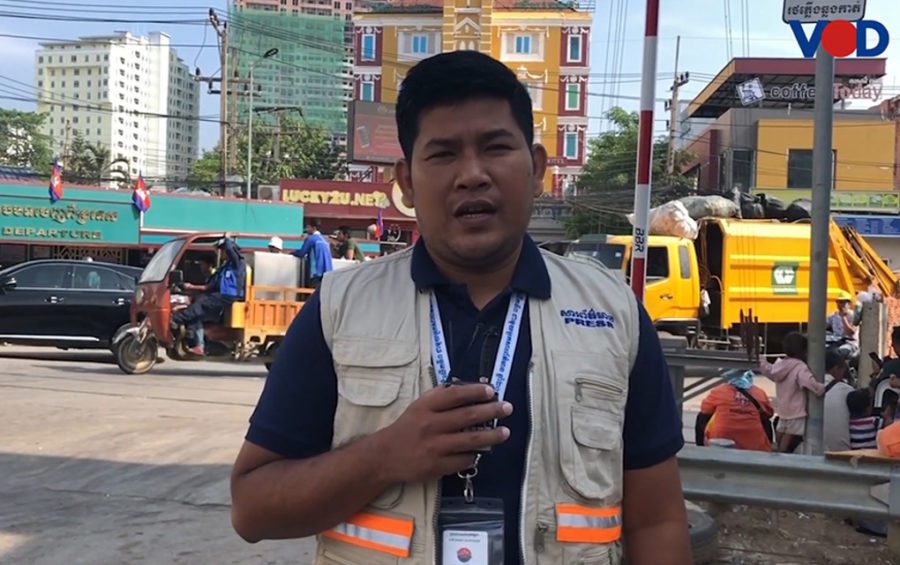 Two VOD journalists were detained for three hours at the Poipet military police headquarters on Saturday after reporting on border security in the area.

CNRP acting president Sam Rainsy had vowed to attempt a return to Cambodia via Thailand that day, leading to the deployment of armed forces to the Thai border as well as dozens of arrests of CNRP supporters in the lead up.

Rainsy only got as far as Kuala Lumpur on November 9.

VOD reporter Vann Vichar said he and cameraman Chorn Chanren were detained by military police from about 3 to 6 p.m.

Officers went through all his equipment, including communications on his phone between him and his wife, Vichar said.

“After detaining me for about half an hour, they separated me from Chanren. They brought me to a room to question me and check my laptop and smartphone, going through all messages, group conversations and files,” he said.

“They listened to voice chats. After questioning, they wrote reports to send to their superiors. I don’t know how high it went,” Vichar added.

Ninaro, the military police commander, told Khmer Times that his officers had suspected the two journalists of being “involved” with Rainsy’s supporters.

“We just called them for questioning and then allowed them to go back,” Ninaro said.

In a statement on Sunday, the Cambodian Journalists Alliance, whose co-founders include VOD editors, said the journalists had at the time been interviewing fish sellers frustrated at being unable to cross the border.

The association’s executive director, May Titthara, added that the detentions amounted to a threat.

“The government and authorities must guarantee the rights of journalists by allowing them to report the news without fear,” Titthara said.

Cambodian Center for Human Rights coordinator Vann Sophath, who was also at the Poipet border at the time to monitor the situation, said journalists have the right to cover events happening in public places.

“Freedom of the press in Cambodia is not yet being broadly respected to an international standard,” Sophath said.

In recent years, Cambodia has steadily declined in Reporters Without Borders’ World Press Freedom Index, falling from 137th worldwide in 2017 to 142nd last year and 143rd this year.