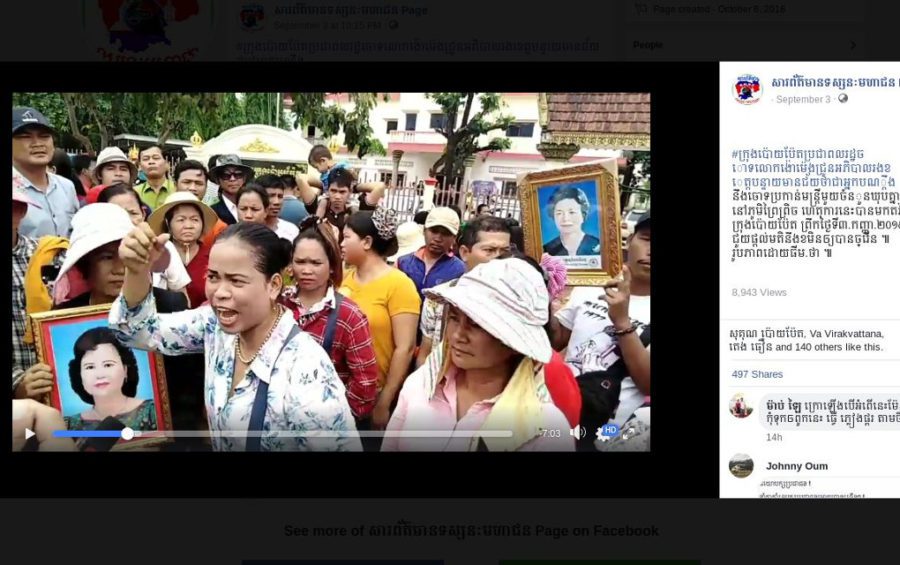 More than 300 villagers in Banteay Meanchey province’s Poipet City protested in front of the provincial capital’s city hall for three days this week over a land dispute in which protesters say existing land title documents were collected by authorities but never returned.

Demonstrators representing nearly 1,000 families in Poipet commune also questioned the “bad people” behind competing claims to 103 hectares of disputed land, which a protester said meant they had to restart the titling process.

Chuob Theary, a villager from Prey Prich village in Poipet, told VOD that 589 families lived on the 103 hectares in the area since 1994.

But in 2003, 34 unidentified families who were not from their community laid claim to the land, citing a land title from 1998, according to Theary.

In 2004, the government issued a notice to authorities to divide the land among the 589 families, she said. Some villagers had already gone through legal procedures and their claims were recognized by commune and city authorities.

Last year, Theary said, local authorities told villagers that in order to process their land titles following a new, systematic procedure, officials needed to collect original copies of titles from those villagers who had already received them. Since then, authorities have not returned the titles, she said.

Then, earlier this month, officials announced that they could not issue land titles for any of the families because some among the 34 competing families had filed appeals.

“Why do the bad people want to make Samdech [Prime Minister Hun Sen] lose votes and restart [the titling process] again since people are already living in this area?” Theary said.

Another villager Chan Sambath, who faces losing two plots of land, said now there were nearly 1,000 families living on the disputed land. Some villagers had sold their plots from one person to another, and some had built homes on the land, Sambath said.

Authorities were trying to hide information about the 34 families from outside their community who were making claims on the land, he claimed.

“We cannot give up the protest because we have been working hard for 10 to 20 years to get a piece of land. And the land is not empty, there are houses on it. If we drop the protest, where will we go?” Sambath told VOD.

“It is not right to hand over the land for hundreds of families to one or two people because we had the right from titles from all the authorities,” he added.

Banteay Meanchey provincial governor Um Reatrey said authorities were trying to find a compromise that was acceptable for both groups claiming the land, but he declined to identify anyone from the group of 34 families.

In Kongchet, provincial coordinator for rights group Licadho, said according to the 2001 Land Law and other land regulations, the nearly 1,000 families could legally gain ownership because they had lived in the area for years.

The Land Law says individuals living on land for at least five years makes them eligible for a land title, if the possession was peaceful and uncontested.

“If we look into how they occupied the land, it has to be their legal property. According to the Land Law, they should have gotten land titles,” Kongchet said.

But since the 34 families made claims, authorities have not offered titles to the other 963 families in the area claiming land, according to Kongchet.

“The city and Banteay Meanchey provincial authorities should look and investigate, and ask for approval from the national level to find a solution by giving them land titles,” he said.

Latest news
Illegal Confinement, Torture Trial Over Online-Gaming Business Dispute
May 27, 6:38 pm
Negotiations Go Nowhere as NagaWorld Holdouts Down to 181
May 27, 6:31 pm
‘Wolf’ Attacks Villagers, Gets Eaten
May 27, 4:07 pm
Inside an Opposition Councilor’s Five Years as Commune Deputy
May 27, 2:14 pm
In Dam-Divided Srekor, Opposition Candidate Eyes Return With Lofty Plans
May 27, 10:14 am