Poipet’s Border Casino Workers Are Out of Work, Out of Options 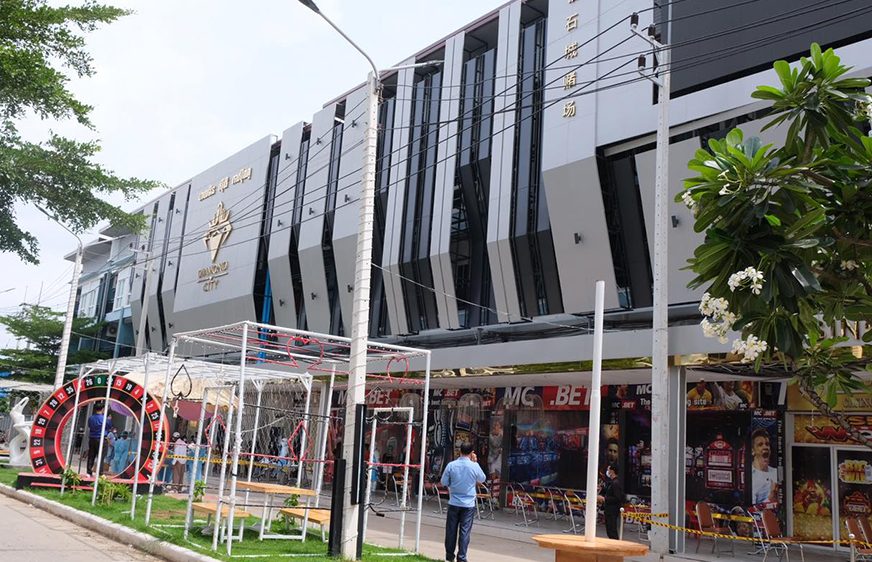 Authorities blocked sidewalk in front of Poipet’s Diamond City Casino after it closed due to Covid-19 in a photo posted to the Banteay Meanchey provincial police Facebook page on April 27, 2021.

Leng Sreyneth, 25, says she doesn’t know if she’s capable of doing much more than serving food and drinks at a casino.

Her knowledge is limited, she says, and anyway, with Covid-19 there are few opportunities.

Poipet city’s casino industry, on the border with Thailand, has been hit hard by the pandemic. All casinos there were shuttered in late April as they became Covid-19 hotspots, and it’s been more than three months of scraping by for many of the thousands of casino workers who found themselves out of work.

Sreyneth says there’s a stigma attached to those Poipet casino workers. “When we leave and we go somewhere else, they won’t hire us easily, because they are afraid we will infect them,” she says.

Choeum Dat, a cashier at the Golden Planet Casino, says he gave up waiting for the industry to reopen late last month.

The 27-year-old returned to his hometown in Siem Reap province carrying a $6,000 debt. He says he doesn’t have a big plot of land to farm or raise livestock, and he has no idea what kind of new job he can find to do.

“Now, at home, we are watching over our mother — she’s sick. And we are taking some time to plant crops at home, do household chores, raise chickens and so on. We have not yet thought of where to go to find a job because Covid is infecting many people,” Dat says.

Bun Sothy, provincial coordinator for the Collective Union of Movement of Workers, estimates that 90 percent of a 20,000-strong workforce lost their jobs. A few remain working secretly at casinos illegally operating online, he says.

The industry generally does not receive the attention that other major sectors like garments manufacturing do, he says.

“On the factory side, it’s a bit better that they still have jobs, though they face challenges. But the casinos are completely closed. It has been closed for nearly two years and without charitable help from the government or from the employers. None at all, even $10, $20. They live and depend on their own fates. Some return home to rice fields, some just live for survival from day to day. So it’s very difficult,” Sothy says.

Labor rights group Central’s director, Moeun Tola, agrees that casino workers — as well as entertainment workers and those in informal sectors — have been left out of government safety nets amid the pandemic, in contrast to tourism and garment workers.

“As a suggestion, I think, this state’s social aid program should respond to every corner, meaning not forgetting any group that was affected by the Covid-19 crisis,” Tola says.

Officials say the reopening of casinos simply depends on the health situation.

Poipet deputy governor says community infections have been dropping, but the border city continues to be at risk of imported cases from Thailand.

Nhean Phirun, a supervisor at the Grand Diamond casino, says he’s been out of work for three months now, leaving him without the income to pay for debts and daily expenses.

Phirun says he planned to return to his hometown in Battambang province to farm, but recent restrictions on travel and unfavorable weather have made him decide to try to wait for the industry to reopen.

“The boss called to say: Don’t worry! Wait until many clients return,” the 35-year-old says. “But I still don’t see what the day, the month will be.”