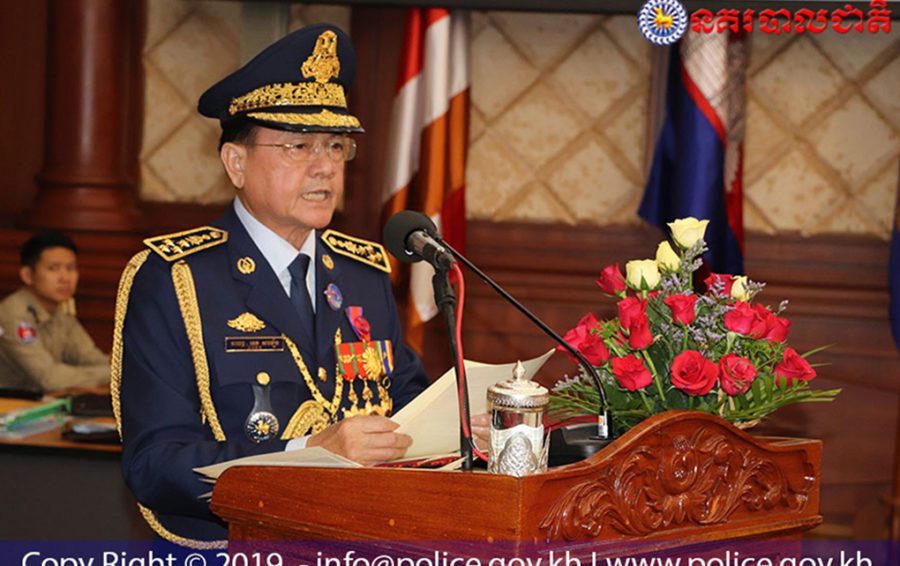 National Police Chief Neth Savoeun has added to ongoing government rhetoric raising fears of popular uprisings by announcing on Thursday that Cambodia was under threat from revolutionary movements and calling for police to stay alert.

In a speech to mark 74 years since the founding of the National Police, Savoeun told police that some foreign powers and popular movements were trying to topple Prime Minister Hun Sen’s government and threatened the country’s security.

“[We] are strongly against color revolutionary attempts to overthrow the legitimate government,” Savoeun said, calling for police to stamp out any rebel groups.

“To prevent domestic tensions, promote harmony, strengthen national security, to make the nation strong, [we will] not allow any enemy forces to use Cambodian territory as a means to oppose neighboring countries,” he said.

The government’s tirades against alleged foreign meddling have typically been directed at the U.S. in recent years, as Cambodia increasingly leans into China’s growing largess. Opposition leader Kem Sokha remains under house arrest in Phnom Penh for allegedly trying to launch a U.S.-backed ouster of Hun Sen.

However, former opposition leader Sam Rainsy has also attempted to draw attention to other alleged foreign meddling in Cambodian by asking the U.N. to investigate the rumored construction of a Chinese naval base at the Union Development Group’s tourist mega resort in Koh Kong province.

“The building of a foreign military base on Cambodian territory is a violation of the 1991 Paris Peace Accords and it is threat to peace and security in the whole of Southeast Asia,” Rainsy said in a Facebook post on Tuesday.

Hun Sen’s government has denied the claims that China is building such a military base in Cambodia — a move that would be unconstitutional — and claimed that only the Western powers have tried to interfere in Cambodia’s internal affairs.

The European Union’s Everything But Arms (EBA) duty-free trade scheme is being reviewed due to concerns over Cambodia’s dismantling of the political opposition and turn away from democracy. The U.S. has also threatened to cut Cambodia’s tariff-free access to its markets unless the government reverses course soon.

Kim Sok, a prominent political analyst who fled abroad upon his release from prison last year, said he believed that the government might be making a mistake by ignoring foreign pressure to reverse the oppression of the last few years.

He said oppression was not an effective way to quell social unease. It was better, he said, to restore democracy and foster a culture of national reconciliation.

“If Hun Sen still resists listening to the recommendations of the international community, and will not listen to the will of the Cambodian people who want a return to democracy, I think Hun Sen will become an enemy of the people’s anger all over the country,” Sok said, calling for Hun Sen to respond to the pressure.

“A bad result will be seen within three years of Cambodia losing the EBA.”