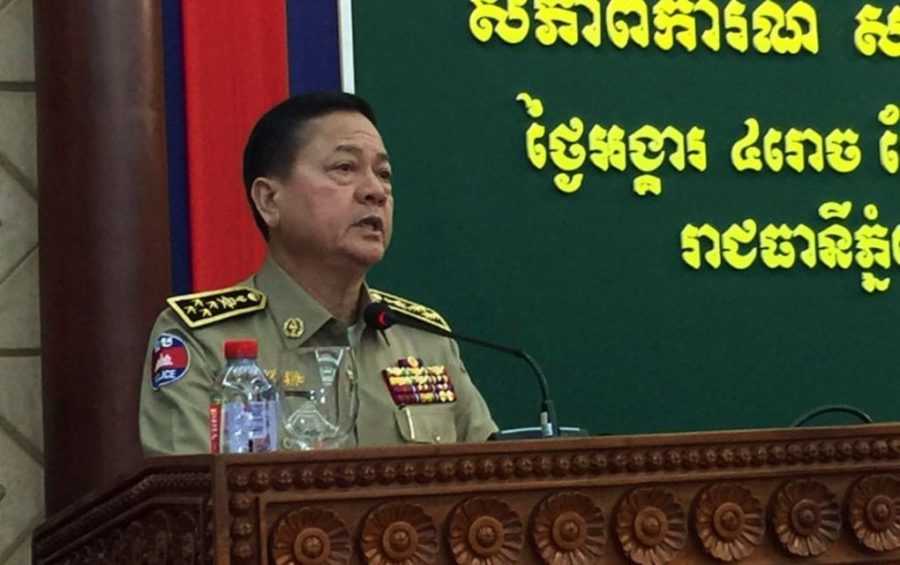 National Police spokesman Chhay Kim Khoeun speaks to reporters after a meeting with police officers on September 17, 2019 at the Interior Ministry in Phnom Penh. (Vann Vichar/VOD)

National Police Commissioner Neth Savoeun on Tuesday ordered police chiefs from across the country to be ready to prevent any attempt by the political opposition to overthrow the government, and maintain security on the upcoming Pchum Ben Day, a police spokesman said.

In a two-hour, closed-door meeting with police chiefs from every province and other law enforcement officers, Savoeun focused on reinforcing officers’ commitment and raising morale, strengthening security for Pchum Ben Day on September 28 and preparing forces to crack down on a “rebel group,” a reference to the outlawed opposition Cambodia National Rescue Party (CNRP), said spokesman Chhay Kim Khoeun.

Kim Khoeun said the meeting was in response to recent political developments in the country, and claimed that supporting exiled opposition leader Sam Rainsy was illegal.

More than 150 former members of the CNRP have been questioned by police or the courts, and at least 26 have been arrested this year, often in connection to their support for the pledged return of Rainsy in November, according to human rights groups.

The CNRP was dissolved by the Supreme Court at the government’s request in 2017, following the arrest of party president Kem Sokha on charges of attempting to overthrow the government with foreign backing, which he denies. Sokha remains under de facto house arrest in Phnom Penh.

Rainsy, who has lived abroad since 2015 to avoid a slew of court convictions, which he dismisses as politically motivated, has vowed to return to the country on November 9 to “take back” the country from Prime Minister Hun Sen, who has led Cambodia for 34 years.

On Sunday, the CNRP released a statement detailing their plans for the return of Rainsy and other senior CNRP leaders to Cambodia, including announcing the dissolved party’s decisions to have party officials head to the region on November 5, prepare a fund to support defecting armed forces, and appeal to migrant workers to join them when they attempt to enter the country.

Hun Sen has said authorities will be waiting to arrest Rainsy upon his purported return.

Meanwhile, Interior Minister Sar Kheng has allegedly ordered local authorities to visit pagodas during Pchum Ben to monitor CNRP supporters, after he supposedly got word that the opposition would use the festival period to organize an alleged plot against the government, according to a voice recording purportedly of Kheng that was circulated online over the weekend.

Kim Khoeun, the police spokesman, said on Tuesday that the meeting was meant to share information with all police officers about the “tricks, activities and intentions of the rebel group.”

“To support the convict Sam Rainsy is to violate the law. So we will implement the law,” he added.

Reporters were allowed in at the end of the meeting, and Savoeun, the commissioner, reminded officers of the importance of maintaining security to keep the peace.

“We are committed to not allow any group — any traitor group — to destroy the happiness and peace in Cambodia,” Savoeun said.

However, Mong Hay did not believe Rainsy would actually return to the country as scheduled.

In the past, Rainsy has repeatedly promised to return to Cambodia, but later canceled his plans.