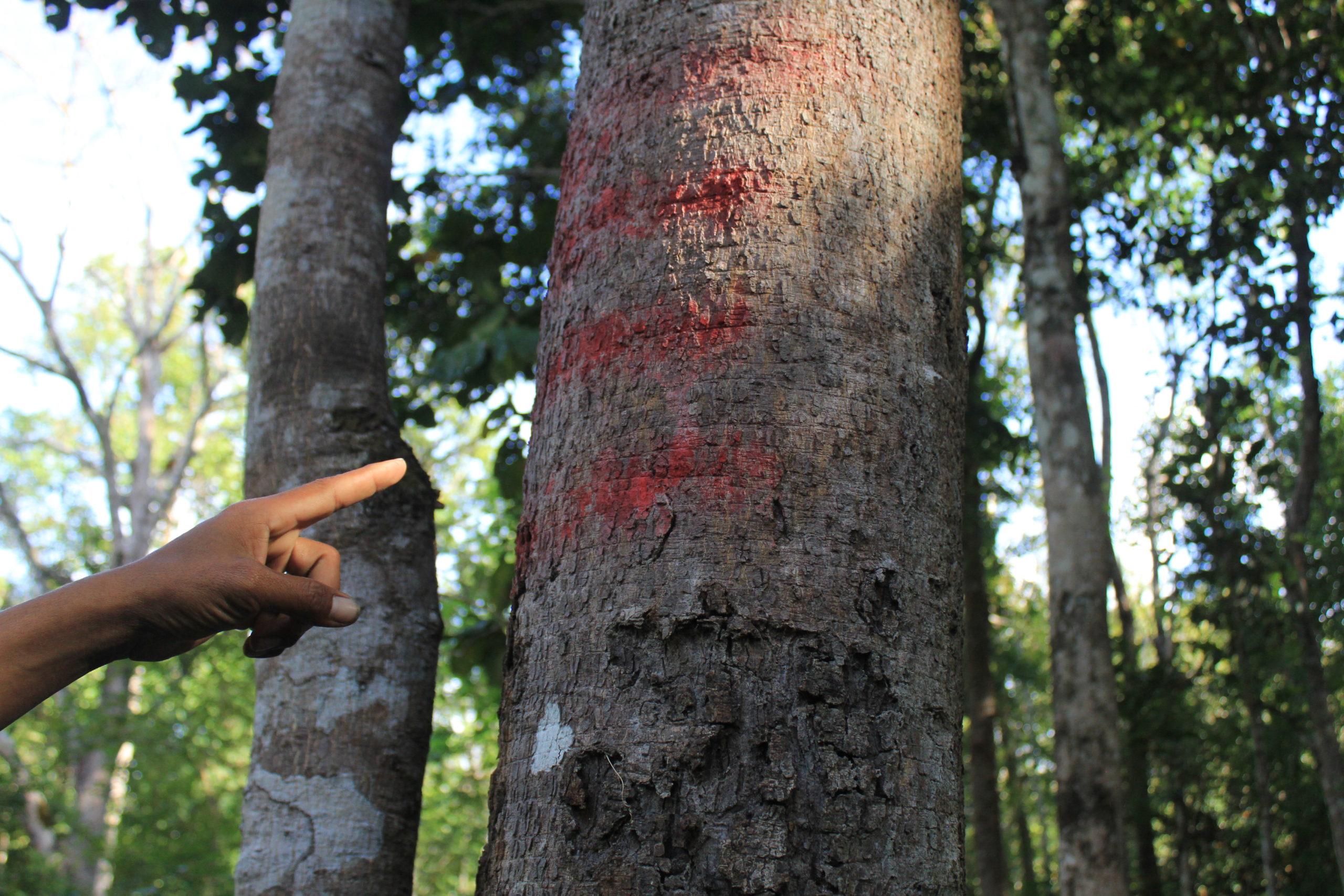 Sok Ly, a Pou Meas villager protesting the clearance of forest by members of Brigade 70, points to markings on a tree that soldiers intend to cut down in the Metta Forest. (Andrew Haffner/VOD)

Local police claimed soldiers were on holiday, not shooting at patrollers in a Kampong Speu community forest, as residents allege they were again targeted by soldiers last week.

Nov Norn, Trapaing Chor commune police chief in Oral district, acknowledged victims’ accounts that they had been shot at inside the “Metta” community forest last week, but downplayed the incident.

Though residents said it was soldiers who had shot at them, Norn said he had been told the area’s soldiers were on holiday.

“We asked the superiors in relation to the soldiers. We were not involved, and will let the inspection team investigate because this case is related to the military court,” he said. “It was not soldiers. It was just shooting to threaten, and shots to break the trailers’ tires. There were no injuries in the shooting.”

The forest has been mired in dispute since it was given to the military last year, taking away a community asset that local residents say they have worked to protect for decades. Among the forest’s defenders is a monk who has been living in the woods for years, and who was also allegedly shot at by soldiers last month.

Resident Khoeun Kea said six soldiers shot at him and his brother on April 11, destroyed their trailer, and beat his brother. He filed a police complaint two days later that the incident amounted to an attempt on their lives. But he had yet to be questioned for any further information, he said.

“I asked the relevant authorities to investigate and arrest the perpetrators to punish them under the law because this was an act of manslaughter,” Kea said.

Norn, the commune police chief, however, said the violence had been merely a conflict between individuals, and it was hired workers — not soldiers ­— who fired guns.

Oral district police chief Buth Buntheoun hung up after a reporter introduced himself.

Khorn Sarith, another local resident, said it was not an isolated incident. Soldiers had also fired at him when he and other community members protested against them clearing the forest in the past, Sarith said.

There have now been several incidents of shooting and violence, including some injuries. But police have not responded, he said.

“Soldiers have done whatever they want, and legal action has not been taken,” Sarith said.

Ten community representatives are instead facing court prosecution over their protests, residents said.

“We see that Cambodians who are affected by land or other rights violations are suffering worse and worse because there is a culture of impunity for law enforcement officials, especially the armed forces.”