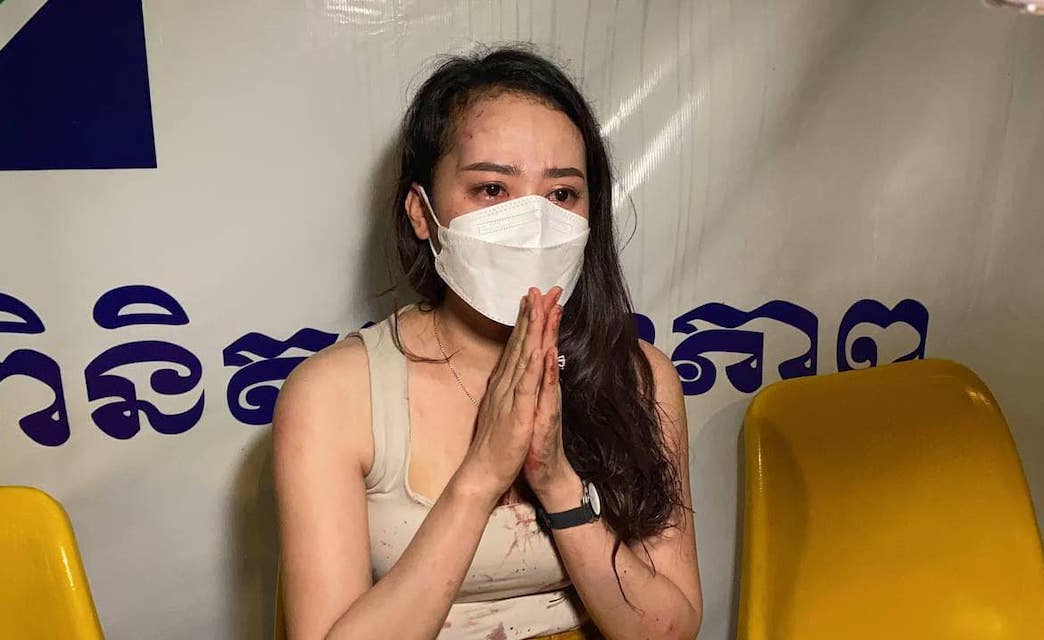 Ngorn Srey Nich who was hit on the head by a police officer in a photo posted to the Phnom Penh Municipal Police’s Facebook page.

A woman who was struck in the head by a police officer while escaping a traffic stop has asked for justice and compensation.

Ngorn Srey Nich was struck in the head by police officer Mat Pisey on Wednesday night while riding a motorbike with her brother without wearing helmets. Phnom Penh Municipal Police said Pisey was arrested and sent to court, but Srey Nich demanded more justice.

“I admit that I was against the traffic [law] without a helmet, but he should not take [a walkie-talkie] to beat me like that. I can only rely on high-ranking officials to find justice for me,” Srey Nich said.

“I just ask for something to be done that is appropriate to my honor. First, I was a woman, and [the police] beat me in public, my head was bleeding. [Secondly], I need some compensation for me to be treated, because sometimes the head does not hurt today, but in two to three years, we don’t know. So I have to demand some compensation and have to do something appropriate to my honor as a woman.”

But drivers who violate the law and drive away from authorities will also face legal action, he said.

“In short, both are wrong. The driver escaping from the authorities is also against the law, while he went out to block [them] in a risky way, so it was against law enforcement and beyond law enforcement,” he said.

“Last night we received an order from the leadership to detain that officer,” Sokseyha added.

The arrest came after a social media outcry over a video of the incident.

Sokseyha said on Friday that Pisey had been sent to court.

Pa Chanroeun, head of the Cambodian Institute of Democracy, agreed that both sides were wrong.

“So the solution is that whatever law they violated, they have to be punished accordingly by that law.”