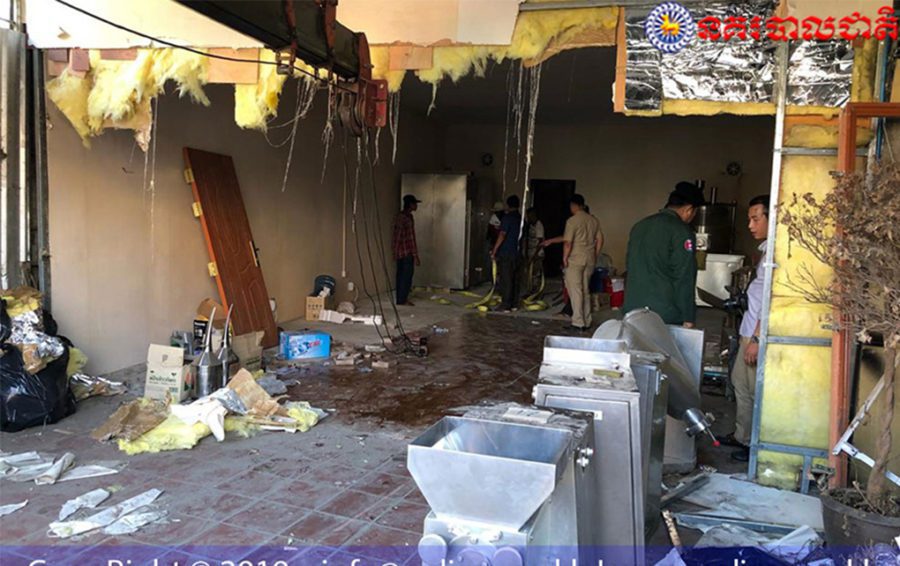 Police are searching for a team of Taiwanese criminals they say are behind a large drug operation in Phnom Penh raided this week, according to an official.

Phnom Penh Municipal Police raided a rental property in Sen Sok district on Tuesday and seized nine machines as well as 173 kg of chemicals they say were used in the final stages of producing drugs including methamphetamine and ketamine.

The lab was operated by a team of Taiwanese drug producers, according to Deputy National Police Chief Mok Chito, but they all escaped before the raid. Chito said the owner of the property had tipped off police about the operation after growing suspicious about the manner in which the tenants used the house.

“They were Taiwanese. In general, drug criminals always want to use Cambodia as a place for drug production but subsequently there has been a crackdown against their tricks,” Chito said, adding the raided drug lab was not overly sophisticated and appeared to have been used only for the final stages of drug production.

Cambodia’s police have been increasingly focused on drug crimes over the past two years. After primarily targeting drug users and small-time street dealers, authorities say that they have this year shifted focus to larger-scale operations.

Chito said 4,399 people had been arrested for drug crimes in the first three months of 2019. The figure included 104 foreigners and 372 women, he said.

In February, the popular Rock Entertainment Center in Phnom Penh, owned by Cambodian Chamber of Commerce president Kith Meng’s brother Kith Theang, was raided. About 50 kg of drugs were seized, according to police, and dozens of patrons were detained. Theang was later charged and sent to pre-trial detention.

(This article was translated from the original in Khmer.)