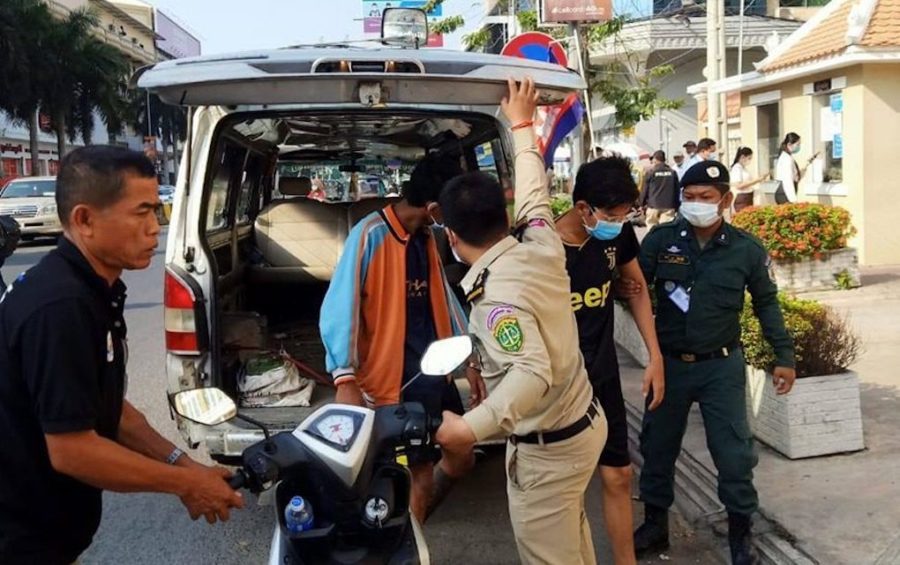 Two youths who were filmed smacking an unidentified foreign cyclist on the back of the head while they drove a motorbike past him were sent to the Phnom Penh Municipal Court on Wednesday to set an example for other wayward youth, a police official said.

One of the two youthful-looking slappers, whose ages were not confirmed by VOD, hit the man while he was riding a bicycle along a road on the Tonle Sap riverside on Sunday at about 5 p.m., according to Phnom Penh municipal police spokesperson San Sokseyha and seen in a video shared online.

In the video, set to upbeat dance music, the pair then drives off on the motorbike. The man does not appear to be hurt.

The youths shared the recording of the slap attack on TikTok, and authorities arrested them on Tuesday after identifying the motorbike’s license plate.

Police officers “followed the police chief’s order to warn some of the other troublemakers who are always causing problems because sometimes [they] just make an apology and are released,” Sokseyha said on Wednesday.

“In this case, we are only doing this as a warning and to follow the legal procedure so that some children can look at it or have some people respect the law so that they do not joke around about it,” he added.

Authorities had not identified the foreign man as of Wednesday, Sokseyha said.

Social development researcher Pa Chanroeun said that according to the video clip he saw on social media, the two youths had done something morally wrong, but authorities should show leniency and educate them rather than press criminal charges.

“If they have never had a criminal record before, if we punish them too harshly, it will ruin the youths’ reputations and futures,” Chanroeun said.

“The young people can realize, can change, instead of imprisonment,” he said. “I think it’s too serious for them.”