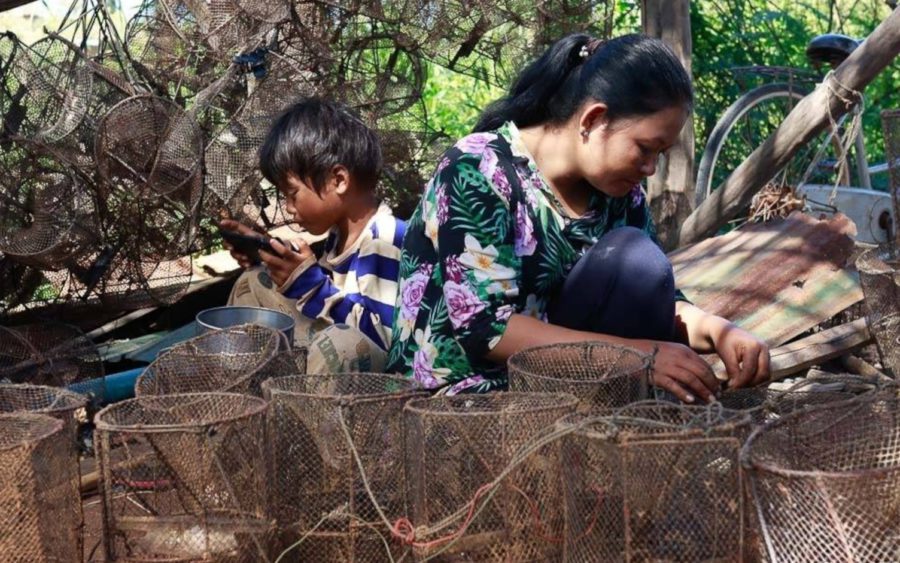 Sisters Van Nakry and Pach Sela say police officers inspecting their family fishing pond disappeared into the forest for half an hour before returning with a battery and electric fishing prod that wasn’t theirs.

A local police chief said the family’s claims of false evidence, pressure during interrogations and political motivations were exaggerations and fabrications. However, family members insisted in interviews that the arrest of Chhil — as well as his 15-year-old son for the same fisheries charge — was suspicious.

The arrest happened on April 12, when six family members — including two boys — went to their fish farm in neighboring Kanhchor commune to harvest their catch.

Family members say they pumped water out of the pond then scooped up the fish with nets, about 20 kg in five sacks.

Police, however, allege they used electric shocks to kill the fish before collecting them.

Three officers arrived at the pond around 2:30 p.m. that day, saying they were tipped off by residents, and conducted a search of the fish farm. The pond is about 40 km from the Tonle Sap lake and near a small river.

The family denied the gear was theirs, but the officers arrested Chhil and his son, and “they photographed my husband on a boat with the electric equipment and battery,” Nakry said. They also took two sacks of fish as they led the suspects away.

When family members arrived at the district police station, they were told their fish had already been eaten, Nakry said.

She alleged that police and other officials pressured her husband to admit to using electric shocks in their pond, including threatening them that they would confiscate more of their property if he failed to confess.

“They said my husband was a troublesome person,” Nakry added, also alleging that local officials had previously pressured them over being part of an opposition party. “Why have they arrested my husband and son unjustly? If we murder people or they see us using electricity to catch, we will be satisfied with it. But they could not find it at our pond — where did they get it, and they put it [on us] and the name on it wasn’t ours. … What they’ve done has crossed the line.”

Chhil’s sister-in-law Sela said the family was being treated differently than others — even when other fishers were caught using electric shocks to catch fish, they were not jailed. She added that the arrested 15-year-old had known nothing.

“When they catch [people using] electricity, they reach a compromise [and send them] home, they would not send them to prison like this,” Sela said. “We don’t know where they got the evidence from.”

Rights group Licadho’s Pursat coordinator Mit Samourn said she had interviewed six people claiming the battery and electrical equipment were not the family’s. She noted it was unusual that the case was not handled by Kanhchor police — where the pond is located — but Sya police instead, where Chhil lived and stood as a commune candidate.

“Through our questioning of witnesses that went to the area, there was no evidence to prove it. … The authorities collected evidence from other areas.”

Defense lawyer Sam Sokong said Chhil and his 15-year-old son had been charged under the Fisheries Law. He questioned the prosecution of fishing on private property that was not a protected area. “I consider that this is more of a political threat than law enforcement,” Sokong said.

Sya commune police chief Him Kolap, however, denied the accusations.

“All that they are saying is exaggeration, that the authorities brought things from other places to inculpate them,” Kolap said. “They all used electricity.”

The equipment was not found at their pond “because they hid it under straw in a rice field,” he said.

Police have also investigated others, but had not found evidence in many previous cases, he said. “This had nothing to do with the party. Do not think it is because it’s the Candlelight Party — it is a crime.”

Kolap added that all use of illegal fishing gear — no matter where — was a crime.

“There is no excuse that it is in a private area. Anywhere that is Cambodian territory, crimes will be investigated and [perpetrators] will be arrested. Even fish we keep in a container at home, if we use this equipment to shock them, we are guilty under Article 98. If we use a net, we are OK.”

Article 98 lays out prison sentences of three to five years for using electrocution, explosives of poison in “fishery domains.”