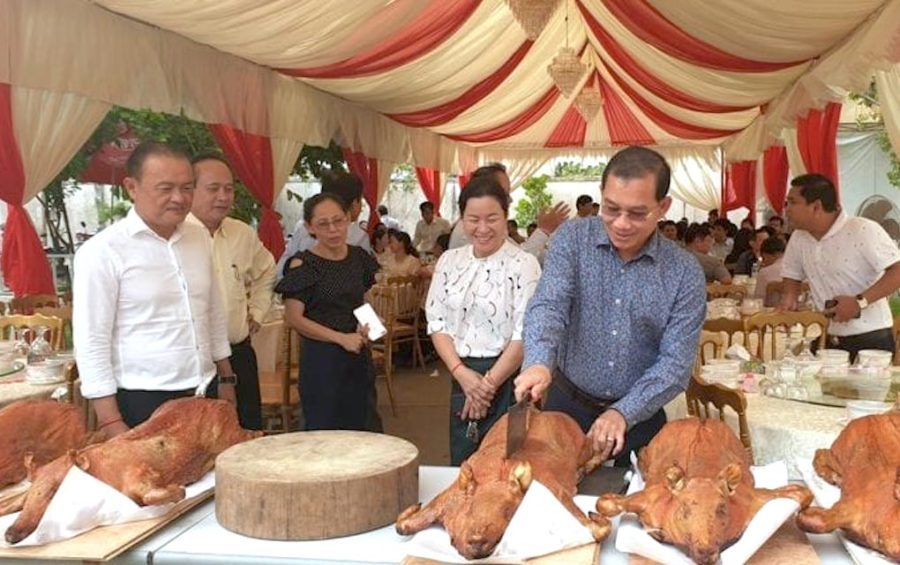 Civil servants are stuffing themselves with pork in a public relations blitz intended to shore up and sow confidence in Cambodian meat amid outbreaks of African swine fever that have killed thousands of pigs.

The Siem Reap provincial government laid out a feast of pork two weeks ago for civil servants to devour, and splattered photos across social media. The Agriculture Ministry in Phnom Penh followed suit on Wednesday, serving up a buffet of roast pigs for its officers in an attempt to relieve the public of its fears of the virus. Further “Safe Pork-Eating” events were held over the weekend.

Pork sales were down to as low as a fifth of normal rates in the wake of 13 documented outbreaks of African swine fever in five provinces since March, according to a local farmers association.

The disease has devastated the pork industry in neighboring Vietnam this year, causing almost 4 million pigs to die or be culled.

Tan Phannara, director of the Agriculture Ministry’s animal health and production department, has said the disease spread to Cambodia across the border from Vietnam. He also noted in July that Cambodian soldiers had been allowing pigs to be smuggled across the border, although the pigs tested negative for the disease.

The highly contagious virus is almost always lethal for pigs but is harmless to people.

Last month, Hun Sen made a public appeal for people to keep eating pork, claiming that meat sold in the country’s markets had all been properly inspected.

Since, various government departments have been touting their fill of pork across social media.

On Sunday, the Agriculture Ministry’s animal health department held a Safe Pork-Eating event in Phnom Penh’s Chbar Ampov district attended by department director Phannara as well as officers from the department in the capital and Kandal province, according to Srun Pov, president of the Cambodian Livestock Raisers Association.

“There are more and more activities, and I am happy,” Pov said. “I want this kind of event to keep going until people believe it doesn’t infect people.”

When contacted by VOD to inquire about the campaign, Phannara, the department director, hung up the phone. Srey Vuthy, the ministry’s spokesman, did not respond.

Still, Pov said the sale of pork was slowly ticking up again since a low last month.

“Before, we sold only 20 percent, and now it has increased up to 50 percent,” Pov said, adding that pork and pig prices also remained depressed.

Theng Savoeun, director of the Coalition of Cambodia Farmer Community, said the display of civil servants eating pork failed to address people’s lack of confidence in the country’s inspection of foodstuffs.

“The authorities in the past have tended to protect their own interests rather than providing a solution for people,” Savoeun said.

Stronger action was needed to prevent the spread of African swine fever and protect the local industry, he said.

More than 3,600 pigs have died or been culled in Cambodia due to the disease so far, according to the World Organisation for Animal Health, with outbreaks recorded in the provinces of Kandal, Ratanakiri, Svay Rieng, Takeo and Tbong Khmum.