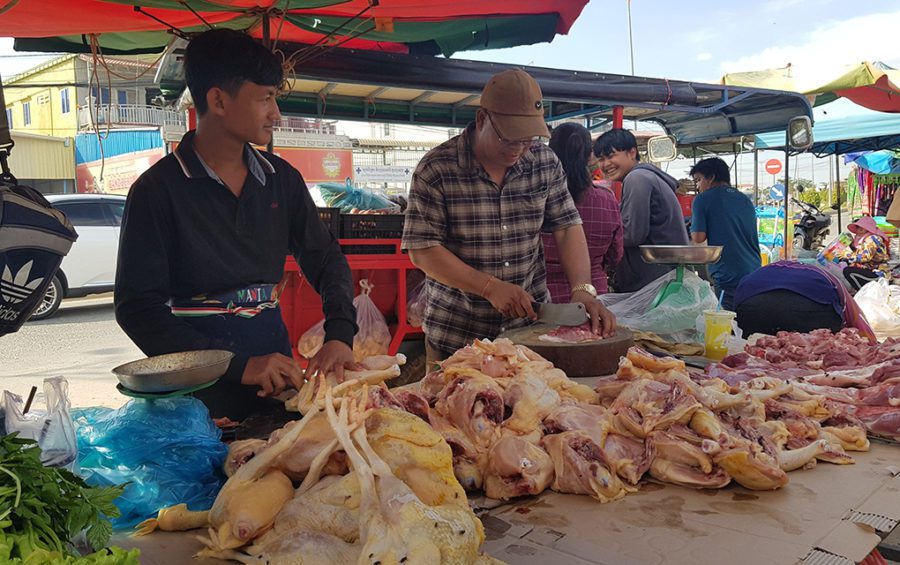 More than 1,000 African Swine Fever outbreaks across the border in Vietnam last year have kept up the pressure on pork prices here, as over 5,000 pigs died or were also culled in Cambodia in 2020 due to the disease.

African Swine Fever, a highly contagious viral disease that is almost always lethal for pigs but harmless for people, broke out in Vietnam in 2019, leading to almost 6 million pigs dying or being culled in 2019. More than 43,000 more pigs died or were culled in the first eight months of last year amid 1,008 more outbreaks there, according to a U.S. Foreign Agricultural Service update in September.

Tan Pannara, animal health director at the Agriculture Ministry, said 5,000 to 6,000 pigs also died or were culled in Cambodia last year due to African Swine Fever, as cases returned across the border in Vietnam.

“This is the reason why Vietnam still lacks pigs, and it’s required to import them from Thailand,” Pannara said, emphasizing that the disease was under control in Cambodia.

Thousands of pigs also died or were culled in Cambodia in 2019.

According to the National Bank’s latest consumer price statistics, the price of fresh pork was up 15.1 percent in September compared to a year earlier.

Srun Pov, president of the Cambodian Livestock Raisers Association, said weekly surveys with members showed that pig prices continued to edge higher, from about 12,000 to 13,500 riel per kg (about $3 to $3.38) in the past two months.

Vietnam had been hit hard by African Swine Fever since April, causing prices to jump there, Pov said. “It’s increased because of that,” he said.

In Phnom Penh, workers said they had noticed the rise in pork prices, and were cutting back on consumption.

Outside the Y&W Garment in Dangkao district, worker Chon Savien carried groceries she had bought at stalls set up outside the factory.

She said she had $1 of chicken wings, $0.50 of pig blood and $1 of cockles for dinner with her husband and small child.

Another worker, Ven Eyhong, 24, said fish seemed to be relatively affordable at the moment.

“But there’s less work now at the factory. If the prices of meat and vegetables stay high, we don’t know how our future will be,” Eyhong said.

“It sells less,” Pheap said, noting sales were down to half on some days.

The World Food Programme’s latest food price update for September and October says flooding in October caused a substantial rise in vegetable prices, with morning glory prices increasing 73.5 percent during the two months according to its survey of markets.

It shows pork prices remained elevated during 2020 after a rise at the end of 2019.

Nevertheless, the report says markets appear to be functioning well, and any impact on food security “is more likely to come from the demand side, with many households suffering economically with a loss of livelihoods and income as a result of the crisis, which in turn restricts their ability to afford a sufficient and diverse basket of nutritious foods.”