Power-Abusing Governments Should Not Rule, Mahathir Says in Phnom Penh 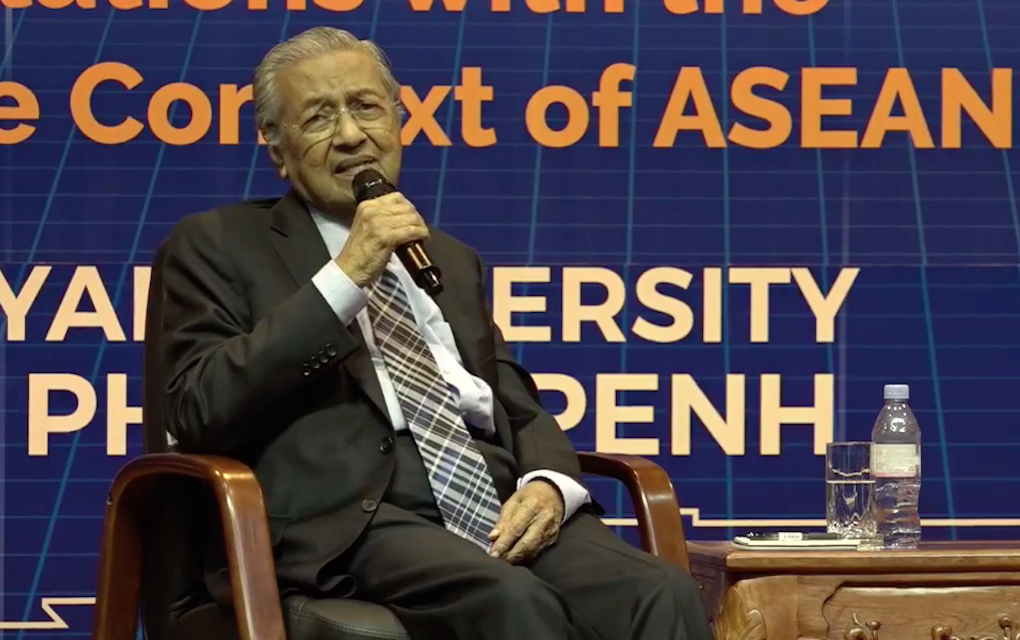 Malaysian Prime Minister Mahathir Mohamad told a packed room of Cambodian university students in Phnom Penh that governments that abuse their power and fail to serve the public don’t deserve to rule — which was why his party won an election last year.

During a wide-ranging talk at the Royal University of Phnom Penh on Monday, in which Mahathir took questions from students and others in the audience, he said governments should help their people prosper, reduce unemployment and create new industries to promote development.

“Once you do that the people will continue to support you. The moment you forget and you abuse the power that you have, they will throw you out. And that’s what happened to the last government of Malaysia,” said Mahathir, who at 94 is the oldest world leader.

Mahathir returned to office last year as an opposition candidate for Pakatan Harapan, unseating incumbent Prime Minister Najib Razak and his Barisan Nasional party. It was the first electoral loss for Barisan Nasional in Malaysia’s history after six decades in power, including two decades under Mahathir’s leadership.

“The people supported that party as the government for 61 years. But when they went astray, when they forgot their duties to the public, they were thrown out by the public. That is the way things should be,” Mahathir said.

“Because when you have a government that doesn’t care for the people it shouldn’t be allowed to continue,” he added.

The lecture, billed as an open dialogue on “Balancing Relations with the Superpowers in the Context of Asean,” was peppered with Mahathir’s views on geopolitical tensions in the region, diplomacy, public service, living a healthy life, multiculturalism and same-sex marriage, which he opposes and described as something Asian nations should avoid.

The premier highlighted his “Asian values” or “Look East” philosophy, while dishing out both compliments and jabs to the U.S. and China over their trade war, military maneuvering and foreign direct investment in the region.

On the South China Sea dispute between China and the U.S., Mahathir said that although China claimed the sea, it must guarantee freedom of navigation, which would benefit it and other nations, ensuring access to the world’s markets.

However, China had a right to feel threatened by U.S. naval exercises in the region, he said.

How would the U.S. feel, he quipped, if China’s navy were to sail near New York?

The prime minister also said the “silly” ongoing trade war between China and the U.S. was a waste of time and money, and “not constructive” as tit-for-tat tariffs did not benefit the nations’ economies.

Mahathir recommended Asean nations come together to determine industrial policy “so we can produce our needs largely by ourselves.”

He said Asean was a grouping of weak nations that was stronger when they stuck together.

After taking office, Mahathir criticized China’s huge investment plans in Malaysia, which he says have not been in the Malaysian people’s interests and have been to China’s advantage in bilateral relations.

On Monday, Mahathir was asked about his government’s cancellation of major infrastructure projects that were part of China’s Belt and Road Initiative.

Mahathir said his former party lost the 2018 election, in part, because it took on too much debt and the people “saw the country going the wrong way.”

He said his decision to cancel the projects was not an anti-China measure, but because Malaysia could not afford the debt.

The best solution, he added, was to discuss the concerns with China civilly, and slow down development, reduce the debt and save money for Malaysia.

Foreign direct investment had to be controlled and should create jobs and economic opportunities for local people, he said.

In response to a question from a student who asked whether Asian nations should “democratize their country” based on an American or Western model, or their country’s situation, Mahathir said it was fine to replicate the West, depending on what you were copying.

“Today, because of easy communication, you can see what’s happening in other countries. Sometimes you copy them, which is OK if the things are good,” he said.

“I think [Western] systems of government and democracy, for example, is very good. We should copy that,” Mahathir said.

“But when they decided that men should marry men, you have to follow that? Women marry women — you know what would happen if you adopt that culture? There’ll be only one generation. Because neither the men who marries men can have a child, nor the woman who marries a woman can have a child,” said the prime minister, espousing a common albeit illogical homophobic view.

Mahathir went on to highlight how Malaysia valued multiculturalism, suggesting that welcoming racial and religious minorities was good, as long as migration was controlled.

“Being multicultural is positive if the numbers [of migrants] are not too big,” he said.

Mahathir concludes a three-day visit to Cambodia on Wednesday.