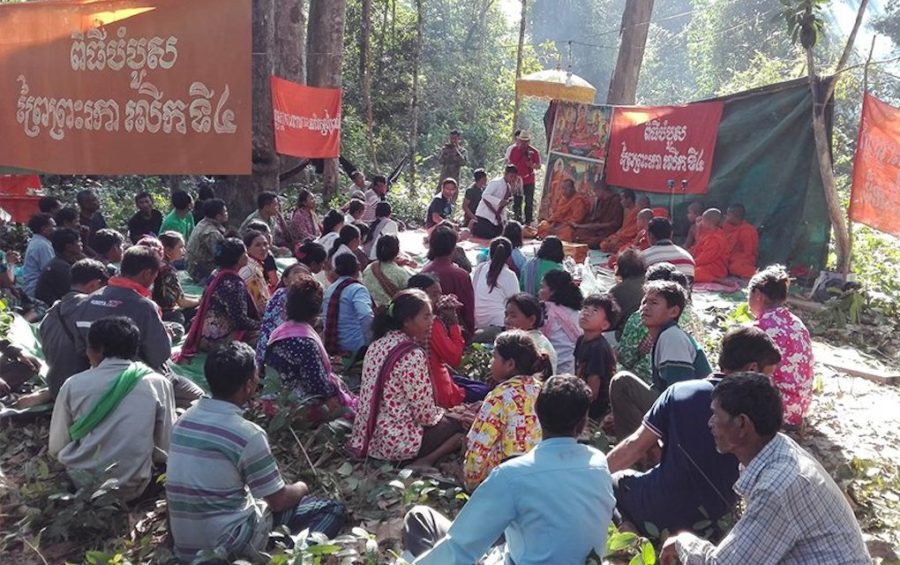 Forestry defenders in Preah Vihear province gathered over the weekend to protect, plant and pray for endangered trees species — and curse those that would do them harm.

Keo Pich, a member of Prey Preah Roka Forest Community Network, said some 300 people, including members of the network, civil society and authorities, gathered in a conservation area of Chheb district’s M’lou Prey I commune to bless rare trees and plant seven new ones.

But Pich said only 11 of about 20 trees that had been blessed in the area in the past three years remained, while the others had been cut down by illegal loggers.

“The situation of Preah Roka Forest then and now is quite different. It’s almost gone,” Pich said. “If you look at the Koki tree, they’re almost gone, only small ones are left. Those with a diameter of 80 centimeters wide were all cut.”

During the blessing ceremony, participants prayed to sacred spirits to help protect five newly-planted Chheuteal trees and two Tbiek trees, as well as the forests and people in the region, according to Pich.

He said that they also put a curse on illegal loggers.

“The trees that were blessed the first time, [people] cut them, but those who cut them got into accidents,” Pich claimed. “It caused trouble to the loggers. Their trailer got overturned when they delivered the timber and caused harm to those who did it.”

Prey Preah Roka National Park, which was established in 2016, is located in three districts, including Chheb, Choam Khsant and Tbeng Meanchey in Preah Vihear province, and spans more than 90,300 hectares.