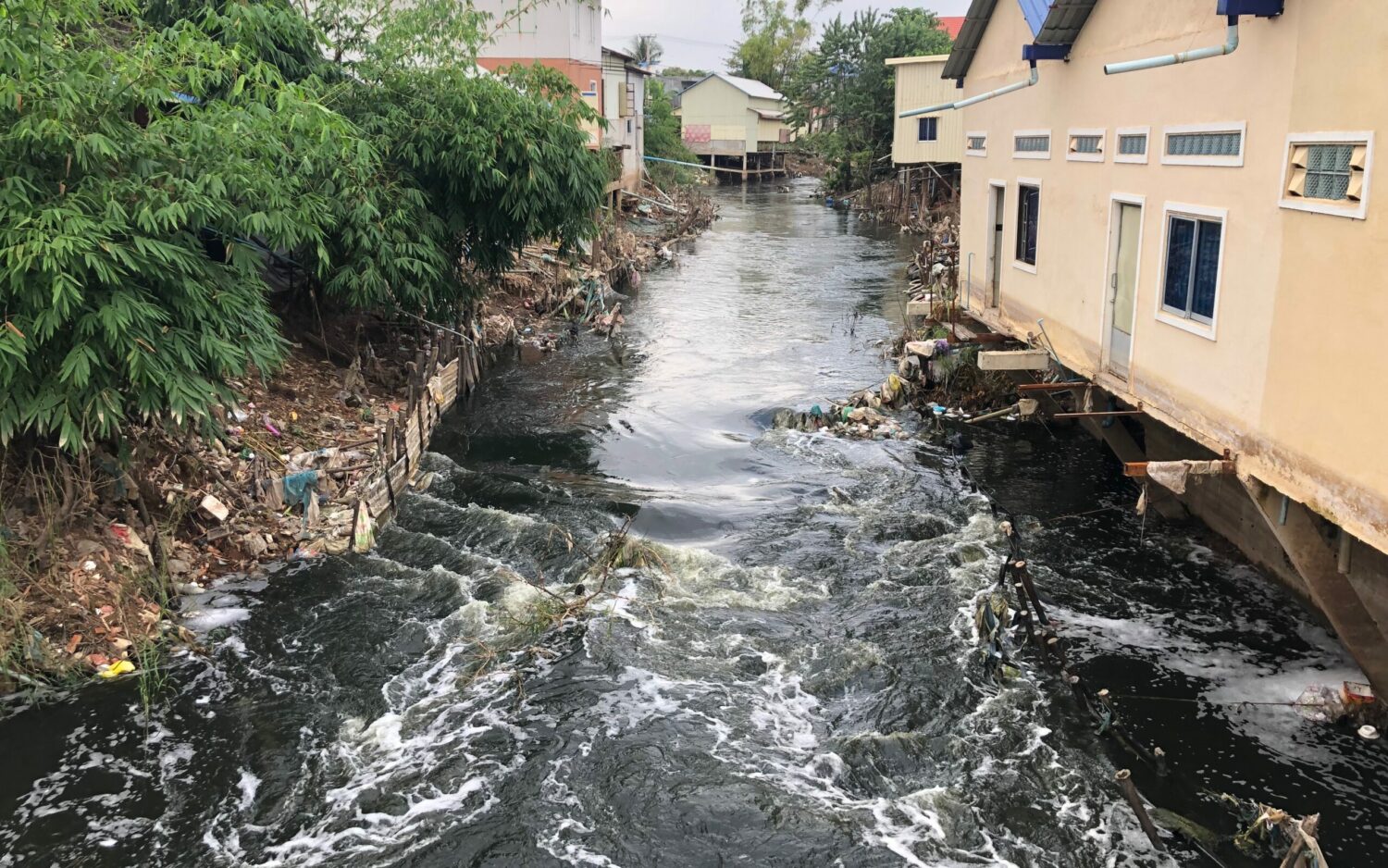 Prek Tnaut river flows under a bridge in Steung Chrov village on Nov. 17, 2022, where residents say pollution has increased noticeably over the past month. (Fiona Kelliher/VOD)

Seang Chanthea, 38, can’t sleep at night. The smell of pollution from the Prek Tnaut river below her stilted home is so strong she feels nauseous lying in bed.

Those living near the river, which flows from Kampong Speu through Kandal province, say that they have long avoided using its water for drinking, cooking or cleaning as the area has become increasingly polluted over the last decade. Every rainy season, they also brace for flooding that led to the recent collapse of the riverbank near where Prek Tnaut meets the Bassac river.

But even for a community used to such stressors, last month brought a new low: In October, the water running through several villages southwest of Takhmao city turned an oily black color residents had never seen before and began to smell so bad they felt dizzy and nauseous in their homes.

“The quality of the river water is getting worse — it’s smellier, and getting darker between last month and now,” said Chanthea, who sells trinkets, toiletries and beverages from her storefront home in Prek Lpov village in Takhmao’s Doeum Mean commune. “It’s hard for people like me whose house is right next to the river. It’s hard to breathe, especially at night when I find it really hard to sleep due to this terrible smell.”

Last week, the Ministry of Environment said that Prek Tnaut’s water near Takhmao was “hazardous” and told residents not to use it for bathing or drinking.

Phin Rady, director of the water quality management department of the Ministry of Environment, said that provincial Kandal environment authorities alerted the ministry of deteriorating water quality earlier this month and said they will send an inspection team next week to evaluate.

Based off its location, Rady said the ministry suspects the Takhmao water quality has declined because of increased runoff from garment and shoe factories in Kandal province, waste from the households living around the river and the filling-in and development of two Phnom Penh lakes — Boeng Tompun and Choeung Ek — which are connected to Prek Tnaut via several canals.

The ministry is “concerned” about the situation, Rady said, but claimed they have no funds for a water purification system in the area.

Doeum Mean commune residents said they had received no information or visits from local authorities or the ministry alerting them to the river’s hazardous status. But they independently said they believe the recent pollution is the product of water arriving from Phnom Penh lakes, which have been increasingly filled in for development in recent years and raised concerns of flooding and contamination around the metro area.

Before 10 years ago, the river was clean enough to use for daily cooking and drinking, said 43-year-old farmer Sem Chanthorn, who lives across the water in Stoeng Chrov village. Her family uses a motorized irrigation system to pull the water into their 1-hectare plot next to the home, where they grow cabbage, papaya and tamarind to sell at the local Takhmao city market.

The pollution has become so bad this year that she always wears a mask when running the irrigation system twice a day or she feels ill from the smell, which sticks to her body and clothes.

Chanthorn regularly hears neighbors living closer to the water complain about not being able to sleep, along with other oddities they attribute to chemical pollution, such as roofs that have suddenly rusted in the past month.

“I would stop using it (for irrigation) if it kept getting more polluted,” said Chanthorn, but added she has few options aside from digging wells. “I’ll keep thinking about it.”

Not everyone can afford to stop using the water for daily life. To the northeast, near where a few fishing boats sat overturned along the riverbank, a group of 13 people sat under the Takhmao bridge where they have been living for the past two years on open mattresses and under makeshift tents.

Kea Samnang, 19, said that his family relies on river water for bathing, washing their clothes and cleaning dishes. But when the pollution gets really bad, like last month, they switch to using purified water, paying about 5,000 riel or $1.25 for several 20-liter jugs they stretch out over the course of a few days.

The family isn’t too concerned about the pollution, he said. “Nobody from the Ministry has said anything.”