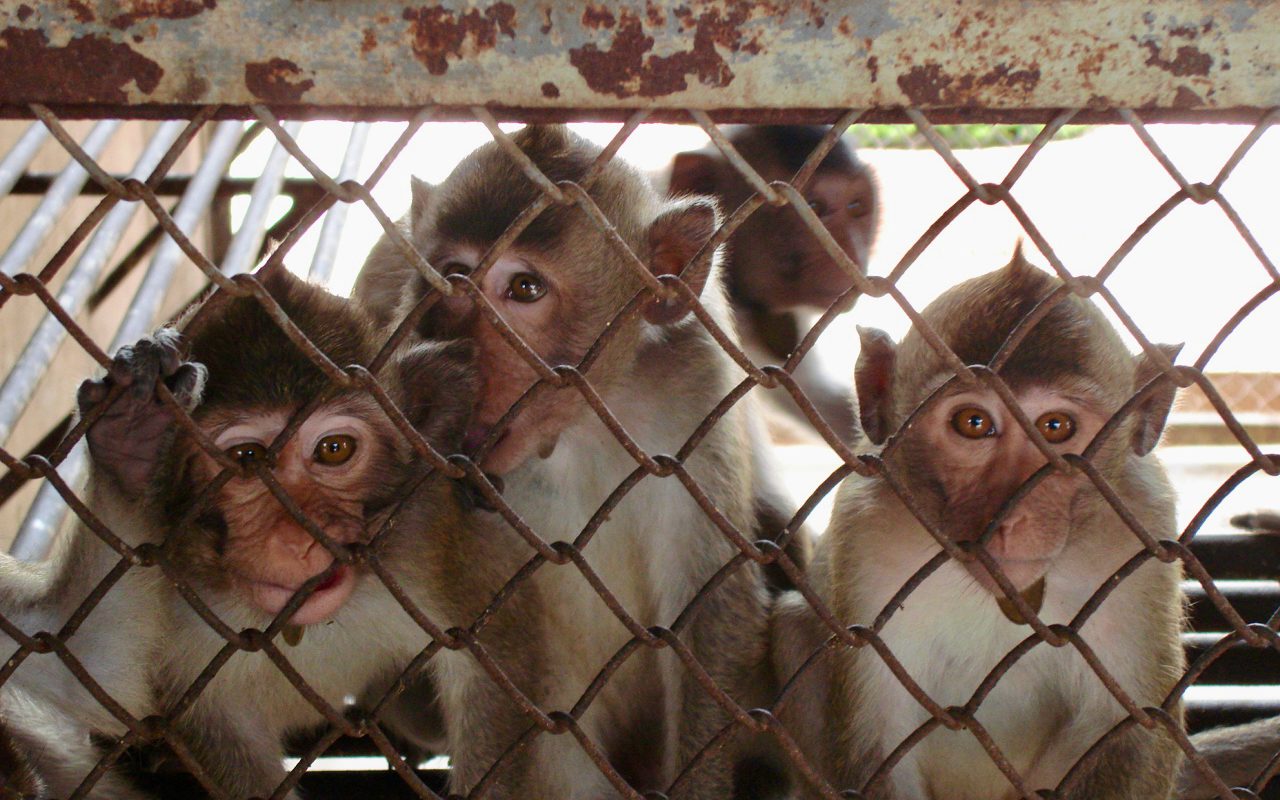 Cambodia has recently come under fire over its monkey exports, with a U.S. federal court indictment alleging thousands of wild monkeys were smuggled to America with false certifications claiming they were captive-bred.

An Agriculture Ministry official was arrested in New York last month over the case, and the head of the Forestry Administration, Keo Omaliss, has also been charged for conspiracy and wildlife smuggling.

Keo Bunny, a member of the Prey Lang Community Network, a group working to protect the wildlife sanctuary, said he was part of a patrol from December 12-15 that found trees cut down in a manner used by monkey poachers to set up traps.

“They cut the surrounding forest and set up a net, then climb [the remaining trees] to chase the monkeys out,” Bunny said.

The poachers work in groups of around 10 to surround and trap the monkeys, he said.

Bunny, from Stung Treng province’s Thala Barivat district, said poachers sought two types of monkeys, which sold for up to $250 per animal.

Lay Phally, another member of the Prey Lang Community Network, said patrollers had also seen nets set up around the felled trees.

“If these incidents continue to happen, I’m worried. I’m worried about the monkeys’ extinction, first of all. Secondly, we may lose the forest,” he said.

Nevertheless, he would ask his officers to inspect the locations found by the community, he said. “We have not seen any information from them. If they inform us, I will prepare the forces,” Phirong said.

Community patrollers have been banned from inspecting protected areas and some environmentalists arrested for investigating illegal logging.

The Cambodian Youth Network’s head of research and advocacy, Heng Kimhong, called for residents and activists to be allowed to freely participate in protecting the forests and their wildlife.

According to a 2014 official Cambodian document submitted for Cites international certification, the country had set up six monkey breeding sites using 37,800 wild monkeys legally captured between 2003-2009, but monkey-hunting was then made illegal from 2010.

The U.S. indictment alleges that wild long-tailed macaques, used in medical and other laboratories in the U.S. and elsewhere, continued to be captured from the wild because the breeding farms could not raise monkeys fast enough to satisfy the market.

American importer Inotiv said last week that its supply from Cambodia had stopped since the indictment, but the Cambodian Agriculture Ministry later said that it had not imposed any ban on exports. American laboratory monkey supplier Charles River’s stocks reportedly rose following the ministry’s statement.

Inotiv said in an email on Friday that it was seeking clarification.

“Inotiv recognizes that this matter is fluid and is evolving in real-time. We are directly and independently seeking confirmation from the Cambodian government and our major supplier of their current position on non-human primate (NHP) exportation. We look forward to sharing that information once received,” it said.