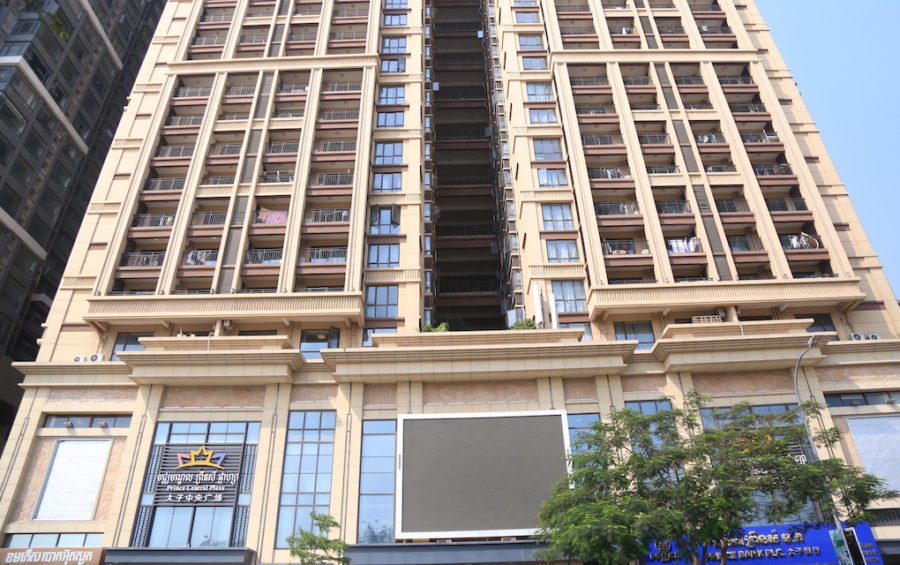 The Prince Central Plaza condominium complex in Phnom Penh was ordered locked down again late Sunday, and a second tenant was announced as having tested positive, just two days after it was reopened for all but one floor after a nearly monthlong Covid-19 quarantine.

The government again locked down the 36-floor building in Chamkarmon district because a fourth test of a resident of floor 28B was positive for Covid-19, according to a property management notice dated Sunday and seen by VOD late the same day. The patient first tested positive and was hospitalized on February 21, and then tested negative three times and was discharged from hospital on March 7, the notice said.

Later on Monday evening, Prince Central Plaza management sent a notice again reopening all floors except the previously locked down floor 33B and a single unit on floor 28B, the residence of the most recently announced Covid-19 case in the building.

Two Prince Central Plaza tenants who requested anonymity said the Sunday night notice was the first time they were told that people in the building were tested for Covid-19 on February 21, and that more than one resident had tested positive in the building since February 20, when the ongoing Covid-19 outbreak was first reported and their building lockdown began.

Paul said the Prince complex had once again been sealed off after the tenant was found to be positive with Covid-19.

The resident, who has not been outside the building since February 20, said the situation inside was “normal” but tenants, many of whom were from outside the country, felt stressed and wanted to leave Cambodia.

“Tenants said they cannot stay because the condo keeps closing down and Cambodia has a lot more Covid-19 cases and they don’t want to stay. They have no comfort where they’re staying so they will go,” Paul told VOD.

“Some already booked plane tickets and have to go back to China [within a week] but cannot leave [the building],” he added.

Prince property management had earlier informed residents in a March 9 notice that a second round of samples gathered in the building, on the day prior, had resulted in “one confirmed case.” The notice said the testing results had been delivered by the Health Ministry.

A March 12 notice says the “one confirmed case detected during the second test on March 8” was a tenant on the 33rd floor.

Floor 33B, where the previously announced Covid-19 patient resided, remained under guarded quarantine as of Monday afternoon, according to a tenant. Meanwhile, Paul, the other resident, said the 28th floor was not closed off, but building management had asked residents to be more vigilant and take precautions.

After some 27 days in mandatory Covid-19 lockdown, about 800 people were told they could leave the Prince building late Friday night.

Before that announcement, four tenants had spoken to VOD about life inside lockdown, with some expressing frustrations over vague communication about testing, when they would be released, why some floors were locked down, and whether more than one person has tested positive in the building.

Ngy Mean Heng, director of the Phnom Penh health department, could not be immediately reached on Monday, but told VOD on Saturday that the government made lockdown decisions based on the “precautionary principle.”

Health Ministry spokesperson Or Vandine, City Hall spokesperson Met Measpheakdey and a representative of Prince Real Estate Group also could not be reached. The company has not responded to emailed questions as of Monday evening.

But in the notice shared with residents late Sunday, Prince Central Plaza’s property management said it “regrets to inform that because a resident of [floor 28B] tested positive during their fourth test, the government immediately locked down the Central Plaza building again as of tonight (March 21).” VOD is withholding the Covid-19 patient’s specific condo unit number.

“The resident … was confirmed positive and brought to the hospital on February 21. The resident’s previous three tests were all negative, and the government allowed the resident to be released from the hospital from March 7 until today,” the notice adds.

“According to government requirements the resident went to the hospital for their fourth test yesterday (March 20). Unfortunately, the resident’s test this time was positive. The … resident’s test returning positive has directly caused the Central Plaza to be suddenly placed under lockdown by the government,” it says.

The notice says tenants should “wear masks, disinfect with alcohol, maintain social distance, and minimize unnecessary contact with crowds and going out.”

“[A]ny purchases can be delivered,” it adds. “Cooperate with management and help one another overcome the difficulties together!”

On Friday, Paul told VOD that some people had already returned to the building after recovering from Covid-19, but others had not returned and instead stayed outside to wait for the building to reopen.

He also said he had been tested for the first time on February 21. Other residents said they were first tested on February 23.

After the latest building notice was shared late Sunday, George*, another resident who requested his real name not be used due to fear of reprisals, said he had not known building residents were tested as early as February 21. On Friday, he said he was first tested on February 23.

George had told VOD that the property management had announced one positive case the day after he gave a sample for the second time, on March 8.

“That’s the only concrete information that was ever shared with us about the testing,” George said on Friday. “They said one confirmed case has been detected on March 9.”

*Residents of the Prince Central Plaza requested anonymity due to fear of reprisals. Pseudonyms have been used.

Note: A freelance journalist who co-reported this article requested their real name not be used due to fear of reprisals.

Updated at 7:28 p.m. with notice again reopening the building.