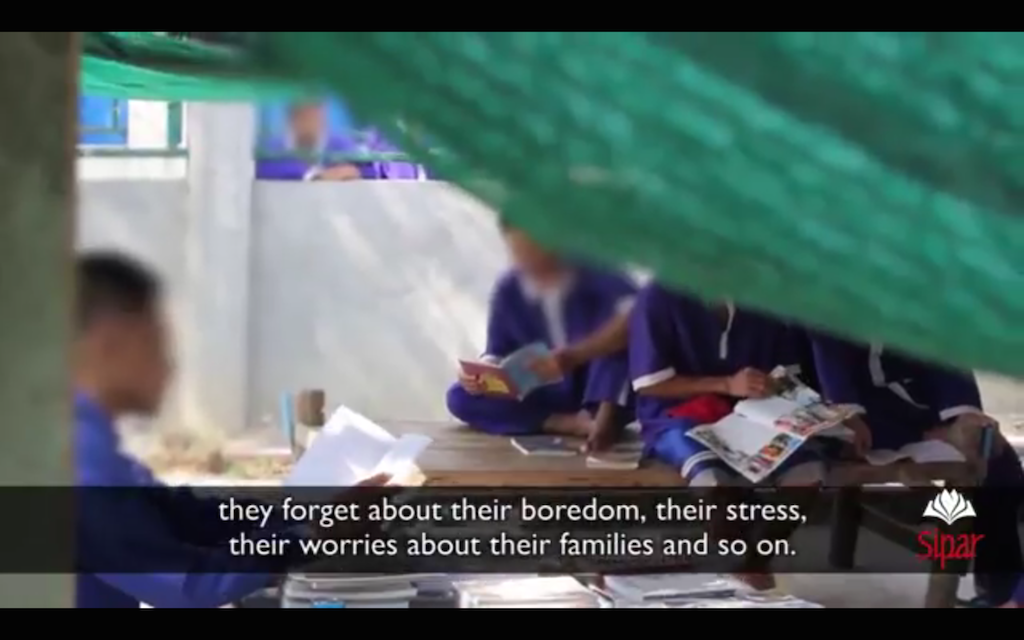 A view of a prison library shown in a video by Sipar.

The final phase of a $2-million prison library project aims to turn a third of inmates into readers and “change their attitudes from bored and violent to having compassion for one another.”

Education NGO Sipar on Wednesday signed an agreement with the Police Academy and the Interior Ministry’s prisons department to continue the project for its final three years before handing it over to the government.

“First, we make detainees who have never read books become book readers. Second, they change their attitudes, from bored and violent to having compassion for one other,” said Sipar director Hok Sothi.

Benefits included stress reduction and alleviating the feeling of depression among inmates, Sothi said. The library program could even reduce overcrowdedness in prisons, he said, though he did not explain how.

Cambodia’s prisons are notoriously overcrowded, with some filled to six times their capacity, according to monitoring by rights group Licadho.

“With no libraries, prisoners gossip. Thanks to the libraries, they are able to read and discuss on different topics instead,” one prisoner says in a video on Sipar’s website. “For instance, ‘How to feed pigs’ or ‘how to plant vegetables?’”

The third phase of the project, running from 2019 to 2022, has a budget of $530,000 and goals of reaching 35 percent of inmates in the country’s 27 prisons as well as training almost 90 prison officers to continue the program.

“This work will not finish,” said Nuth Savna, spokesman for the prisons department. “This work needs to be sustainable — it needs support, not only from the public sector but also from nongovernmental organizations.”

The project, which began in 2016, is supported by the French Development Agency (AFD) and Pierre Bellon Foundation in its final phase.