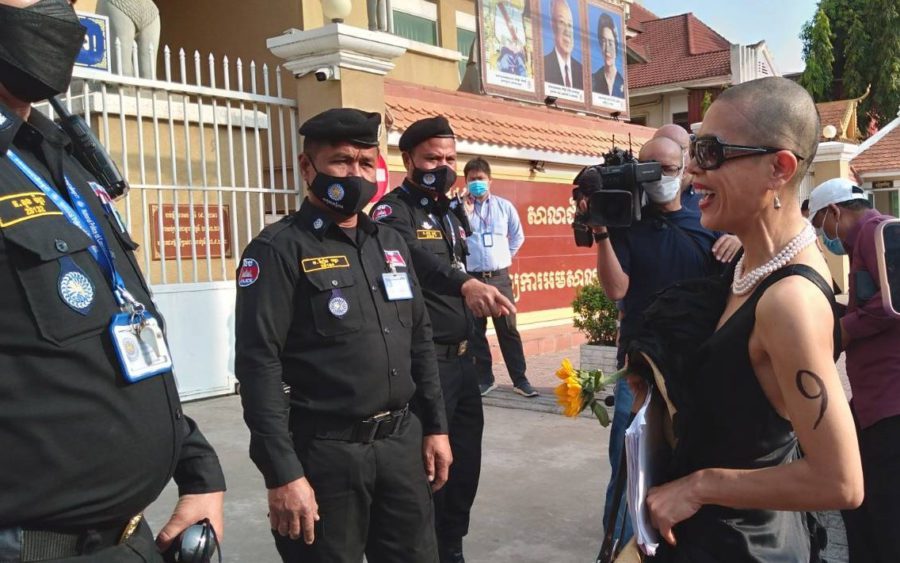 CNRP supporter Seng Chan Theary was asked to explain the use of terms like “illegitimate government” and “dictatorship” in Facebook posts that are being used as evidence against her in the mass trial of CNRP leaders and members.

The CNRP mass trial, one of four proceedings against leaders and supporters of the party, includes more than 40 defendants who are charged with incitement and plotting. The trial commenced in November 2020 but was delayed during the peak of the Covid-19 outbreak.

Chan Theary, one of the defendants in the case, was questioned last week about Facebook posts she made that were critical of the government.

The defense on Tuesday took up the nine Facebook posts in question and got Chan Theary to clarify her intentions behind them.

The nine posts included her expression of support for former CNRP president Sam Rainsy’s planned return to Cambodia in November 2019, photos of her raising nine fingers, and other posts that included calls for the toppling of the “illegitimate government.”

When defense lawyer Choung Chou Ngy asked about one post, Chan Theary said she wasn’t sure if those were her own words and that she was likely using CNRP leader Sam Rainsy’s messages.

Then Chou Ngy asked if she supported ending a “dictatorship regime,” again referring to the same post that was allegedly from Rainsy.

She also listed the killing of political commentator Kem Ley and popular unionist Chea Vichea, corruption and the destruction of natural resources as other issues that were of concern.

Prosecutor Seng Heang took umbrage with her use of “illegitimate government” in one post, saying the government was internationally recognized. Sam Rithy Veasna, another prosecutor in the case, chimed in that Cambodia was also chairing Asean this year.

Chan Theary replied that international criticism following the 2017 and 2018 elections was evidence of the government’s illegitimacy.

“For me, I still believe sources are saying that the government is illegitimate,” she said.

Judge Ros Piseth asked if it was right for Chan Theary to post about toppling the government and inciting them to potentially commit crimes.

Chan Theary said, “It is beyond right. If it was not right, I would not have advocated for it till now.”

On Wednesday, Chan Theary said her response to judge Piseth was in relation to his question about “toppling” the government and that she had earlier in the trial repeatedly advocated for peaceful and nonviolent means to achieve this.

The story was updated on March 2, 2022, to include comments from Seng Chan Theary.