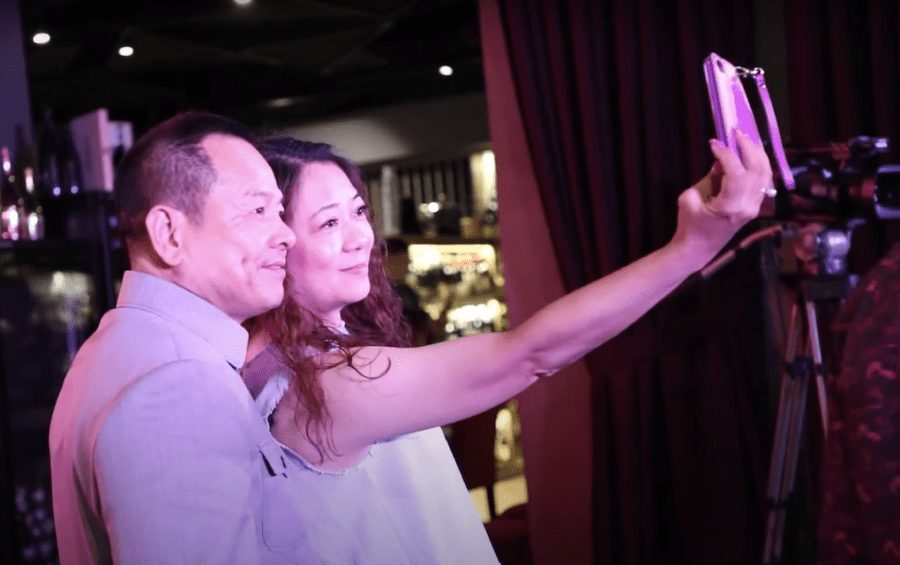 Former Macau crime boss Wan Kuok Koi, also known as “Broken Tooth,” takes a selfie with a woman at a ceremony in Kuala Lumpur in July 2018 marking the establishment of the World Hongmen History and Culture Association headquarters, in a screenshot from a promotional video.

An ex-Macau crime boss sanctioned by the U.S. this month partly for links to newly established businesses in Cambodia was accused by prosecutors upon his 1999 arrest of working to build an arms factory here, according to reports at the time.

Wan Kuok Koi, known as the former boss of major crime organization the 14k triad in Macau, was sanctioned under the Magnitsky Act on December 9. Also known as “Broken Tooth,” he spent almost 14 years in prison for criminal association, loan-sharking and illegal gambling before being released in 2012.

In 2018, he launched the World Hongmen History and Culture Association in Cambodia at a ceremony attended by Deputy Prime Minister Men Sam An and military police chief Sao Sokha. The association is linked to a cryptocurrency and security businesses.

Martin Purbrick, a former Hong Kong police official involved in political intelligence and organized crime investigations, said Wan generated considerable fear both in Macau and Hong Kong during the triad conflict in Macau in 1997 and 1998.

“Wan visited Hong Kong regularly with his girlfriend to go shopping, and when he arrived he was sometimes guarded by several off duty Hong Kong Police CID officers,” Purbrick said, referring to the criminal investigation department.

After his release from prison, Wan struck out on new business ventures outside Macau, possibly aided by former associates in the Macau triad who no longer wanted to be tied to him, he said.

“Wan may have chosen Cambodia for one of his business ventures as he and his brother had business links to the country before he was arrested,” Purbrick said.

In 1999, the South China Morning Post reported on the prosecution’s case against Wan, a 60-page brief that told how documents had been seized at Wan’s home relating to “a project for the installation in Cambodia of an arms factory.”

An Associated Press report from later that year also noted allegations of arms deals during a trial hearing at the Macau court. The court was told that investigators found “what appeared to be a fax concerning the potential purchase of guns, missiles and armored cars from arms merchants in Cambodia,” A.P. reported.

At the time, arms smuggling out of Cambodia resulting from the country’s legacy of war was well-established, according to experts.

“[I]n the 1990s Cambodia was awash with small arms,” said Carl Thayer, emeritus professor at the University of New South Wales, in an email. “Cambodia was a buyer’s market because of the availability of small arms, continued unrest in the countryside, lax laws (legal arms exports did not request information on the end user), and poor governance/corruption.”

An armed clash in 1997 between military factions allied to co-prime ministers Hun Sen and Norodom Ranariddh added to the lawlessness, he said.

A 2002 book issued by the Australian National University — “Small Arms Production and Transfers in Southeast Asia” by David Capie — says Cambodia at the time was “the largest supplier of used small arms to various insurgent and terrorist forces in the Southeast Asia [region].”

Wan, meanwhile, appears to be following the flow of online gambling across Asia. Macau had been one of its centers until a ban on online gaming there in 2016, due to fears of money laundering, pushed the business to Sihanoukville. The Cambodian coastal city experienced a boom until online gambling was also banned here at the beginning of the year.

In March, Wan launched Saixigang Industrial Park in Myanmar’s conflict-torn Karen state. Asia Gaming Brief reported that the company behind the venture promised an $18 billion investment and that the area “will surpass Cambodia’s Sihanoukville in only three years.”

The U.S. Institute of Peace, a state institution working on conflict resolution, says online gambling is already happening among related developments in the state.